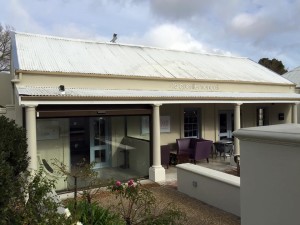 Today is a day of announcements of property sales in Franschhoek, it would appear.  This morning we announced that we have sold our Whale Cottage Franschhoek. Now it has been announced that Mr Aniljit Singh of The Leeu Collection has added Le Quartier Français to his property portfolio in Franschhoek, taking over from 1 September. It is a surprise for many that the hotel and restaurant property has been sold, if not a relief for many Franschhoekers!

Mr Singh fell in love with Franschhoek in 2010, when he visited Cape Town to attend the World Cup soccer. Last year he bought the Dieu Donné, Von Ortloff, and Dassenberg properties, creating a 21-bedroom 5-star luxury Boutique Hotel Leeu Estates, as well as the 12-bedroom Rusthof guest house (to be renamed Leeu House), both to be opened later this year.

Le Quartier Français was one of the first hospitality businesses to attract attention for Franschhoek, the father of owner Susan Huxter buying the property for her 25 years ago. In early days the hotel side dominated world attention, making top global accommodation lists, and putting Franschhoek on the map. Huxter’s radical decor taste led the awards to wane, but awards for their restaurant The Tasting Room took over, being the only South African restaurant to feature on the World’s 50 Best Restaurant list year on year.  As Chef Luke Dale-Roberts climbed up the World’s 50 Best Restaurant ladder, first at La Colombe, and then at The Test Kitchen, The Tasting Room gradually 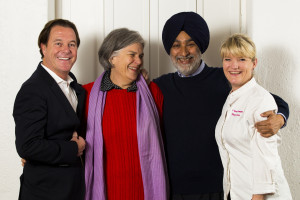 slid downwards, to now be ranked 88th on the list! The Tasting Room Chef Margot Janse, who has been at Le Quartier Français for 20 years, and her team will stay on, as will all the hotel staff.

Franschhoek tourism players will be relieved to hear the news, as Huxter used to see herself as the custodian of Franschhoek, and decided which players she liked and which not. Her business reached the lowest of low when Reuben’s opened in Franschhoek in 2004, The Tasting Room falling off the Eat Out Top 10 Restaurant list for three years when Reuben’s became the number one restaurant in Franschhoek within six months of opening in 2004, and in 2005 too!

Mr Singh said about his latest acquisition: ‘I am passionate about South Africa, its energy and sense of place.  This latest acquisition makes me excited because I love to be part of creating something special. The team involved in the Leeu Collection portfolio, headed by Hector de Galard, shares this excitement and is determined to create world-class experiences in a luxurious environment of which Le Quartier Français will form a part. This opportunity is a natural for us’.

It will be interesting to see how Mr Singh and his team will transform Le Quartier Français and The Tasting Room, to bring it back into the top accommodation and restaurant league, respectively. No General Manager was appointed when Linda Coltart left Le Quartier Français last year, its bouncer Roger Boonzaaier running the hotel, and Eleanor Kerwan the restaurant.  Will Mr Singh appoint a new GM to pull the business together again, one wonders.  One thing that will change for sure is that customers that have been banned from Le Quartier Francais over the years will be welcomed back with open arms again!