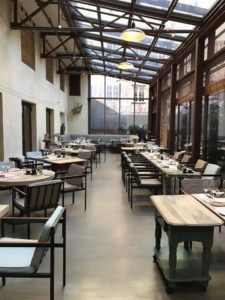 Last week I ate lunch at Garden restaurant at the renowned Bayerischer Hof hotel in Munich, a spontaneous decision after having done some business with Deutsche Bank across the road. I was super impressed with the service offered by the proactive PR department of the hotel, but did not like the arrogance I experienced!

I had booked Atelier, a Michelin 2-star 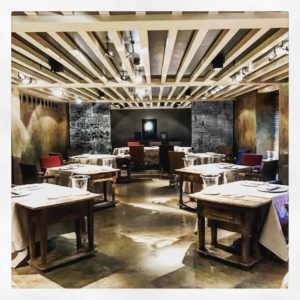 restaurant, also in the hotel, but was on its waiting list for dinner, given that it was Valentine’s Day. I decided to pop in, to check on the status of my booking. There was no Atelier staff on duty, but a hostess from Garden was very friendly, allowed me to see the Atelier restaurant interior, and to have a look at its menu. She told me that the Atelier staff only arrive in the afternoons, and then call customers who have booked, to check if they were still coming. I was number three on the waiting list.

While I am always an optimist, I decided to have lunch at Garden, being the closest I would get to Atelier, should I not get a table at Atelier, even if only physically! I was offered a table at Garden, and a waiter brought the menu, professionally presented in A3 size. I declined the wine list, and requested water. Tap water is not an option in top restaurants, so an (€8) 330ml bottle of Evian was brought to the table. Luckily I had seen a mention in very fine print that bread costs extra, at €2,30, and I was offered it by the waiter without him mentioning the price. I declined, not so much due to the cost but due to the boringness of the bread options, being ciabatta and seeded rye.

The restaurant space looks like an addition to the hotel building, in a glass conservatory, possibly having taken the space of a garden previously, but there was no sign of any garden outside. The decor design of both Atelier and Garden was done by Belgian interior designer Axel Vervoordt, a rare public design project, better known for his design of palaces, private homes, and luxury apartments. The designer is known for his ‘discreet yet unmistakable style’. The Garden restaurant design is described as an artist’s studio, with Pastellone floors linked to oak floorboards, an unplastered effect on the walls, and re-made furniture made from antiques.  Garden was previously a larger restaurant, now divided into two restaurants: Atelier and Garden. Garden seats 50 guests, and can add an additional 40 when the weather improves. Atelier is much smaller, seating only 25

patrons. I loved the painting in Atelier by Dirk Vander Eecken, referred to as ‘fault oval’. Garden chair cushions are in mint green, beige, and light green. The larger tables are rectangular, on trestles, with a distressed look.

I was informed about the interior design by a media release which was brought to my table by Miriam Haase from the hotel’s PR team. I had given the Garden hostess my business card, as a reminder of my request for the Atelier table for that evening, and she must have passed it on to her PR colleagues.

Waitrons wear a charcoal grey overcoat, which looked like a dressing gown to me. The media release informed that they were designed by Dries van Noten.

The wooden top table did not have a table cloth, but beige material napkins, Peugeot salt and pepper grinders, a vase of beautiful freesias, a beige linen placemat, and an old-fashioned oil and balsamic vinegar holder with cork stoppers was also on the table. Each table had a table extender/side table, if extra space is required.

I was presented with the Menu, but my eye 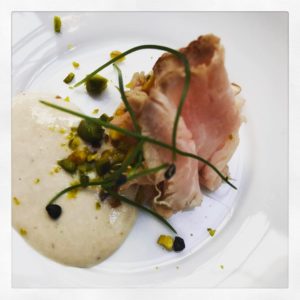 had caught the menu of the day, being duck breast, Savoy cabbage purée, and carrots (€28), which I ordered. A surprise Amuse Bouche of Vitello Tonnato was served.  The duck breast serving 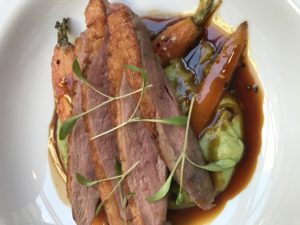 was generous, was prepared rare, and the skin had been rendered, a perfect dish.

I ordered the peanut and caramel chocolate Gateau, quite hard to eat with a spoon, with a sugar spiral, Mandarin sorbet, mandarin 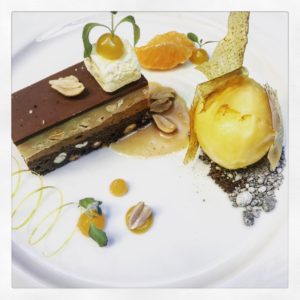 slices, and chocolate soil on which the sorbet rested, to prevent it from rolling around the plate (€11,50). I ordered a dry cappuccino, which cost €5, and was accompanied by five pineapple tonka bean biscuits. Even though I do not need milk or sugar for my coffee, I loved the 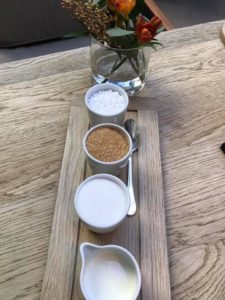 presentation of the bowls of white and brown sugar, sweetener, and the milk jug on a board.

The waiter who seemed the most senior, based on age at least, was extremely arrogant when I asked him for the name of the Garden chef. When I asked him to spell the surname of Sous Chef Philipp Pfisterer, he told me to spell it as one pronounces it! The Head Chef of both restaurants is Steffen Mezger.  A shock was the hotel’s arrogant wifi policy, a fee of €9 per hour being levied, also to guests eating in the hotel restaurants. Only accommodation guests do not pay for the wifi.

I left the hotel with a promise from an Atelier staff member that I would be called, no matter what the outcome about the Atelier table, later in the afternoon. I am still waiting for the call…! When Dallmayr Michelin 2-star restaurant called later in the afternoon, offering me a table for the evening (I was on their waiting list too), I accepted immediately! My Dallmayr Review is on this Blog.