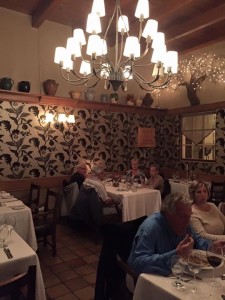 I had read good thing about Helena’s Restaurant at Coopmanshuijs, and was left with an impression that it was a must-try restaurant. It was a severe disappointment when I had dinner there last night, especially in terms of service and ambiance.  It does not match the level of the 5-star hotel in which it is located.

I had booked earlier in the day, when I walked past, surprised to find the 16-bedroom five-star hotel on popular Church Street in Stellenbosch. When I arrived just after the World Cup Rugby had come to an end, a different receptionist sat in the entrance, and found my name on her list. I was asked a number of times how many were in my party, but I was clearly on my own! The receptionist stretched out her hand, as if she wanted to hold my hand as one would with a child to lead the way! I was shocked that we entered the restaurant via the industrial kitchen, the most unspectacular restaurant entrance I have ever experienced! I was given a table in the middle of two rows of tables on my right and on my left, sandwiched between a ten-seater table of Americans, and two tables of German tourists.  I was the only local to eat at the restaurant!

The lady who turned out to be the manager, Mari Smit, wanted to rush me through the menu, but I was first wanting to check out the restaurant and make notes about the interior. She insisted on telling me that the soup of the day was leek and potato, and that the linefish was kingklip. She offered me bottled water, which I declined in favour of natural water!

A rare complaint about restaurant chairs is that the height of the table and chair seat are mismatched, but this was the case at Helena’s Restaurant, the chair seat being too low for the table height. The table had a candle in a silver candle holder, a glass vase with a pincushion protea, imported Peugeot salt and pepper grinders, imported Hepp Exclusiv cutlery, a tablecloth, and a material napkin. Nothing about the decor was matched: the dated black and white/silver 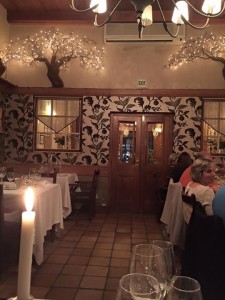 patterned fabric wallpaper, the wood strips in-between, the high wooden shelf/pelmets with a vast collection of multi-colored pots, and a big central ‘chandelier’ and matching wall lamps on two sides. The restaurant space is divided into two, and we were all crammed into one space. Odd was the decor touch of two trees high up on the walls, decorated with fairy lights! A reserved table for four did not arrive. Lighting is on the low side, and unfortunately influenced my photographs. There is no music at all, and when the American table had left the room, all we heard was the hum of the refrigerators from the next door kitchen, and the clang of falling cutlery on the kitchen floor!

I was not allocated a specific waiter, and had a variety of persons bringing and clearing the dishes. The menu is printed on cream board, only revealing starters and main courses, so I asked for the dessert menu too, 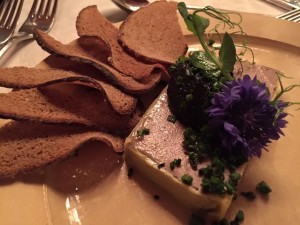 to choose either a starter or a dessert. I placed the order, and within five minutes the starter of duck liver pâté served with an ugly-looking black over-sweet olive jam and finely chopped chives arrived. I had to scrape off the jam as it completely dominated the delicious creamy pâté (R60). It was accompanied by Melba rye toast. I had not been served bread, and asked Mari about it. She seemed surprised, and it took another ten minutes for the designated 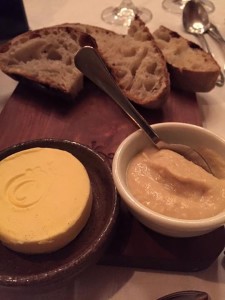 bread person (who had deemed it more important to clear tables of vacated tables elsewhere in the restaurant) to bring thick wedges of very chewy ciabatta, good farm butter, and a mushy looking hummus.  An Olyfberg olive oil and balsamic vinegar holder accompanied the bread board. There was no apology from the bread-lady. The soup of the day is charged at R60, a mezze platter costs R75, and gnocchi with prawns and pesto costs R75 too.

Given how quickly the pâté had been served, it took a far longer time to be served the rolled deboned pork neck with carrot purée, pickled carrots, bits of 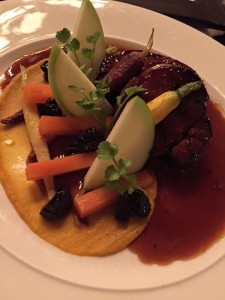 prune (including the pip), and refreshing slices of green apple, giving color to the dish (R140). Quite some time after serving the main course, two further dishes arrived: very quickly described by Mari (they are not mentioned on the menu), being accompaniments to all main courses, it would appear: slaphakskeentjies (I tried to imagine how they would explain this to foreigners, being spring onion – should be small onions – in a mustard vinegar sauce) and 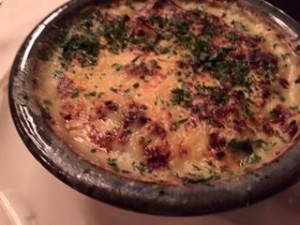 The Coopmanshuijs hotel opened in 2010 as a five-star hotel, and Helena’s Restaurant only moved in two years ago. I cannot recall which restaurant preceded it. The Chef is Clinton Jacobs I was told. Helena Pieterse is the owner, but she rarely comes to the restaurant, occasionally to eat there as a guest, and it showed badly!

The promise at the bottom of the menu of ‘where the familiar is made spectacular‘ is a joke, being completely exaggerated and not what I experienced. Mari disappeared for long periods, and never came to check on my satisfaction with the starter, but I had to laugh when she asked during the main course ‘is everything okay with you‘! I told here that I was fine, and that it was a rather personal question. The hotel and restaurant seem to ‘work’ TripAdvisor, and are first and fourth, respectively, on the Top 10 Hotels and Restaurants lists in Stellenbosch on that website. When the hotel leaflet claims (as per August 2015) that ‘since opening in 2010, Coopmanshujs Boutique Hotel has consistently ranked #1 among all hotels in Stellenbosch‘, and the restaurant leaflet claims ‘Since opening in 2013, Helena’s Restaurant has ranked in the Top 10 restaurants in Stellenbosch on TripAdvisor’, I smell a fat rat! I had asked Mari for their Twitter handle, and she told me that they don’t have one, but that they ‘do TripAdvisor‘! Mari has only worked at the restaurant for three months, and was the weakest link there last night!