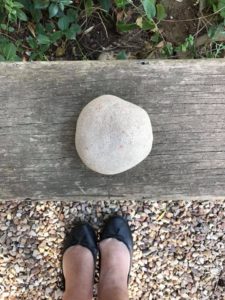 Last week, over a four-day period, I experienced the gift of a Silent Retreat at Temenos Retreat in McGregor. The essence of the Silent Retreat is to not speak and to look inward, learning to love oneself.

Four fellow Retreatants and I met for the first time at dinner on Monday evening, all of us from Cape Town other than one person from the U.K. We shared dinner in the Poetry Room, a special vegetarian buffet having been prepared for us. Michael Pettit and Margaret Johnston prepared all the dinners, with a mouthwatering and moreish mushroom risotto prepared by Graham Goble, and they very kindly put all onion and garlic ingredients on one side. Our first dinner was a gazpacho, halloumi, baked potatoes, cheeses, and fruit. No alcohol was allowed during the Silent Retreat. I was lucky to sit at the same table with a very special lady, and we connected immediately. We were still able to speak, so we got to know more about each other. None of the Retreatants knew each other. Three of us had been to Temenos previously.  Contact with the outside world and Social Media interaction was not advised. Not handling the phone was a tough challenge, especially to use it as an alarm clock for the 7h00 activities, not my favorite time of the day.

After dinner we went to The Well, where meditations were scheduled 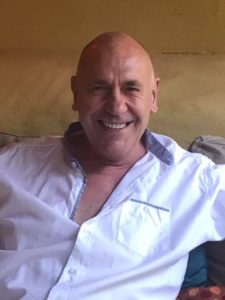 three times a day, led by Billy Kennedy, who established Temenos twenty years ago. He explained that the daily schedule we had received for the four days gave rhythm to our Retreat. ‘Letting go‘ was an important part of the Retreat, as was journaling our feelings, reading  books with spiritual messages, booking body therapies, and participating in physical activities (walking, swimming in the lovely large pool, Bowspring yoga, and Qi Gong yoga). Billy was available to us if we got stuck with the silence and meditations. He encouraged us to be ‘your own best teacher’.

Billy guided us about Silence, inviting us to accept that ‘Silence called you’, to consider how we fill our lives with busyness, certainly a challenge for me. He said that our body would talk to us. I had a toothache prior to arriving in McGregor, and it was severe on the first day of the Retreat, but disappeared thereafter, not feeling it again while at Temenos. We were to focus on loving ourselves, ‘develop compassion for yourself’, and recognize how hard we are on ourselves. Billy referred to Silence as a ‘she‘, and encouraged us to listen to our true self, to be with nature, not hard to do in the magnificent garden on the 1 ha property, which is passionately maintained and watered. Billy said that ‘Grandfather Sky and Grandmother Earth’ were supporting us. Expressing gratitude for the gifts we receive, even the simple and ordinary ones, was encouraged. 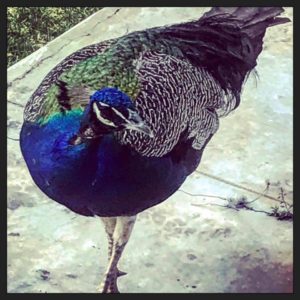 Having lots of time to read and explore, I read the room book in detail for the first time, not having done so on the two previous visits. I was fascinated with the importance of the peacocks at Temenos, not only physically, but also symbolically in its logo. The book informed that the peacock denotes holiness, nobility, guidance, protection, and watchfulness, and is a symbol of integrity 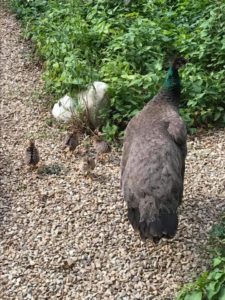 and beauty when we show our true colors. The book also explained the meaning of the number of calls of the peacocks, one call addressing the leader within one, seven calls bringing sense of safety and security and rest, eight calls embracing abundance in life, and nine calls denoting imminent fulfillment.  Every morning a family of peacocks, with parents and four babies, visited my cottage. I did photograph the peacocks on numerous occasions, being fascinated with the chicks in particular.

We shared breakfasts and vegetarian dinners in the Poetry Room, and this was an interesting challenge, sharing tables but not being able to speak with the fellow Retreatants. When one does not speak while having a meal, one tends to chew one’s food longer and better, yet the meals were over within half an hour. Often we sat together, connecting with each other in the comfort of our Silent togetherness.

Billy guided each of the twelve meditations over the four days, and in each he read a quote from a book, inspiring each meditation of about 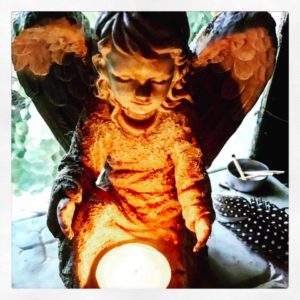 fifteen minutes thereafter. These are some of those which touched me:

‘Small channels flow noisily, the great flow Silent. Whatever is not full makes noise, whatever is full is quiet’.

‘Silence is the source of your greatest strength’

‘Let Silence take you to the core of your life’

‘Love is whispering in your heart; in the whole of existence. Just tune your ears’

‘Silence invites me to wait – to listen rather than talk, to turn to the still inner voice first rather than last’.

‘Silence reminds me to stop, to look and listen, to see and smell – to 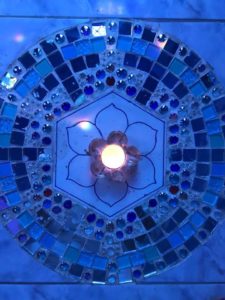 pay attention to what is going on around me, rather than thinking of what next to say, where next to be, what next to do’.

‘Begin to become aware that you can actually listen to Silence. Discover for yourself that it has a quality and dimension all of its own’.

I enjoyed Qi Gong yoga as a first gentle introduction, and Charmaine Horsburgh was very patient with my novice status in her Bowspring yoga classes. I was intrigued with a Reiki session, and its power of touch and connection with deceased family members. I rediscovered my love for swimming, and will work on 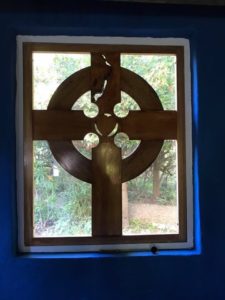 expanding my pool size once the water situation in our city improves.

In concluding our Silent Retreat, Billy encouraged us to put any negative thoughts we had into a black balloon, and to let it go. I loved the invitation to Sing, Dance, Praise, and Love, which I saw written in The Little Way chapel.

After shared coffees during which we could speak again, we exchanged contact details, and thanked each other for the support we received during the four days, a touch by hand, or connecting by hugging and eye contact.

I interviewed Billy, to learn more about him and Temenos. He went to school at The Holy Cross Convent in Johannesburg, and met Michael Pettit there, and they have been friends ever since, both involved in the running of Temenos, with Margaret Johnston and Graham Goble. Billy  has many interests, including swimming (he swam for Southern Transvaal), opera (he sings), piano (he plays), and poetry (he established the Poetry Festival in McGregor six years ago, and writes poems).  But it was his spirituality that drove him initially, after he completed his music studies in Vienna (he can still speak German), attending a Catholic Seminary locally to train for the priesthood. He worked with Mother Teresa’s brother in California in this time, and after eight years of study he reached a crisis point prior to his ordination, as he could only represent one religion. He moved back to his other love, music, and became a TV producer, focusing on opera programs and documentaries. At this time he was also involved with the State Theatre in Pretoria, at which I had spent nine months in 1981, although our paths never crossed. It was during a sabbatical in the USA that the idea of Temenos came to him, a Retreat embracing all and no specific religions.

The building housing the Tebaldi’s restaurant and reception was 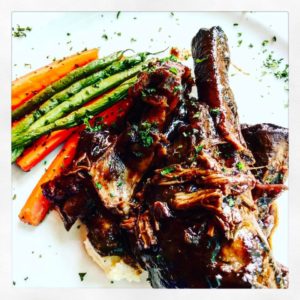 built in 1856, and was a ruin at the time that Billy bought it. He bought the first erf, and built the first two cottages on the property, subsequently adding more erfs, until he owned a 1 ha property. Michael had previously worked at the Carlton hotel in Johannesburg, and thereafter in recruitment in Cape Town. He joined Temenos 15 years ago, 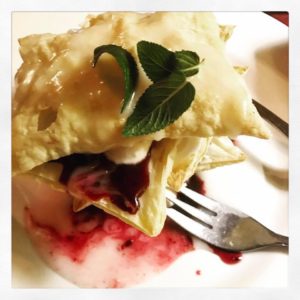 and is in charge of the restaurant kitchen. Billy told me that Renata Tebaldi was the best Italian opera singer, a rival to Maria Callas, and he had the luck to meet her in Milan. He loved her music so much that he named the restaurant after her. Meals have an Italian focus, but not exclusively. I enjoyed a lamb shank and a Mille Feuille, and at another meal Arancini, butternut ravioli, and Tiramisu, when we were allowed access to the Tebaldi’s menu after the Silent Retreat had concluded. Billy is the resident ‘DJ’, playing a lovely range of music throughout the day and evening, including classical music (I cried on my first day at Temenos, being so moved by it over breakfast), opera, French music, Portuguese Fado, and more. Throughout the interview Billy demonstrated his humility, praising others in the role they have played in making Temenos the special place that it is!

Temenos is a spiritual Retreat at which one can rejuvenate and learn to find and love oneself, in a most beautiful garden setting brimming with bird life.