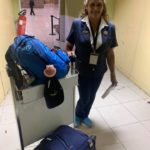 The Sweet Service Award goes to Osmery tour guide from Havana, who was kindness herself in helping me to trace my suitcase at the Lost & Found department at Havana airport, after it had traveled to Havana without me, due to not having been sold a Visa for Cuba by Iberia. Osmery showed me where the money exchange is, and then called her taxi driver husband to drive me to the BnB I am staying at. 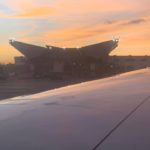 The Sour Service Award goes to Iberia, the worst airline I have experienced.  As I was in Europe, and more specifically in Spain already, I booked an Iberia flight from Madrid to Havana. The slightly cheaper alternative option from Madrid  would have been AirEurope, and I wished I had taken it. The flight is nine and a half hours long.  Dealing with Iberia two years running, a disaster each time, has made me decide to never use them again. Last year they cancelled a flight to Nice, due to a French aircontroller strike, and we were accommodated in Madrid at the airline’s expense. This year I was stopped at the boarding gate, and asked for my tourist visa, which the airline did not offer as part of its package, but is the usual way for one to obtain it. As I booked my flight whilst I was walking the Camino in Spain, all communication from the airline has been in Spanish. I was deemed to be in the wrong, and had to book my own accommodation in Madrid, for two nights, as the flight could only be rebooked for two days later, at a ‘small’ penalty of about R2000, in addition to the R10000 one-way ticket cost. I was not the only one to be left behind by the airline, and I saw a passenger looking heart-broken and crying. My suitcase went off to Havana without Iberia making any attempt to stop it, as I was told by the ground staff of the airline, which was a challenge in 36C Madrid! Iberia has a department and counters throughout Madrid airport,  but they must be the worst ‘Customer Service’, I being told different things by the staff at various counters, including going to the German Embassy in Madrid to get the visa there (!), or going to a travel agency in the airport building, without telling me how to find it. I found the travel agency El Corte Viajes, paid about R1000 for the visa, and I could have got onto the flight if all of this had been picked up at my check-in four hours prior! The check-in staff had no clue, this being a very expensive error, costing me the accommodation in Madrid, the cancelled accommodation in Havana for two nights, and the ticket re-issue fee! I have detailed this experience, to make sure any prospective visitors to Cuba buy the visa prior to departure, best at a travel agency. The food served on board Iberia, as well as the restricted beverage offering, and the sloppy service by its staff completes the disaster that is Iberia, owned by British Airways, I was told!