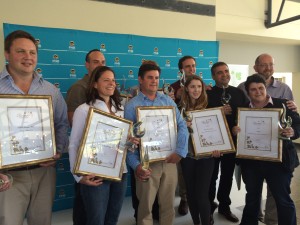 I have not been to Nitida wine estate in Durbanville in a long time, nor to its Cassia restaurant.  As the FNB Top 10 Sauvignon Blanc awards were held at the wine estate, it was a good opportunity to revisit, and to experience the new function venue, which comfortably seated 120 guests for lunch yesterday.

Invited guests included two representatives each of the FNB Sauvignon Blanc Top 20 shortlist, writers, and FNB staff as well as their clients.  Prior to the lunch, each of the 20 Sauvignon Blanc producers manned a tasting table, and provided information, making it a good opportunity to rub shoulders with other guests.   A 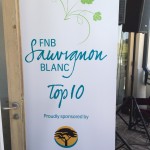 number of lesser known wine estates were in the Top 20 list, with well-known brands too.  Background music was provided by a guitarist and a violinist.

The tables were generous in size, with a centre display of a mirror onto which four vases of flowers, all in white and including carnations and tulips, with the FNB blue added via vases. A material serviette was neatly folded and professionally 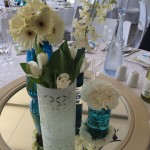 ‘wrapped’ with a FNB branded ‘ribbon’.  The table looked professional and promised a good meal, despite one of the wine glasses on our table not having been washed properly. We had Nederburg winemaker Razvan Macici sit at our table, with his newly appointed assistant winemaker Heinrich Kulsen, who has grown through the Cape Winemakers Guild Protégée Programme. Chandré Petersen of Spier is also a graduate of the Program, and she and Heinrich were included in the judging panel as junior judges. Razvan looked sad  when speaking about losing one of his right hand men next month,  when I asked about winemaker Wilhelm Pienaar’s departure to Hermanuspietersfontein. Funny is that Heinrich joined Nederburg from Hermanuspietersfontein two weeks ago.  The replacement for Wilhelm will be announced by the end of the week, Razvan promised.  I asked Razvan about the new Nederburg TV commercial, 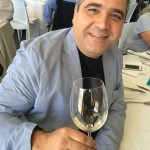 in which he indulgently throws glasses of red wine onto the floor, until he tastes the perfectly made glass of Nederburg wine!  About 24 glasses were harmed in the making of the TV ad!  He has received some feedback about it, concern being expressed about the wastage in terms of the broken glasses as well as the wine.  He said the longest part of the shoot was getting the perfect splash and glass breaking when it was thrown on the floor.

The beautiful setting of Nitida in the hills of Durbanville was described by the MC Johan as ‘God’s backyard‘.  If the fog had reached Durbanville, it had lifted by the time we arrived, making it a comfortable temperature day, and showing off the luscious green vineyards through the stacking doors of the venue, all of which had been opened up.  Stephan Claasen of FNB thanked the wine industry for creating so much employment, and commented that he had seen workers in the Nitida vineyards at 7h00 when he cycled past the farm yesterday morning.  He said that the volume of exports has increased to 525 million liter (or 26%) between 2012 and 2013, produced by 3300 wine estates. He shared the marketing program for the FNB Top 10 Sauvignon Blanc winners, showcasing them at the Slow Lounges in our airports. He also committed to the use of the Top 10 Sauvignon Blanc brands at FNB functions. 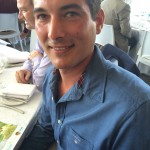 Thys Louw of Diemersdal is a young champion of Sauvignon Blanc, the family wine farm being synonymous with the wine variety. As Chairman of the Sauvignon Blanc Interest Group, Thys described the changes which had been made in the Group earlier this year, a new steering committee having been selected, which includes Duncan Savage of Cape Point Vineyards, JD Pretorius of Steenberg, and Erika Obermeyer of Graham Beck.  He was a good diplomat, thanking the writers present for writing about their wines, and about Sauvignon Blanc.

Charles Hopkins of De Grendel praised his judging panel, which consisted of James Pietersen, Richard Kershaw, Cathy van Zyl, Winnie Bowman, Miguel Chan, and Jacques Steyn.  He said that the Top 20 wines used grapes from twelve origins, including Stellenbosch, Coastal, Western Cape, Nuy, and Darling. Only 8% of the 199 wines tasted had faults, and he provided a fault breakdown.  Fewer than half of the wines were 2014 vintages, reflecting what a difficult year it has been for many winemakers. 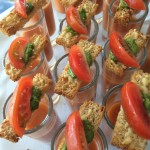 Screwcaps were used in 70% of the entries.

Prior to the Top 10 being announced, we had been served a Gazpacho shooter, nicely presented with a piece of toast and tomato delicately balancing on the shooter glass.  This was followed by a starter of seared tuna, served with lemon aioli and a pineapple salsa, an interesting combination of fresh flavours. 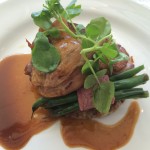 The main course was a duo of free-range duck with rosti, fine beans, and a very zesty citrus juice.  Each table had the two wines of the Finalists sitting at our table, in our case being the Nederburg Arnold Graue The Young Airhawk 2013 wooded Sauvignon Blanc and Stellenrust Sauvignon Blanc 2014.

Then it was time for the FNB Sauvignon Blanc Top 10 to be announced:

Each winemaker had to say a few words, and it was former Sauvignon Blanc Interest Group secretary Pieter de Waal who brought 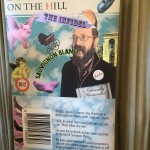 the house down, when he thanked notorious Neil Pendick for the award, as his persistent negative reporting about FNB’s sponsorshop of the Interest Group and De Waal’s handling of his position (with an insinuation of results bias in 2013) had led De Waal to resign and enabled him to enter his wine this year, which made Top 10.  The audience collapsed in laughter and cheered De Waal.  Funny is how pathetic Pendick misleadingly turns this around in his blogpost about the event today.  The question on everyone’s lips was how the organisers of the event could have been silly enough to have invited him! 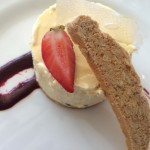 The function ended off with a passion fruit baked cheese cake, served with almond biscotti.  Cassia did well in handling the lunch preparation for such a large group, while the serving staff was a little tardy in proactively bringing ice or filling glasses.  It was a long event, the only criticism I heard expressed about it at another function yesterday afternoon.