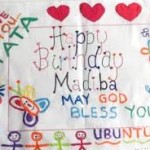 The Sweet Service Award goes to all the South Africans who honoured former President Nelson Mandela on his 95th birthday yesterday, by giving 67 minutes of their time to help others, including operating soup kitchens, giving talks at schools, making sandwiches for learners at disadvantaged schools, collecting clothing and blankets, volunteering at the Oranjezicht City Farm, reading at a retirement home or hospice, donating blood, volunteering at an animal shelter, serving tea and cake at old age homes, painted school exteriors, offered TB and HIV screening,  provided free horseriding lessons for disabled children, brought joy to sick children at the Red Cross Children’s Hospital, and did many more good deeds in honour of the father of the nation.

The Sour Service Award goes to the World Cup construction companies WBHO, Murray & Roberts, Stefanutti Stocks and other companies for having been found guilty of ‘collusive tendering‘, according to The Times. More than 300 cases of ‘bid-rigging’ were identified with country-wide ‘uncompetitive behaviour’, which included paying losing bidders a fee, ‘sham tenders‘ and agreements on who bid for which projects and at which margins!  To date 15 companies have been fined R1,46 billion in total, each of the three mentioned companies paying more than R300 million in terms of a settlement deal with the Competition Commission.  Group 5, Construction ID and Power Construction have not negotiated a settlement deal, and will be investigated. The fines apply to bid collusion for the building of the Cape Town Stadium, airport upgrades, highway improvements, and other projects. Ironic is that the City of Cape Town (with the Western Cape province) and its ratepayers, which  are likely to have been ripped off through the collusion, has contracted Group Five to build its MyCiTi Bus stops and stations throughout Cape Town!

POSTSCRIPT 28/7:  The Times reported this week that the City of Cape Town has appointed a team of experts ‘to investigate if the cost of the R4,2 billion Cape Town Stadium had been inflated‘. It also reports that the City is ‘ready to sue the contractors who conned it‘.