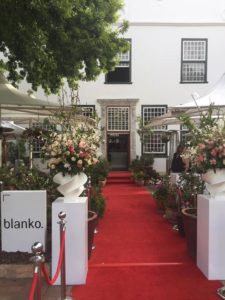 On Thursday evening The Alphen hotel hosted hundreds of Constantia and Cape Town VIPs, to present its transformed blanko restaurant, previously 5Rooms, which was the name of the restaurant when the hotel was first taken over by the Kove Collection five years ago. 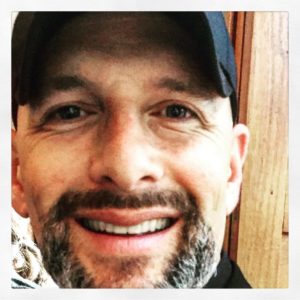 black, and wearing his trademark cap, and walked the floor, interacting with his roughly 700 guests. The weather was perfect, guests spilling out onto the front terrace, and finding space in the three restaurant rooms, and around the bar.

Kovensky’s Kove Collection transformed the three star The Alphen Hotel into a five star boutique hotel after signing a 30 year lease. Stefan Antoni was the 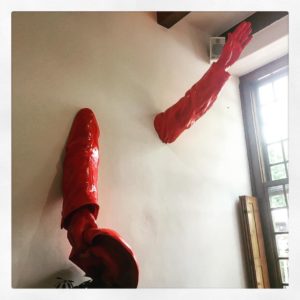 architect for the transformation.

From a colourful interior previously – for example a strong blue in the first room on the right – all the walls of the restaurant are now painted white, and hung with mostly large paintings by South African artists, curated by the Goodman Gallery. With the help of Marina Nestel, the owner of The Little Black Book who is able to magically attract crowds of trendsetters to her clients’ functions, I was very quickly supplied with the names of the artists of the paintings and other works of art which I had photographed at the function, when I requested them from her 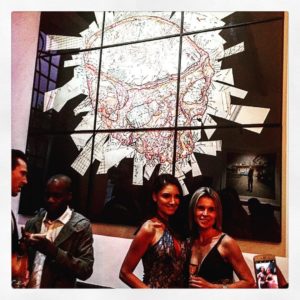 yesterday afternoon. The work with the red body parts is by Haroon Gunn-Salie and is called ‘Soft Vengeance (Cecil John Rhodes)’. The work on the right is by Gerhard Marx, entitled ‘Land’s End Composite‘.

I arrived half an hour before the start time, to photograph the renovated minimalist space, before the crowd arrived. All lighting is the same in each of the rooms, and there is cohesion throughout the restaurant, making it feel like one entity, instead of five separate rooms previously. I did have a soft spot for the blue room, which was hung with portraits of all the well-known personalities who had stayed over at The Alphen in its heyday, each with a story to tell. Paul told me that they still have the paintings, now stored upstairs, which came with the 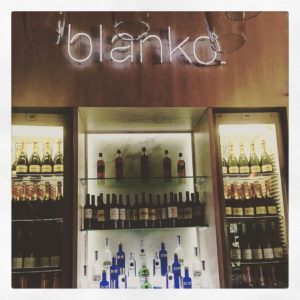 hotel when his company signed the lease.

The bar has been modernized, and was where one could collect a glass of Krone sparkling wine if a tray of flutes did not reach one, especially as the evening progressed and 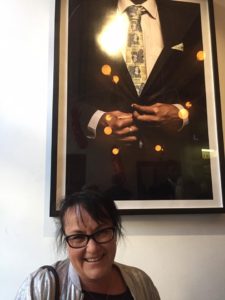 I bumped into Eat Out judge and awards co-ordinator Abigail Donnelly twice during the function, and we had a good chat.   She told me that the Top 20 Restaurant shortlist is to be announced next week. She stood velow Gerald Machona’s ‘Keep Calm and untie the Noose’ (below). Her husband Terry came to fetch her, to take her to dinner at the 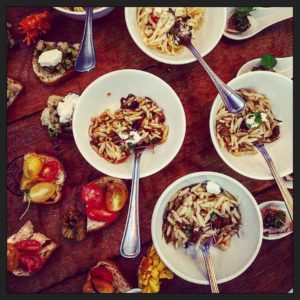 The kitchen struggled to cope with the growing size of the crowd, and we were advised to stand close to the kitchen entrance, good advice in getting to photograph some of the canapés. The wild mushroom risotto was very popular. Asparagus risotto was also served, as was bruschetta with feta and zucchini.

All the restaurant tables and chairs had been removed from blanko, to make space for all attending.  The media release sent to me on request describes the interior: the ‘gallery-style space reflects the contemporary style synonymous with the Kove Collection‘. It describes the tables as being Italian marble-topped, with textured fittings, and ambient lighting. The gallery-like 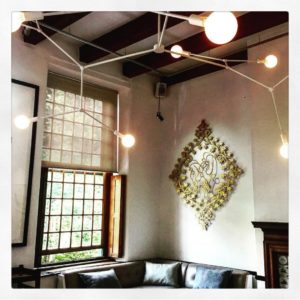 The blanko restaurant is said to reflect the Kove Collection philosophy of offering fresh food and good service inside spaces of innovative design. The Kove Collection Group Head Chef Amber-May Deetlefs said that the best food is ‘prepared from the heart‘, and should taste good, be sincere, and should be uncomplicated.

The new blanko promises to be an interesting contemporary restaurant set in one of Cape Town’s oldest hotels, and is the first to create an art gallery setting for its patrons, allowing them to enjoy a meal and drinks, and even to leave with an artwork to take home!  I will return to review the food, wine, and service.