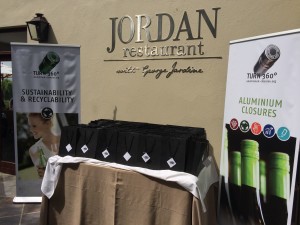 An invitation from Waterford Communications to attend a function of the Guala Closures Group, the European Aluminium Foil Association (EAFA), and South African aluminium producer Hulamin sounded interesting in terms of content. Eat Out Top 20 Restaurant shortlist Jardine at Jordan as function venue was an added attraction.  A passionate case was made for the benefits of using aluminium closures for wine bottling. 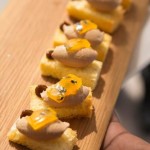 duck paté canapés, which were served with passion fruit jelly, and prune purée, on brioche.  Buffalo milk mozzarella, confit tomato and basil was also served as a canapé.  We sat at large round tables, covered with brown table cloths and a white overlay.  We received a bread platter, which included ciabatta, Cape seedloaf, and vetkoek, served with porcini butter, watercress pesto (with overpowering garlic), and aoili. 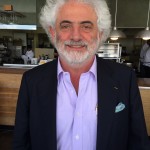 function, representing 75% of the aluminium producers in our country.  An association of manufacturers of closures was established, so that the industry can speak with one voice.  It was predicted that the entire wine industry could move to aluminium closures, as they can be recycled indefinitely.  Michael Fridjhon spoke eloquently about cork having long been superseded by aluminium, due to the rate of taint and oxidation from cork.   With cork the wine producer is held liable for a corked wine, when it is out of the producer’s control. Corks don’t last forever, Fridjhon said, and any problems relating to screwcaps happen at bottling. He explained that often mobile bottlers are used, and their equipment is not always tested for cleanliness by the wine producers.   He encouraged wine producers using such mobile bottlers to embrace the full responsibility for the bottling.

Proud winemaker Bruwer Raats brought along a bottle of Chenin Blanc, the first to be bottled under screw cap in our country, and 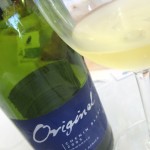 he wanted to confidently vouch for aluminium closures.  We were all allowed to taste a tiny drop of this historic wine.   Ken Forrester was not able to be present at the function, but made a contribution via video broadcast, and criticised cork for ‘having a mind of its own’, and being able to carry infections.  One cork in one bottle may not be identical to the cork in another, and this can affect the wines, and their consistency, or lack of!  Forrester described cork as a ‘random piece of bark which dictates the destiny of the wine‘! Cork allows oxidation, not beneficial to wine, and both red and white wines benefit from aluminium closures.

Guido Aufdemkamp told us that an international ‘Turn 360°’ multilingual marketing campaign has been launched internationally, to encourage the use of aluminium closures for beverages.  In 2013 16 billion closures were sold internationally, used for spirits, mineral water, olive oils, pharmaceuticals, and wines, the latter category showing the fastest growth in usage.  Sustainability and recyclability are the major benefits of using aluminium closures, providing greater wine consistency, showing tampering, and being able to be stored upright or upside down.  It is neutral from an organoleptic point of view, and tends to be more cost-effective than traditional closures. The closures can be used on glass as well a PET bottles.  It offers design benefits too, allowing branding on the caps.  It is easy to open, and requires no tools!   When opening the wine, no foreign parts can fall into the wine, as can happen with cork!   One can close the bottle of wine after drinking one glassful, and this makes serving wines with aluminium closures by the glass attractive to restaurants and hotels.

More than three-quarters of all aluminium production  in the world is still in use due to its recycling benefits. Next year Hulamin will open an aluminium recycling plant in Pietermaritzburg, a R300 million investment.  Research conducted internationally shows that younger consumers generally, and females specifically prefer closures, because they preserve freshness and aromas. New Zealand’s use of aluminium closures in wine production is as high as 95%, followed by Australia at 80%, and roughly 60% each in our country and in Chile. Germany too is at an almost 60% usage level, and the UK is close to 50%.   Guala Closures Group is a multi-national company founded in Italy 60 years ago, and has 24 ISO-certified production facilities around the globe.  In Cape Town the Guala Closures SA factory has operated for 50 years already, and is the only local closures company able to foil onto the sides and tops of closures.  They will launch tamper-evident closures soon. 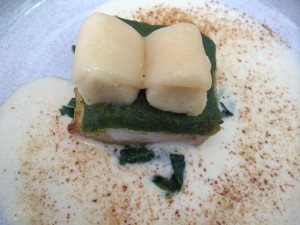 I was interested to see all the cutlery for the main course laid on the left, and our waiter tried to explain that plate sizes differ, and therefore they do not lay the fork and knife on either side of the plates.  He tried to explain that they choose the left side for the cutlery, because that is where the sideplate is, which was a cutlery convention I had not heard of before!  The starter was salted East Coast hake, covered with a soft herb crust, and served with gnocchi, Parmesan, and a sauce brandade (made with salt cod, celeriac, potatoes, garlic, milk, butter, and olive oil), which was paired with Raats Family Old Vine Chenin 2012.

The main course was roasted and braised Karoo lamb, served with pomme dauphine, baby carrots,butternut purée, and crushed broadbeans, paired with Ken Forrester 3 Halves 2007.  Separate containers of crispy chips and garden salad (with a very salty dressing) were brought to the table, 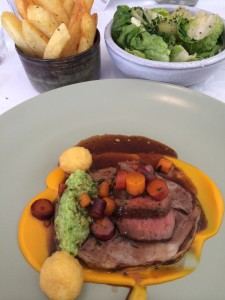 and we had to request spoons to serve them onto our plates. 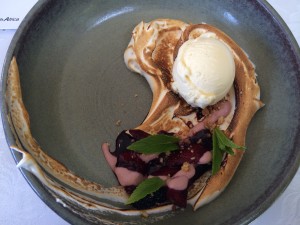 The plating of the refreshing iced mulberry compote, served with burnt nougat, vanilla ice cream and strawberry curd, was unusual in coming over the edge of the bowl, and was paired with a delicious KWV Mentors Noble Late Harvest 2012.  I was served a cup of perfectly made dry cappuccino.

Jardine at Jordan has a very special location, and it was a lovely summer’s day for the lunch, the stacking doors having been opened completely to let the joys of nature inside. For the restaurant’s sake one hopes that the Eat Out judges were not served by the two waiters I interacted with at the lunch.  The waitress serving the welcome drink did not know what the duck paté canapé consisted of. Her colleague serving us at the table demonstrated his irritation with us not stopping talking when he wanted to introduce the bread and spreads platter to us.  He knocked me on the head with a plate during the lunch, without an apology.  I was shocked to see Chef George Jardine chewing gum while plating our food, and trying to blow a bubble while doing so!  The casual dress of the managers was a surprise too.  It was lovely to see the bubbly and professional deputy Restaurant Manager and sommelier Isabella Immenkamp again, whom I got to know at Burrata.

It is a surprise to observe the unprofessional and childish behaviour of Amorim Cork Public Relations Consultant Emile Joubert, who has tried to disparage the Guala Closures Group, and the work it does in promoting aluminium closures, instead of promoting the benefits of cork in wine production.  One wonders how Amorim Cork can allow him to stoop to such a low, with a Tweet bordering on hate speech but subsequently removed, on behalf of their product and brand!

Disclosure: We received a bottle of wine and a loaf of bread from The Bakery at Jordan with our media pack.