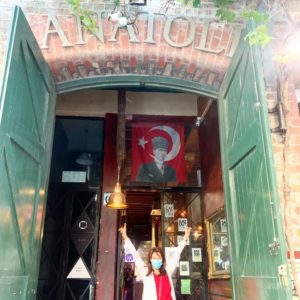 Anatoli Mediterranean Restaurant has been serving Modern Turkish cuisine for the past 37 years in its home in Napier Street in De Waterkant.  Originally created in 1984, Turkish Chef Tayfun Aras owned and ran the restaurant for many years. The restaurant changed hands more recently, the current owners having changed very little about the restaurant to date.

Anatoli has tweaked its menu, to add a broader Mediterranean touch to it, without losing any of its popular dishes such as the flat breads, the Mezze tray, and many of the main courses and desserts. And the belly dancing on Saturday evenings remains, adding a vibrant and colourful touch to the dinner.

I was invited by Anatoli GM Russell Zieff to try Anatoli again, last having eaten there about 30 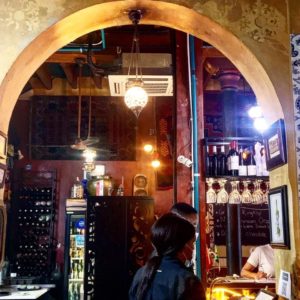 years ago when I first arrived in Cape Town from Johannesburg. I invited my friend Jenny Stephens to join me for the dinner. I had requested a table at the window in the entrance section, which gave me good lighting for taking photographs, and which felt comfortable for Jenny in getting fresh air from a Covid perspective.

Anatoli is on a busy section of Napier Street,  but we found parking easily on Prestwich Street. Tables had been set up outside on the pavement, already giving the restaurant a Mediterranean and welcoming touch. The restaurant has huge barn doors, with its branding above 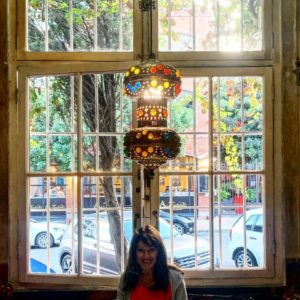 it, and a creeper softens the brick exterior, one almost thinking it is a vine, from which they would make the dolmades.  A banner of Mustafa Kemal Atatürk, the founder of modern Turkey, hangs above the entrance door, and is seen elsewhere in the restaurant.

Manager Cathy Colli welcomed us, and did the Covid protocol with us, measuring our temperature, sanitising our hands, and taking our contact details. Waiter Patsho was allocated to look after our table, offering us water immediately. He told us that he has worked at Anatoli for twelve years already.  He brought us a winelist, 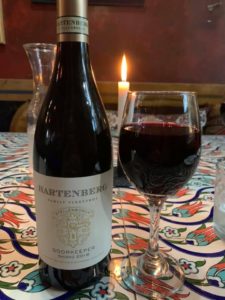 with standard as well as Turkish cocktails listed too.  Jenny and I each ordered a glass of Hartenberg Shiraz 2018 with our meal.

There is no menu at Anatoli. Patsho explained that we could order one of three choices of flatbread,  plain, garlic, and one spiced with Turkish Zaatar, a mix of thyme, coriander, cumin, sumac, sesame seeds, salt, and chili flakes. He would bring us a tray of hot and cold Mediterranean Mezzes, from which we could order those that we liked. There were main courses to follow, the options discussed verbally, as well as dessert options, presented on a tray too.

I took some photographs in the second section of the restaurant, where the other diners  were seated, decorated with Persian carpets, Mediterranean plates, and numerous Turkish artefacts which former owner Tayfun had used to decorate his restaurant, and still in place. We met belly 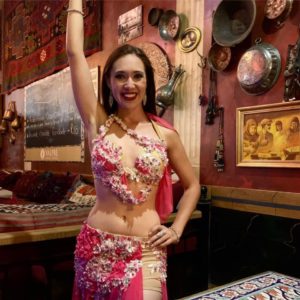 dancer Beth Howell, who came to say hello, and told us that there would be an engagement, she bringing the marriage proposal to the lucky lady at the end of the last of her five belly dancing  songs. It was hard to do justice to her belly dancing moves in photographs, as they are so fast, but I managed to capture  them in a video, which I could send to the happy couple. Cleverly she was dancing with a plate and cloche in the last song, and then moved over to the young lady, while her beau went onto his knee, with a note requesting her 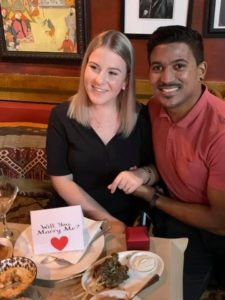 hand in marriage on the plate, and he offering her his engagement ring. The whole restaurant clapped to congratulate the happy tearful couple. I do not recall that there was belly dancing when I last visited Anatoli.

The tray with the Mezzes was brought to our table, each on a separate small plate with only one item of the portion that is served, making them look much smaller than they actually are. Each has a plastic dome over the dish, for hygiene purposes, not ideal to photograph. Each Mezze costs R55.  I remembered the waiter giving one the Mezzes one wanted to eat straight from the tray, but this is no longer done, each Mezze being freshly prepared. 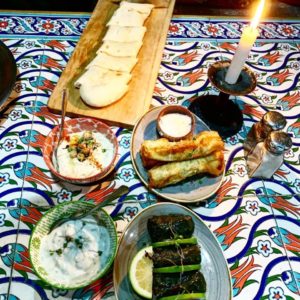 Jenny and I kept mainly to the hot Mezzes, ordering Lamb Kofta (three on a stick each) served with yoghurt; crispy prawns (three) wrapped in Kataifi pastry and served with harissa mayonnaise; and phyllo pastry cigars filled with butternut (three). To this we added a bowl each of hummus and tzatziki. What makes this lovely tasty variety of Mezzes so filling is the flatbread which accompanied them, Jenny and I sharing a plain one, which Patsho sliced at the table. In retrospect 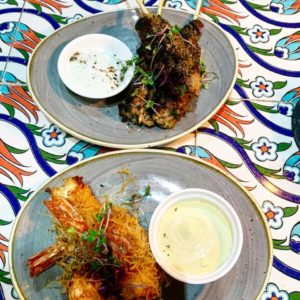 this was more than enough for the two of us. 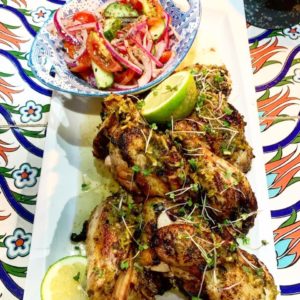 However, we were encouraged to try a main course, the flame-grilled baby chicken basted with a choice of Harissa and Lime, or Lemon and garlic, which comes with a side salad, or Mediterranean roasted vegetables (R145). As I am not partial to garlic, Chef Jacques du Toit agreed to use lemon only for the basting, not quite to Jenny’s taste. We chose the side salad as the accompaniment. Other main course options are confit shoulder of lamb (R190); grilled fish (SQ); flame-grilled Fillet (R195); a Vegetarian moussaka (R130);  a Vegetarian Butternut and roasted summer vegetable Korma with sambals (R130); flame-grilled lamb kebab (R175); and a Vegetarian Mediterranean Orzo salad with chickpeas, feta, olives, and more (R85). The 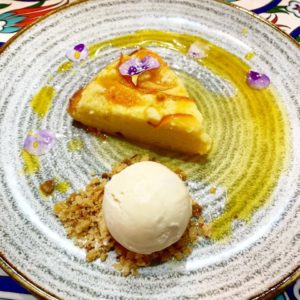 I had seen the dessert options on a tray at the open plan kitchen when I took the engagement photographs. Patsho presented the dessert tray to us at the table, I ordering an orange milk tart with an added scoop of vanilla ice cream on request, and Jenny the Baklava. 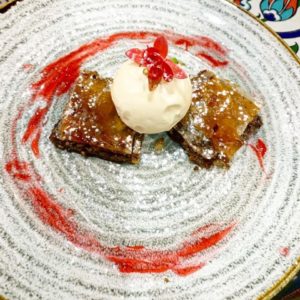 Other dessert options are Rose panacotta, and white chocolate cheesecake, all costing R65. Chocolate Fondant was listed on the Specials board, at R85.

Jenny ended off our Mediterranean evening 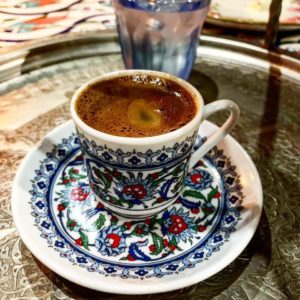 with a Turkish coffee, served in a special Turkish tray. She was warned by Patsho that it is strong, but as she had visited Turkey before, and therefore she was knowledgeable about the coffee.

Our evening was enjoyable, unrushed in that we left just before 22h00, were well looked after by Patsho and Cathy, and decidedly had far too much to eat. The Mediterranean Mezzes were the hit for us, and there are so many more to try on next visits.