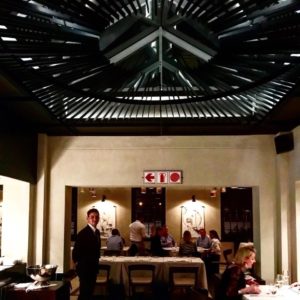 #. Roast & Co has opened alongside HQ, in the former Bizerca Bistro space, in Heritage Square

# The Hard Rock Café has opened in The Promenade in Camps Bay.

# Davy Croquettes has opened in Gardens.

# Chef Sheldon Raju has announced the opening of an African restaurant in Camps Bay this summer.

# Bootlegger Café & Grill has opened in Constantia in conjunction with Chef Eric Bulpitt of FABER, next door to Foxcroft, in the former Greens.

# The Franschhoek Beer Co is opening its eatery shortly.

# Marrow has opened in Loop Street.

# Tiger’s Milk has opened in the SanClare Building in Claremont, in Century City, in Bryanston, in Stellenbosch, and in Pretoria. Tiger’s Milk Cedar Square opens in Fourways in November.

# Chef Bertus Basson is the new Chef Patron of the Bertus Basson @ Ritz Hotel Revolving Restaurant in Sea Point. The opening of this restaurant is continuously being delayed, with a number of reasons cited for this.

# Terra Madre has opened in Elgin, for lunch on Fridays and Saturdays, owned by Nicole Precoudis.

# Woolworths has opened a health restaurant NOWNOW on Longmarket Street, at Old Mutual, and in the Silo District in the V&A Waterfront. It is now run for the retailer by TriBeCa, operators of the WCafés.

# Melissa’s is opening in Hermanus.

# Hussar Grill has opened in the Protea Hotel in Franschhoek.

# The Hungry Herbivore has opened

# Jason’s Bakery is to open on Main Road in Green Point.

# SCHOON has opened in Somerset West, after its closure in Stellenbosch and handing over its space to Boschendal. It is a disappointment to any past patron of the former Stellenbosch operation.

# A Steakhouse is said to be opening in McGregor.

# Vigour & Verve has opened at the new Sunsquare in the Cape Town CBD.

# The Yard has opened in the Silo District in the V&A Waterfront.

# Coco Safar is to open in Sea Point.

# Kleinsky’s Delicatessen has opened on Church Square in Parliament Street.

# The Kove Collection is opening Bilboa restaurant and Chinchilla Rooftop Bar in Camps Bay this month.

# KapaTee has opened on Church Street, as a store and tearoom.

# La Paris Bistro & Deli, and wedding and event venue, has opened outside Franschhoek.

# La Petite Manoir is to open in Franschhoek.

# Chef Duncan Doherty has opened a long table-style restaurant at Colmant in Franschhoek in November.

#. Si Cantina Sociale eatery and bar has opened in the Silo District in the V & A Waterfront

# Afro’s Chicken is to open at 4 Spin Street.

# Beerhouse is opening another branch in Cape Town, and in Durban in December.

#. Chef Jan-Hendrik van der Westhuizen of JAN restaurant is to open a restaurant in the Cape.

#   Limnos Bakery has opened in the V&A Waterfront.

#   Oui restaurant has opened at Radisson RED in the Silo District of the Waterfront.

#   Patina has opened in Newlands.

#   Limnos Bakery has opened in Cavendish Square, and will open in Table Bay Mall in April.

#   Ribs & Burgers is to open in Table Bay Mall

#   The White Rabbit has opened in the V&A Waterfront, another restaurant in the Kove Collection.

# Baked Bistro on Long Street and at Regent Road in Sea Point have closed down.

# Bon Appétit Keam Restaurant has closed down in Grabouw.

# Mother’s Ruin on Bree Street has closed down

# Flora’s Eatery in McGregor has closed down.

# Tre Steampunk has closed in the city centre.

# The Bromwell in Woodstock appears to have closed.

#   La Belle Bistro & Bakery in Mouille Point has closed down.

# The Long Table Restaurant and Café at Haskell Vineyards closed last year, and will re-open in November after an extensive renovation, upgrade, and general maintenance, to be run by the winery itself when it re-opens.

# Zenzero in Camps Bay has reopened, after an extensive renovation.

# The Italian owners of La Sosta in Swellendam have sold the restaurant. It is operated under the same name by the new owner.

# Eats11 has opened at Villa Exner in Grabow.

# Café Des Arts in Franschhoek has been sold.

# Panama Jack is moving to the Cruise Liner Terminal in the Cape Town Harbour at the end of November.

# Boston Burgers on Buitengracht Street has changed its name to Craft Burger Bar.

# Janse & Co is opening in the former Yuzu space on Kloof Street in December, owned by Chef Arno Janse van Rensburg of Maison, with Liezl Odendaal.

# Heritage Cottage has opened where Mon Desir used to be in Hermanus, operated by Chef Warwick Taylor of SOURCE, with Head Chef Dean van Huyssteen.

#   Boschendal at Oude Bank has opened in Stellenbosch, where SCHOON de Companje used to be, as a Boschendal Farm Shop, Bistro, Bakery, and wine tasting facility.

# Chef Angelo Scirocco is opening WF, his own restaurant, in Pretoria.

# Chef Brad Ball has left Peddlars on the Bend, and is now Executive Chef at the Harbour House Group.

# Sidwell Yarrow has been appointed as Executive Chef at La Petite Ferme.

# Chef Kieran Whyte has left Charango, and is the new Head Chef at Delaire Graff.

# Jürgen Welp and Simon Rudd have been appointed as GM and Deputy GM, respectively, at the new Tiger’s Milk Kloof Street.

# Sommelier Pearl Oliver has left the Taj, to join the One&Only Cape Town.

# Jakobus Lochner is the new Restaurant Manager at Maison.

# Alice Mfundsi is the new GM of La Paris Bistro & Deli, and the Estate, outside Franschhoek.