I laughed when I received your letter of 28 February in the post this weekend, to advise that I have been banned from your five star establishment, a member of Leading Hotels of the World!

You wrote: ‘This letter serves to inform you of our shock and disappointment at the manner in which you have dealt with our establishment in the social media.  As a fellow colleague in the hospitality industry I have been (sic) amazed that you have failed to address our perceived shortcomings and your concerns, (sic) directly with me, the general manager. We are fully supportive of social media, however, one should have details 100% correct before publicly. (sic) Slandering (sic) one of my team and our establishment, it is so unnecessary and unprofessional.  To this end, we wish to advise you that you are no longer welcome nor permitted to enter or be in the Taj Cape Town hotel without my personal permission. Should you enter the premises, you will be apprehended by our Security Department and asked to leave’.

You do not state which 0f the references by us to the Taj in ‘Social Media‘ you refer to:

*   was it the Tweet about the rude service from your barman during the interval of a concert at the St George’s Cathedral a few weeks ago, which I reported to your Duty Manager?

*   was it the poor accommodation at your hotel after the poor Gastronauts gourmet dinner at Mint more than 3 years ago, so bad that I chose to go home in the middle of the night?

*   was it the Tweet four months ago about the poor non-caring attitude of your Banqueting Manager Eugene Myburgh, when he showed no regard for my complaint about slipping on your dangerous highly polished wooden floor in your Banqueting section, once again reported to your Duty Manager, with no response?

*   was it the mention a month ago about your new Conference facility you are opening in The Reserve this month, mentioning my doubt that your Manager Myburgh will be capable in running it if he cannot even run the tiny Banqueting section in your hotel?

I was invited to the function in your Banqueting venue by Bradley Bouwer of SA Tourism Asia, who addressed the hospitality industry about their work.  You were in the audience, but uncollegially did not acknowledge my presence through a hello or even a nod.  I was so annoyed by Myburgh’s rudeness that I posted a complaint on TripAdvisor, but you had it removed as the review site apparently does not allow reviews from other members of the hospitality and tourism industry, even though I had used a ‘handle’ that did not reflect my name, which is common for the website!

I don’t know the Social Media policy of your hotel or Leading Hotels of the World, but let me ask you some questions about it:

1.  If you saw the negative mentions listed above, why did you not call me and check with me personally what the problem was in each instance. You tried to get Gastronauts chairman Bennie Howard to ban me from writing any blogposts about future dinners of Gastronauts, a club which no longer exists due to lack of interest.

2.  Is there a rule that any complaints about your hotel have to come to you directly?  I did not see a notice to this effect in your Reception area.  Should I have asked your permission to post my views in Social Media?

3.  More importantly, what is your policy about your staff disparaging hotel guests?  On 18 January Myburgh Retweeted a link to a particularly defamatory blogpost about us by Neil Pendick, which makes your hotel guilty of defamation too!

4.  Last but not least, your bottle store manager Pendick bears your hotel logo on his blog, and 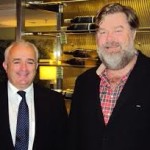 disparages me and my guest house portfolio at least three times a week, with defamatory and untrue comments.  Moreover, you feature his (out of date) list of events on the Home page of your website, demonstrating your hotel’s ownership of the petite Pendock Wine Gallery, and that Pendick is on your payroll! The wine industry is aghast that you should commit marketing suicide for your hotel in associating with Pendick, when he slates anyone and everyone writing about wine as well as winemakers and sponsors of wine competitions, just because he cannot handle criticism, which he so liberally is able to hand out to others!  Your hotel likes to associate itself with top level wine events (e.g. the recent Taj Classic Wine competition – I missed your thank you for the mention of the event and the winners of the trophies on my Blog!), but has no respect nor standing anymore because of your partnership with the vile and vociferous voyeur Pendick! Despite having been warned by a number of industry players about the damaging effect of your association with Pendick, your hotel has stuck with him, one of few!   Is the bottle store in your hotel even legal?

So Mr Pownall, it’s OK for your staff to disparage others on Social Media, almost daily, but you ban a blogger who writes what she observes and has experienced first hand?  Do you think that I will stop writing about the Taj Cape Town because you have banned me?  The Taj has not been on my restaurant list after the poor Gastronauts dinner at Mint, nor to visit for any other reason, given the poor staff service quality, so I have no intention to visit your hotel in a hurry.

I note a sense of paranoia from your hotel about criticism Mr Pownall – your previous Sales & Marketing Manager Theo Cromhout once wrote on a Social Media platform that I was attempting to destroy the reputation of the Taj Cape Town, laughable via one blogpost, a blog mention, and less than a handful of Tweets.  Did he not achieve this on his own with his annihilating disparagement of a complainant to Hello Peter about your hotel?!

Good luck in running your poorly performing hotel, with all the time you have to spend answering complaints about it on Hello Peter and TripAdvisor!  It is laughable that you can think that by having me thrown out of your hotel that I will stop writing about it! We will publish this letter on our Blog and spread word about it on Social Media, so that fellow Bloggers and Tweeters may we warned about entering and writing about your hotel, its restaurants, and bottle store, given your disregard for the freedom of speech, which is not in the spirit of Social Media, and so that Taj Cape Town guests can stay away, given how nasty you may possibly be to them!

Leading Hotels of the World

Consumer Protector of the Western Cape

POSTSCRIPT 17/3:  We have received the following e-mail from Theo Cromhout, former Taj Cape Town Sales & Marketing Manager, regarding his harsh and aggressive response to a complainant about a hard-hitting sales call he received from the hotel.  We stand by what we have written, the link to HelloPeter above showing Cromhout’s inappropriate response and accusation.  We do not see the need to amend anything we have written above!  Cromhout has not held back on Social Media (Reddit in particular) to disparage us and distribute ‘incorrect’ information about us (we have never met), showing his double standards!  We have advised him to contact his former colleagues, and sort out the HelloPeter problem with them!

‘I was flagged about a recent blog post where you made reference to a complaint (and myself) on Hello Peter with regards to the Taj Cape Town.  I would like to correct you on your posting, as the facts are wrong.  You should be aware that I was not employed at Taj Cape Town when this complaint was made (the Hello Peter complaint is dated 2013) as I had left the Hotel well over a year earlier, towards the end of 2011.  The “Theo” they referred to was not in fact me, but apparently another ‘Theo’ who worked at Taj Cape Town at the time.  The person complaining assumed it was myself (Theo Cromhout) but did not realize I had already left over a year previously.   They made this complaint on Hello Peter but referred to the wrong person. At the time, I had been aware of this Hello Peter complaint and contacted them to alert the error.  They reverted back to me indicating they would remove this complaint from their site.   I also contacted Willie Williams, the current Sales & Marketing Director that took over from me after I left.  He said he would contact Hello Peter to remove this inaccurate complaint from their website.  It is unfortunate and unnecessary when incorrect facts such as these are shared and distributed online and via social media, particularly when they are of a personal nature.  I would be grateful if you could please correct your blog post, considering the entire tourism industry has been copied on your ‘open letter’.

POSTSCRIPT 22/3:  In his blogpost today, Pendick admits to having fallen foul of the law by placing a staff member at the outside tables of Taj Cape Town’ Mint restaurant on St George’s Mall, offering them tastings of the KWV wines he smouses (illegally?) in his bottle store inside the hotel, without having a licence to do so.  Not good publicity for KWV and Taj Cape Town!

4 replies on “Banning bloggers not a response to Social Media criticism: an open letter to Michael Pownall, GM of Taj Cape Town!”