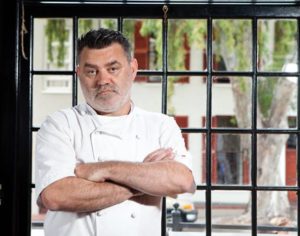 It was a surprise announcement to read that Chef Bertus Basson has been exorcised from Spice Route wine estate outside of Paarl, and that Chef Liam Tomlin with Neil and Tina Jewell are taking over this space. It makes for an interesting discussion as to why the top chefs of our country are so determined to open one restaurant after the other, and to ask if they make any money out of it!

He is followed by two five-restaurant top chef owners:

#. Chef Luke Dale-Roberts runs The Test Kitchen, The Pot Luck Club, The Shortmarket Club, Salsify at The Roundhouse, and The Commissary. This chef stays out of the limelight, and is in his The Test Kitchen kitchen, with a less prominent ego than his chef colleagues!

#. Basson now has five restaurants in Stellenbosch, an overkill in this student town one would think, with Overture, Eike by Bertus Basson, my ‘favorite’ Spek & Bone, De Vrije Burger, and The Deck. One wonders why Spice Route and Basson have parted ways, given that he was a big name brand for the wine estate when it reopened after buying Seidelberg. To me it signals that Basson’s star is waning, as the Eat Out Awards demonstrated in November. Basson juggles his hate-campaign against me as a restaurant writer, running/owning five restaurants that he is barely at himself, TV appearances, and cooking at events.

I have been told that many wine estate owners are funding the restaurant collection expansions of chefs, nothing more than ego boosting, and not financially viable without the support of their financiers. But is this good for our restaurant industry? Chefs who barely cook in their restaurants? But commendably they are building young talent, to give them a chance to grow in the new restaurant additions, usually staffing from within, as Dale-Roberts does so well.

I would welcome reader views on this topic.

4 replies on “Battle for the Restaurant collections: what do the Top chefs get out of it, other than ego?”