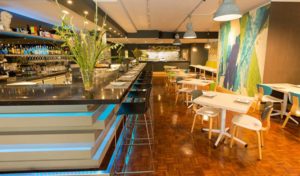 Last month Llewellyn Lambert and I went to try out Ben Wei Sushi, Asian, and Fusion restaurant in Wembley Square, by invitation from PMPR Solutions, the PR agency representing the restaurant. We were served a wide variety of Asian, sushi, and fusion foods. Ben Wei means ‘original taste’ in Mandarin. Some of the dishes we tried had not yet been added to the menu.

I had not been to Wembley Square in a very long time, so it was a surprise to see how many 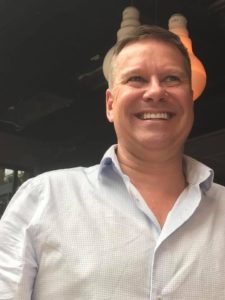 restaurants I used to know no longer operate there, and the new ones which have opened in the centre now. I had been given the information that Ian McMahon, who also runs the MCQP and owns Crew Bar in De Waterkant, and used to have a share in the Spur in 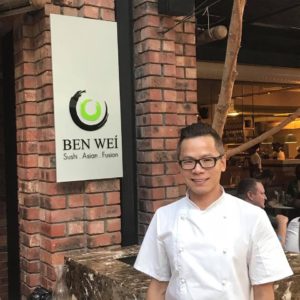 Robertson with his brother Philip (he now owns the Four Cousins restaurant in Robertson), owns Ben Wei with his partner Chef Jin Ming Dai. Chef Jin previously worked at the Vineyard Hotel and at Fugu, the restaurant previously in the space now occupied by Ben Wei.

We were exceptionally well cared for by Bryn Roberts, the Restaurant Manager, supplying information and bringing copious amounts of bowls and 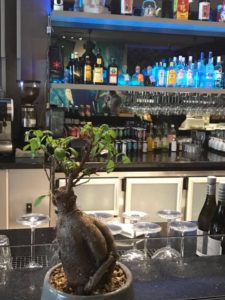 platters to our table. He told us that they had changed the decor, covering one wall with stylised dragon wallpaper which has been imported from New York. The Fugu tables with Ashwood table tops were retained, while the chairs were stripped and repainted, in a variety of colours, giving the restaurant a light and funky feel. New light fittings, imported from Germany and Italy, have been installed throughout. I loved the 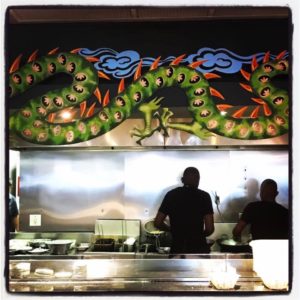 dragon over the kitchen serving hatch, which had been done by designers Purple Puppy Studio in De Waterkant. I noticed a number of Asian touches on the far counter, including a Buddha, an orchid, and a bonsai tree. There were lions to be seen too, which
symbolically offer protection to the restaurant. A vase of flowers was unusual, with flowers related to the strelitzia family. New staff have been employed. I loved the 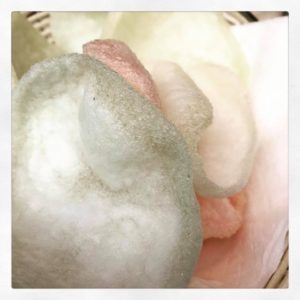 bowls, which have been imported from China.

On the table was a basket of multi-coloured prawn crackers. These appear to be part of the offering, not being charged for.

Bryn told us that new additions to the menu are deep-fried wontons, fish cakes made with tuna, salmon, and lime and coriander aioli, and Vietnamese prawn spring rolls, wrapped in rice paper. Bryn noted our dietary 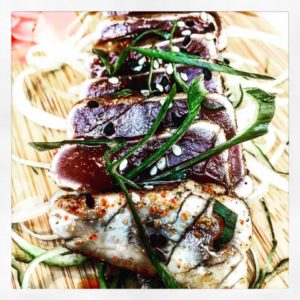 requirements, or mine specifically, and promised to not send out any dishes containing chili.

Tuna Tataki was served from the Starters list, four pieces costing R45, and was well presented. The tuna had been seared for 20 seconds, topped with reduced teriyaki sauce, and prepared with spring onion, sesame seeds, cucumber shreds, and seven spice powder. 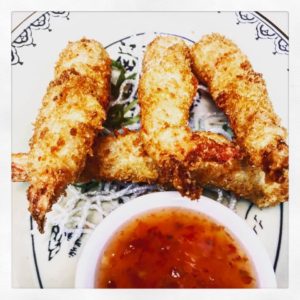 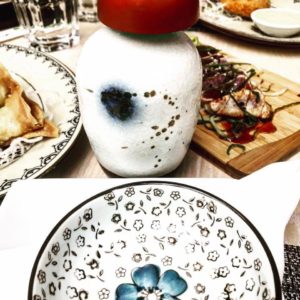 Bryn brought sake, my first experience of it, a regular Japanese rice wine made by fermenting rice that has been polished to remove the bran. They are planning to stock a plum one too. It has a very high alcohol content, at 60%. I loved the sake holder with top (photograph left).

About two-thirds of the menu is dedicated to Sushi. 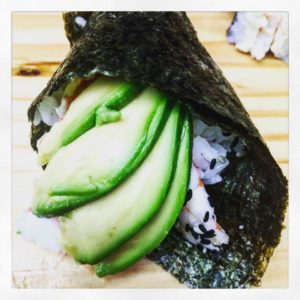 allowed me to indulge in this love. The presentation was not as neat as I have had elsewhere, but 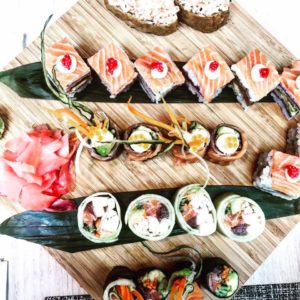 We were thoroughly spoilt with a Banting Sushi platter,  obtaining a selection of twelve Sushi items, including four pieces of salmon, tuna, and avocado bamboo roll; four pieces of slimmers rice-free maki; and four pieces of Banting salmon roses,  costing R132. Our platter had some added Sushi dishes, including prawn (R42 for two pieces) and bean curd (R38) nigiri; and Wasabi bomb (nine pieces cost R92), which is a tuna sandwich with wasabi mayo, topped with salmon and caviar.

We were fortunate that our friend Jan de Wet arrived, and joined us for a short while, to help us eat what was being sent to the table. The signature Jimmylicious Sushi, with four pieces of a prawn and cream cheese sandwich topped with crispy prawn dipped in tangy plum mayo sauce (R60) arrived next.

By this time we struggled to eat everything, but Bryn kept bringing more dishes. I loved the 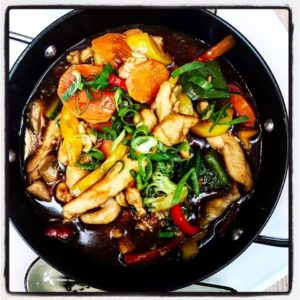 Chicken, cashew nut, and stir-fried vegetables (peppers, carrots, broccoli), with oyster sauce, and a fish, plum, and soy sauce main course (R75), which Llewellyn and I shared. This came with a bowl of noodles, served with Chinese vinegar (R29). 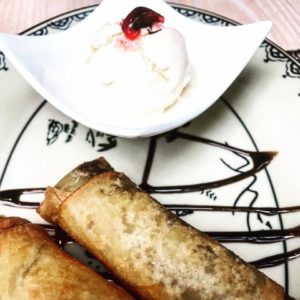 The dessert selection is restricted to three options, deep fried banana and ice cream, which I ordered (R48), deep fried ice cream (R38), and ice cream (R28). It was hard to even consider dessert, given the generosity of Bryn throughout our lunch. There were a number of dry cappuccinos interspersed in our meal too.

Ben Wei is a far less expensive Asian food option compared to Willoughby in the V & A Waterfront, but offers comparable quality with far friendlier service.