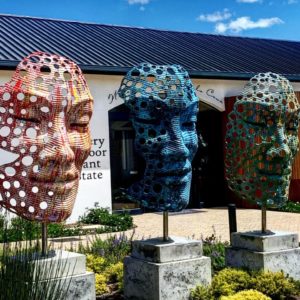 On Saturday I attended the opening of the new Art Gallery and Sculpture Park at Benguela Cove outside Hermanus, with 40 sculptures by master sculptor Anton Smit spread around the wine and residential housing estate. The local Sculpture Park flows from a collaboration between Smit and Benguela Collection owner Penny Streeter to create a Sculpture Park at its Leonardslee Lakes and Gardens in the UK.

Leonardslee has been in the local and international news very recently, its Interlude restaurant on the estate, with South African Chef Jean Delport at the helm, having been awarded one Michelin star, in less than a year after opening the restaurant. He is only the second South African chef to head up a kitchen to receive this accolade. Chef Jean previously worked at the former Benguela on Main in Somerset West, also part of the Benguela Collection, whilst heading up the kitchen there. 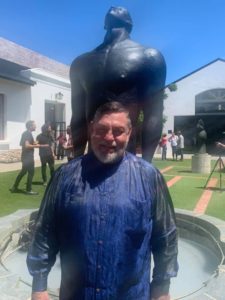 her colleagues to the event when Chef Jean received the accreditation on behalf of his restaurant. It is planned that about 100 sculptures will be spread across the vast property, with seven lakes and hectares of gardens, and more recently, a Pinotage Vineyard, the first of this unique South African cultivar in the UK. At a neighbouring property in West Sussex, Benguela Cove master winemaker Johann Fourie and his team have planted Pinot Noir and Chardonnay vines, which will be ready for harvesting next year, for the production of their sparkling wine. I visited Leonardslee with my son in May this year, enjoying Chef Jean’s Afternoon Tea, and documented what Leonardslee Lakes and Gardens entails after my visit: 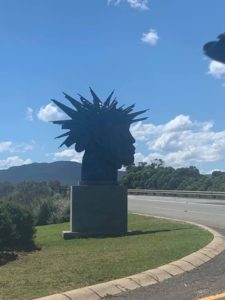 Saturday was a beautiful sunshine day, almost unbelievable after the heavy unseasonal rain which fell the day before. We were welcomed by an Anton Smit set of three multi-coloured face sculptures in the parking area, a promise of what was to follow (main photograph). At the entrance to the wine and housing estate two large head sculptures attract attention to the estate.

I was offered a glass of Benguela Cove sparkling wine, and soon saw Samarie Smith, heading up the marketing for the Benguela Cove Collection, and Penny, whom I had not seen in a while, so we exchanged notes about the wonderful Michelin star accolade, as well as about the new art gallery and sculpture park.

I walked around the property, and photographed 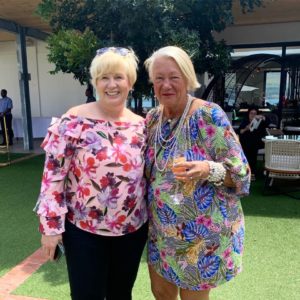 many of the sculptures, in the beautiful setting of the estate gardens, and some overlooking the Lagoon.

We were requested to enter the art gallery, and Samarie introduced Anton Smit and Penny Streeter. Anton spoke about the offering of top award-winning wines and the restaurant offering at Benguela Cove, to which another reason has been added to visit the wine and housing estate, in seeing his sculptures. The key work which 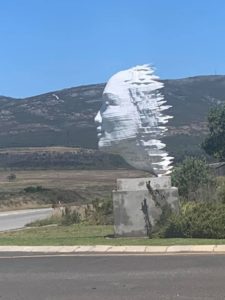 was unveiled at the opening is called ‘Oblivion of the Waves’ (Photograph left), also the name of the exhibition, an apt name given the proximity of the Indian Ocean to the estate.

Smit said about the exhibition: ‘’Oblivion of the Waves’ will suit its new home at Benguela Cove, so close to the sea. This work investigates the landscape of the soul, offering a fleeting glimpse of eternity. The dimness of our reflection in the mirror of the universe leaves us gasping for immortality as we sink into the abyss of the self’, a deeply 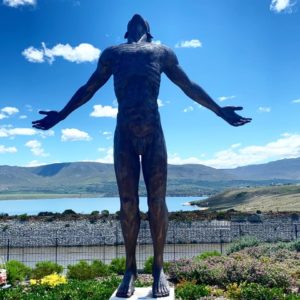 spiritual message from the artist. Each of the works is accompanied by a poem, or an excerpt of a poem, that reaches into the sculptor’s heart. He added: ‘My work is driven by faith; the spiritual essence of every piece is an answer to that inner call’.

Smit concluded: ‘We met with Penny to discuss the possibilities at Leonardslee, but before we knew it, we were discussing the inclusion of Benguela Cove. The meeting painted a larger picture to include the estate in this journey, and the decision was made between sentences that now hold the promise of something more beautiful than you can imagine’. 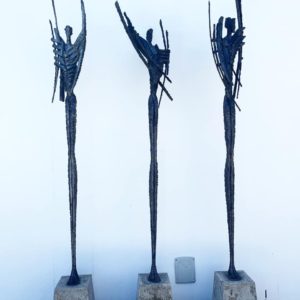 The media release I received with the invitation to attend the opening stated the following about the new Sculpture Park: ‘These art forms embrace the rich heritage, natural produce, and talent in South Africa. The terroir is celebrated through exceptional wine, local produce is honoured with delicious food, and now the art of a master South African sculptor will also grace our premises’. Smit’s work can be seen locally across our country, as well as internationally, some pieces small and delicate, and 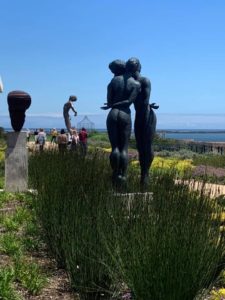 others monumental, as tall as 3 meters at Benguela Cove, and his 7 meter tall piece erected by the city council of Ghent in Belgium.

Both Penny and Smit have traveled a journey of struggle, facing setbacks but driven by self-belief to make their respective dreams come true. Not only has Penny created a most successful A24 medical recruitment group operating 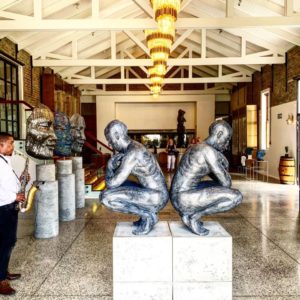 both locally and in the UK, her success in this business leading to her being awarded the Order of the British Empire (OBE), alongside which she is growing her hospitality Benguela Collection, with properties in Hermanus and Sedgefield, as well as in the UK, having a knack for finding the perfect staff to lead the various projects, such as spotting the talent of Chef Jean, and appointing the award-winning winemaker Johann Fourie, formerly of the KWV.