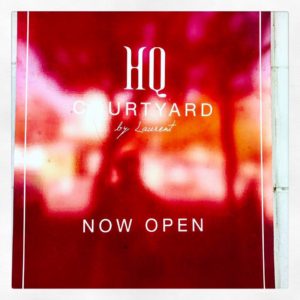 On Thursday a number of writers and I enjoyed lunch at the HQ Courtyard by Laurent, a pop-up which has been opened for the next two months or so, whilst the former Bizerca Bistrot is renovated for a new HQ concept restaurant to be opened in winter. Bistrot Bizerca, owned by Chef Laurent Deslandes and his wife Cyrillia, has closed down and Chef Laurent has been appointed as the new Executive Chef of HQ. 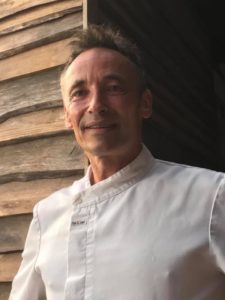 where construction workers were hard at work in renovating the restaurant. Matt explained that the pressure on Chef Laurent’s family was too great, his wife having been involved in the running of the restaurant, and affecting their family life, having two children. Chef Laurent will have Sous Chefs in both the current HQ kitchen, 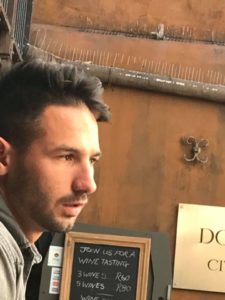 as well as in the new concept restaurant when it opens in winter, and he will oversee the operation of both kitchens. He has set up a pop-up restaurant in the former Bizerca courtyard, called HQ Courtyard by Laurent, which opens to the public tomorrow. It will run as a pop-up until the concept restaurant is ready to open. Next week Chef Laurent will design a new menu for HQ.

Matt said that the appointment of Chef Laurent at HQ will allow him to have fun in the kitchen, while Matt and his staff can 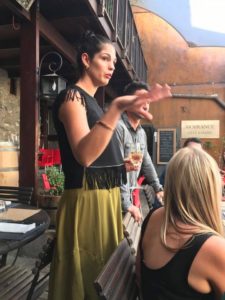 focus on the marketing of the new concept restaurant. Chef Laurent came to our table briefly after the lunch service had been completed, and described his appointment at HQ as a ‘new adventure’. Matt told us that Turkish architect Ali Kimali, with offices in Turkey and Cape Town, and designer of the original HQ and Mondiall, is doing the interior design of the concept restaurant. We were invited to the 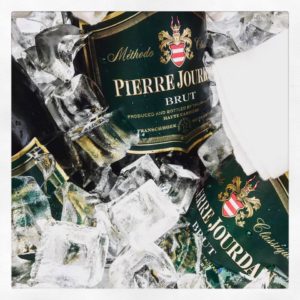 We were looked after by HQ GM Warren Cowdy, and Restaurant Manager Giovanni Sardo. We were offered a glass of Haute Cabriere Pierre Jourdan as a welcome drink. We were seated at a long table, 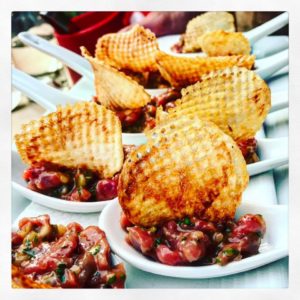 and each setting had a Tasting Menu, which costs R250 per head for four courses, a very reasonable offering, especially as we received an Amuse Bouche of 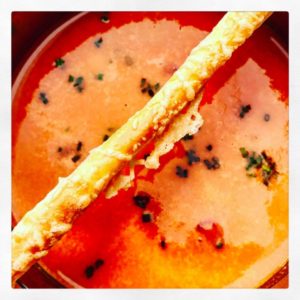 Beef Tartare topped with a potato crisp as well.

The first starter was a chilled tomato gazpacho, served with cubes of watermelon and cucumber, adding colour and texture to the soup, 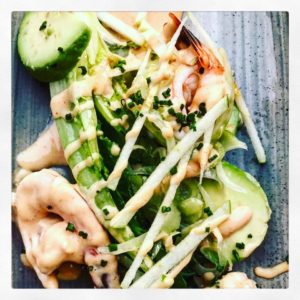 and topped with a pecorino cheese straw.

The second  starter was Bizerca prawn cocktail with avocado, apple, and a raw fennel salad, a generous 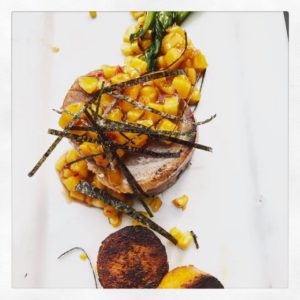 portion, and perfect for the hot summery day. 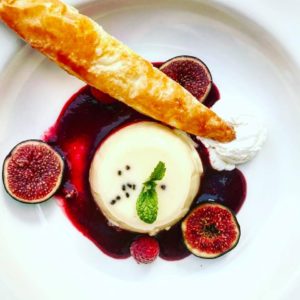 My favourite dish was the colorful dessert, a cardamom and vanilla flan, served with a berry 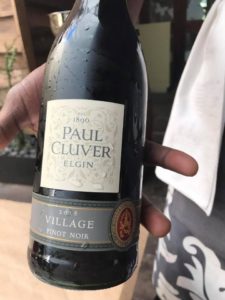 The name of the new concept restaurant was not revealed to us, but should be 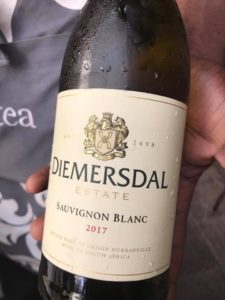 announced next month. The new concept restaurant will seat up to 90 persons inside, and 80 – 100 in the courtyard. It will be interesting to see how the food offering at HQ evolves, having established itself as only serving a salad, steak, and chips up to now.

A blackboard offers an a la carte menu, with a Chef’s Tasting Menu of the four dishes we enjoyed, at R250. Only the seared Tuna was also on the a la carte menu, at R180. Beef tartare, served with pommes, costs R80; leek salad with goats’ cheese, cauliflower, and capers, costs R75; squid and chorizo fricassee with a jalapeño and pineapple salsa costs R82; a delicious-sounding caramelized pork belly salad costs R120; and salad, steak, and chips, the signature HQ dish, is charged at R218.

It is exciting to see Chef Laurent’s first pop-up dishes, and to speculate what the new concept restaurant will offer.