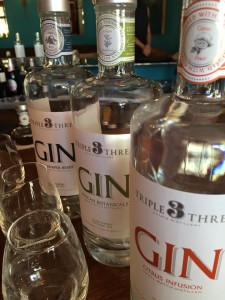 Capitalizing on the international trend to increased gin drinking, with more and more customers requesting gin-based cocktails, and being driven by innovation, the idea to produce Gin was born at Blaauwklippen. It is an Eau de Vie made from Juniper berries and neutral alcohol, which was originally made to enhance the taste of tonic water, a treatment for malaria. The Distillery’s gin was distilled in a column copper distill imported from Germany. The best possible ingredients were sourced for the gins, which cost R300 each:

#   The Juniper berries for the 100% Juniper Berry Gin were imported from Europe, and additional ingredients are fresh essential oil fragrances like menthol, eucalyptus, pine, cloves, and lime, which are gently emphasised by whiffs of white pepper. Notes of vanilla and the floral scent of rose petals reflect the sweet juiciness which juniper naturally carries.

#   Organic lemons were picked from the Blaauwklippen estate, while oranges came from the East Coast for the Citrus Infusion Gin. Opulent scents of orange, lemon, lime and red grapefruit evaporate on the nose while the juniper berries present menthol and eucalyptus aromas adding complexity. Rhubarb and lemon grass whiffs bring a gentle sweetness to the overall taste. 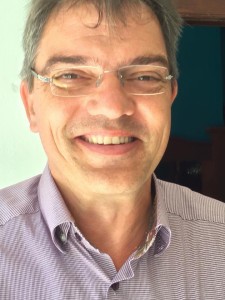 the new Gin range: ‘With the rise of a wider variety of quality, artisanal distilled and brewed products, we felt a need to add to our existing portfolio of world-class hand crafted wines. The Triple Three Gin fills this gap perfectly as a world class drink. Our gin is proudly produced using a state of the art copper column-pot still here on the Estate and we offer three exciting flavours’. He added: ‘There is no doubt that gin is very much on-trend right now. By producing a world class offering, we give our consumers yet another enjoyable experience. Whether they enjoy our Gin with tonic or as a Negroni, straight up or as a cocktail Martini, it will become a true refreshment speaking of the Blaauwklippen innovation spun over more than 333 years!’. 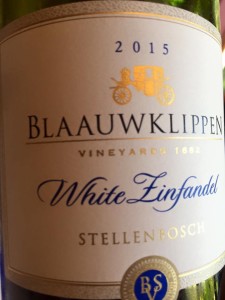 The Blaauwklippen lunch, with its biggest turnout ever, was also an annual celebration of its Zinfandel, a cultivar that is synonymous with Blaauwklippen, and not the easiest to grow. Rolf described it as battling ‘with big Berry, complex-compressed growth, infections, sunburn, and unbalanced ripening‘. Rolf seems to thrive on 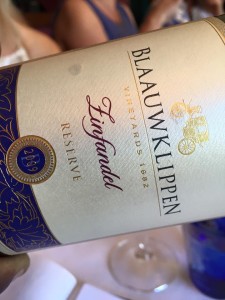 the challenge of Zinfandel, and they have created such products as White Zinfandel, a red Noble Late Harvest, B&A, a Reserve Zinfandel, and a Zinfandel Grappa. Last year they launched their Zinfandel Diva 2013, a sparkling wine which spends 24 months on the lees, which was our welcome drink. 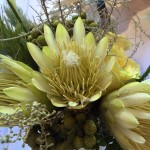 Rolf praised the La Mouette chefs for their excellent interpretation and pairing of dishes with the Blaauwklippen products. Chef Henry Vigar and his wife Mari were traveling overseas, but Head Chef Andre Hill and the kitchen team did a great job in the preparation of our lunch.  The tables we sat at had special flower decorations which included the ingredients of the three gins. 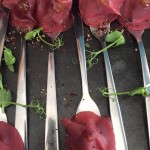 Parmesan aioli, the latter unfortunately in a chipped dish; beautifully 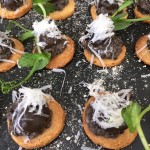 presented beetroot ravioli and goat’s cheese on a spoon; and mushroom and chestnut shortbread.

The bread plate contained a most delicious walnut and seed loaf; a brioche with cheese, chili, and thyme; and pain rustic. It also contained smoked butter as well as a farm-style butter. 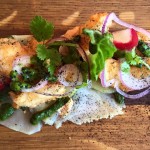 The first starter was salt and pepper prawns, served with chimichurri, 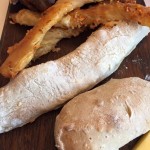 My favorite dish was the Summer Caesar Salad, with Romaine Crème Fraîche, quail egg, crispy pancetta, cured yolk, Worcestershire caviar, and Parmesan, which was paired with the latest (2014) vintage of Blaauwklippen Diva MCC. Rolf said that 4500 – 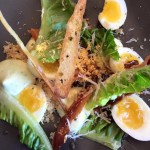 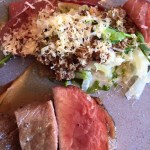 The Gemsbok loin also attracted very favorable mentions at our section of the table, it also (surprisingly) being served as a bolognaise, with onion spaghetti, house-cured bresaola, and rye crumbs, and was paired with the very popular Blaauwklippen Zinfandel Reserve 2009, which is sold out already.

Interesting was our G & T 2016 first dessert, which was a tonic 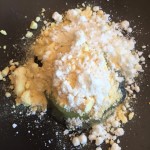 jelly, lemon sorbet, lemon curd, and meringue, served with each of the new Triple Three Gins, the 100% Juniper, the Citrus Infused, and the African Botanical. A bottle of Fitch & Leeds Indian Tonic water was also served, and Rolf said that the international brand now is a partner of their new Triple Three Gin range. 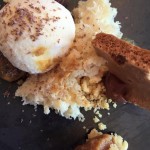 Disclosure: we received a bottle of Diva MCC 2014, four bottles of Fitch & Leeds Indian Tonic, as well as a Triple Three Gin, for which I chose the Citrus Infused variant, with our media pack.