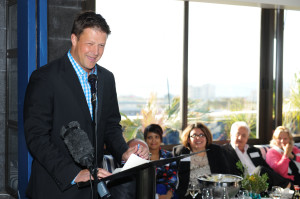 For the first time in the Western Cape a Tourism Ambassador has been appointed.  Bob Skinstad, South African rugby hero and commentator, is the new Tourism Ambassador for the Overstrand, encompassing the municipal region stretching from Kleinmond-Hangklip to Gansbaai, via Hermanus and Stanford.  The area is also known as the Cape Whale Coast.

The concept of a Tourism Ambassador was the idea of Wesgro CEO Nils Flaatten, who felt that Bob’s interaction with top rugby fans locally, as well as internationally would stand the Overstrand region in good stead if it was recommended by him as a holiday destination on his travels.  Bob grew up in ‘Southern Rhodesia‘, but loved coming on holidays to Hermanus with his parents, and they now live in the seaside town (with his parents-in-law too), giving Bob’s endorsement even greater credibility.  A Memorandum of Agreement has been signed for 12 months between Bob and the Overstrand municipality, confirming which services he will render, and how many packages of products from the area he can use for marketing purposes.   He wants the region to become more Social Media savvy, and recommended ‘We Chat’ as a huge free Whats App style communication medium.  He recently spoke at a SA Tourism function about Social Media, providing suggestions.

‘Wesgro has played an intermediary role between the Overberg region and Bob, bringing together the two parties with the objective of leveraging Bob’s celebrity status and large network of social media followers to drive awareness of the region.  It is our intention to learn from this agreement and then replicate it in other areas to benefit tourism‘, Nils said.

Overstrand Mayor Nicolette Botha-Guthrie thanked Bob for assisting them in positioning the Overstrand in the international market. She emphasised the importance of tourism in creating job opportunities in her region, yet 19% 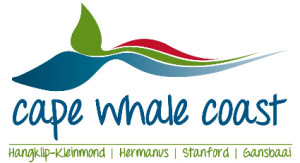 of the population in the area is still unemployed.  The Overstrand encompasses 1700 km² and includes 11 villages.  It offers lasting memories, she said, and has a wealth of attributes, including Blue Flag beaches, the best land-based whale watching in the world, golf, shark diving, horseriding, wines, 9000 Fynbos species, and organises a number of Festivals. Her dream is for the Overstrand to become the World Capital of Arts and Festivals.  She thanked the Hermanus Wine Route wine estates Creation, Bouchard Finlayson, Newton Johnson, Restless River, WhaleHaven, and Domaine des Dieux, whose wines were offered at the launch.

Bob explained that he was offering his services in a volunteer capacity, for a region which he described as ‘one of the biggest assets in South Africa’.  He described it as world class, and said that it is not known by enough locals and visitors.  He will work on the 80/20 principle in focusing on those marketing activities that will create the biggest return.  Bob expressed his love for the Overstrand, and said that he enjoys spending time in the region with his family.

Bob has lost none of his good looks, and impressed with his eloquent talk, despite 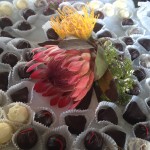 battling with the very strong wind affecting his microphone. Chocolates were served at the function, beautifully presented with Overstrand fynbos!  I enjoyed chatting to Bevan Newton Johnson about their new The Restaurant at Newton Johnson, which is run by Chef Eric Bulpitt with the support of Chef George Jardine, now the best restaurant in Hermanus and the Overstrand.  Speaking to Nils, it could well be that more Tourism Ambassadors will be appointed for other regions in the Western Cape.