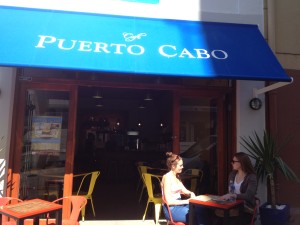 Cape Town is a city of surprises, and a walk yesterday along Loop Street led me past Café Puerto Cabo, its bright blue awning and patrons sitting at a pavement table attracting attention.  I went to have a look, and discovered a small chic Café that thrives on design not only of its interior but also by offering a men’s clothing couture range branded Issa Leo, and also serves quality coffee by Deluxe Coffeeworks in thirteen styles.

The Manager Zacharias Lopez recognised me as a regular customer of Haas, as he had worked there for about three months as their barista. His brother Issa is the owner of the business, having come to Cape Town from Spain in 2009, and having slowly built up his Issa Leo 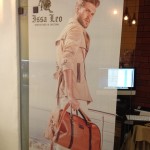 clothing brand, made in Cape Town, over time.  He started at the Biscuit Mill, selling the clothing as well as leather bags there.  A business partner has enabled him to open his clothing and leather bag store within Café Puerto Cabo, the name meaning Port of the Cape.

Using the services of interior designer Zaayan Rasdien, they focused on the colours of the Spanish flag, the wooden table tops being set in yellow or red metal frames. The tables were especially designed for the Café, Issa finding little to please him in Cape Town. Chairs are metal in yellow, black and red.  On the table there is a little cactus, and the sugar is in a black ceramic holder 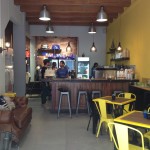 made to look like a squashed disposable coffee cup!  The chic coffee cups are by Le Creuset, as they were the only matt black ones that they could find to match their colour scheme.  I loved the glass olive oil holders, which allows one to pour two olive oil options: plain or 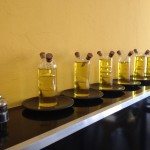 with garlic.  Mini black pepper grinders are offered on request.  The coffee bar counter top was made from railway sleepers, as was the shelving for the leather bags.  There is a tan leather couch if one would like more homely seating. Modern Spanish music adds a good vibe.  One wall is painted in a strong yellow, and has a postage stamp and seal, to reflect their link to travel, and their food which is Spanish and Mexican.  The logo is an anchor, representing the port theme, and is printed on the take-away coffee cups and paper bags for food take-aways.

In addition to more standard coffee styles, they serve a Bombon, described as being one quarter condensed milk with a shot of espresso, and a Ristretto, a short shot of espresso.  The cappuccino costs R15, but they are charging R12 during their first month of operation, until 21 October, to celebrate their opening on Saturday.  There are a number of milkshake options at R28, including an avocado muesli one at R32!  Natural fresh waters cost R18 – R20, and fruit juices are offered too.  They offer small light bites to eat: Spanish ‘Tostadas’, or pancakes, ranging from R18 for tomato to R34 for Roquefort. They are also available in cheese, with Nutella, and with jam.   Croissants cost R13, and they have some interesting fillings, such as 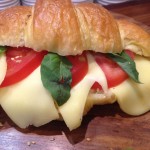 Mozzarella, basil and tomato (which I took home as a take-away,  costing R28), Honey and Feta, and Nutella and Banana (R30).  Soft boiled eggs and toast cost R45, and Muesli with fruit salad and honey costs R50.  Sandwiches sound exciting and have a play on words, including ‘Italian Job‘ (Caprese style, at R35), ‘Tapa Tuna’  (R38), ‘Pollo Roquefort‘  (R45), and the more descriptive English Beef (R45), and Fresh Salmon (R55).  Lin Sampson popped in by chance, being on an interesting writing assignment in the area, and she discovered a ‘Lost in Translation’ Spanglish moment when the menu promised ‘marmalade’ but meant jam!   She was adamant that the ‘butter‘ served with her croissant was in fact margarine.  Zacharias was professional in accepting her feedback, and they are not likely to make that mistake again! 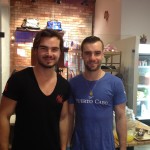 The Spanish brothers Issa and Zacharias Lopez are charming, and are hands-on in their business.  One can see Café Puerto Cabo becoming a trendy Cape Town hotspot, a more classy Spanish alternative to La Parada not far away on Bree Street, even though their food options are still limited.  The Café is in a trendy block which includes art gallery Ebony, and the exciting new design store Stable.

Disclosure:  Zacharias would not let me pay for the cappuccino.

POSTSCRIPT 28/9: I popped in for a cup of coffee this morning, parking 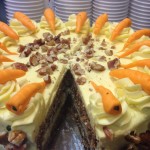 being easier on weekends.  This was a yummy carrot cake they served today.