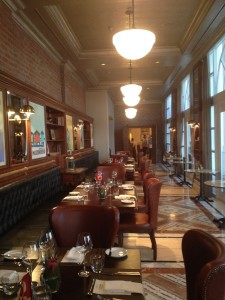 When the Cape Town branch of the Chaîne des Rôtisseurs, an international association of gastronomy, organised its first function of the year at the Table Bay hotel, I booked, on the off-chance that it could be held at Camissa Brasserie, which opened two months ago. It was a convivial evening with good company, but disappointed on its promise of Cape heritage food.

The Chaîne members are serious food-lovers, and include restaurant owners, chefs, wine estate owners, and gourmands.  The Cape Town branch of the Chaîne has about 70 members, its Bailli of the Bailliage du Cap Samm Bain told me, and 35 members and guests attended the dinner, including Chaîne members from Saudi Arabia and Sweden.  On arrival we were served The Table Bay Captain Table Brut, which Gershwin told me is made for the hotel by Graham Beck.  Canapés 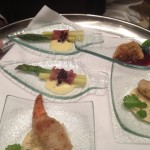 During the drinks I had a look at the 45-seater New York style Brasserie interior, which had been booked out for the Chaîne dinner, and Gershwin told me that the space previously was The Conservatory Restaurant and Terrace and Palm Court, which was an overflow venue for their breakfasts and when the Atlantic Grill restaurant was full, with a view onto the V & A Waterfront and Table Mountain.  It received a make-over by designer Carolyn Davies, with a new grey ceiling with a pressed steel effect, bookshelves along the walls, and an impressive chandelier made from crystal whisky decanters in the main and slightly separate Captain’s Room at the end of the rectangular restaurant space.  The length of the wall has black leather banquettes.  Above these are brass railings.  A wine room has been created too, for wine storage as well as tastings. A lounge area has been created outside the bar and restaurant, for guests to enjoy cocktails and high tea. The entrance to the restaurant is most impressive, with a 500 year old door which 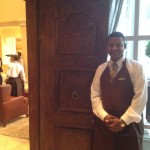 comes from an island in Thailand, Gershwin shared.  Pictures on the walls are Cape Town inspired, and represent Blouberg, Muizenberg, Kirstenbosch, and Oscar the seal amongst others, presented in an Art Deco style, with overhead lighting to match.  The tables are made of cast iron, and had a cheap woven plastic place mat, a mix of Hepp Exclusiv and Pintinox cutlery, proteas in a vase, and a material serviette.

The restaurant is named after an old Khoi name for Cape Town and means ‘The Place of Sweet Waters’, creating a link to Cape Town’s past and heritage.  The media release issued prior to the opening of the restaurant described the restaurant as having ‘appeal to the social crowd’.

Our table had great fun, having the jovial The Cullinan Executive Chef Lindsay Venn at our table, as well as Lynn Angel 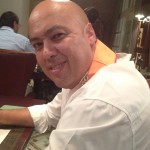 , who does private catering under the Kitchen Angel name, and was the first chef at the Table Bay hotel when it opened.  Chef Lindsay has been at The Cullinan for two years, and says that he loves playing with food. We spoke a lot about MasterChef SA, and everyone at the table had an opinion.  Chef Lindsay knows Reuben Riffel, the new MasterChef SA judge, and I questioned the wisdom of M-Net to have chosen him, as he barely is in any of his four Reuben’s and Racine kitchens, being so busy with commercials, book writing, TV appearances, and celebrity event catering (including the disastrous Braai for the World Design Capital 2014 Gala Dinner last Friday).  Chef Lindsay chatted with Riffel at the MasterChef SA Season 3 auditions held at the Cullinan last weekend, a disappointing low number of 73 hopeful amateur chefs presenting their cold audition dishes. He told me a number of times that Riffel is still a chef at heart, and that he misses getting his hands dirty in his kitchens, but that he lacks time to spend more than a few minutes in any one of his kitchens.   His staff would prefer it if they can get on with the job, is the feedback from the One&Only Cape Town hotel. Chef Lindsay likened Riffel’s dilemma to that of Jamie Oliver and Gordon Ramsay.  We joked that Riffel will land up establishing his Reuben Riffel Chefs Training Academy when he has had enough, having started his first Reuben’s in Franschhoek ten years ago! We discussed the Eat Out Awards, and that hotel chefs would like to see a separate category evaluating hotel restaurants, and Eat Out editor Abigail Donnelly has been approached in this regard. 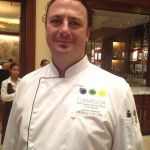 Senior Sous Chef for the whole hotel kitchen, including Camissa, is Jason Franco, who previously worked at Blues in Camps Bay, the Vaudeville Supper Club, and in Kuala Lumpur. In the media release which preceded the transformation into Camissa, it states that the menu would offer ‘local cuisine in the most sophisticated fashion, providing an enchanting departure from the ordinary’.  We did not see the menu living up to this promise. The menu covers contain a greeting from Table Bay Hotel Executive Chef Jocelyn Myers-Adams, currently on maternity leave, welcoming guests, and explaining the restaurant’s food style of ‘simple, wholesome, understandable Cape Heritage food’, and its policy of ingredient usage, ‘locally sourced from farms that we have an intense working relationship with’!

Our lovely waitress Samantha brought a bread board, which consisted mainly of tomato focaccia, with herb butter, balsamic vinegar, and olive oil. The set menu consisted simply of a meat and fish starter and a meat and fish main course, with one dessert. For my starter I chose a Beef short rib, which had been braised in Oscar ‘larger’ (sic), a draught beer especially made for the hotel 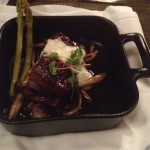 by Jack Black, and named after Oscar the seal (R80). It was served with pickled asparagus, shitake mushrooms, parsnip puree, and a lager jus, the plating being uninspired.  Lynn allowed me to photograph 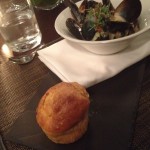 her Saldanha  mussels (R80), which were tiny she said, and had been prepared in a white wine and garlic sauce, and served with vegetables, a chive crème cream sauce, with Chakalaka bread. Other starter options on the Camissa menu are peri-peri smoked free-range chicken livers (R60), and Karan beef fillet Carpaccio (R95).  A choice of three salads ranges from R75 for a Pegasus Riesling poached baby beetroot and turnip salad to R95 for a Rooibos tea smoked Franschhoek trout salad.

For the main course most of us had lamb shank, which was a hearty serving, and was served with mash, carrot puree, broccoli, 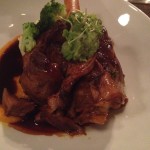 and minted peas.  It came off the bone easily. We were told that the dish came from The Atlantic Grill menu, and is not on the Camissa menu.  Lynn had kept her choice fishy, and ordered the Malay curried Lobster 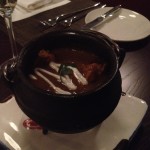 Pot, which she felt was a misnomer, as it was crayfish that was served, with pilaf rice and sambals (R220).  A Vegetarian dish of the day is offered at R120, and other main courses range in price from R130 – R170, and include seared kabeljou, peri-peri free range baby chicken, Parma ham wrapped pork tender loin, Karan beef fillet, mint and herb roasted rack of lamb, and Pinotage marinated venison loin.

For dessert we were served a Blueberry cheese cake on a slate plate, with a tuile and chocolate pin (R70), too many raisins detected at the bottom of the crust and too few blueberries, our table of experts felt. Other Dessert options cost 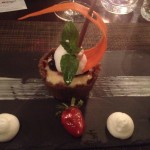 R65, and include a lemon meringue pie, mosbolletjie bread pudding, fresh summer berries in an MCC sabayon, a flourless chocolate torte, and a local cheese platter (R80). The meal ended off with a choice of infused tea and coffee.  We paid R400 for the three course meal and drinks.

We were offered a choice of Camissa house wine, the White 2013 being a Sauvignon Blanc/Chenin Blanc blend (R40/R160), and the Red 2012 being a blend of Cabernet Sauvignon and Merlot (R45/R180), made by Rikus Neethling Wines.  Here Samantha’s knowledge was lacking, not knowing the exact prices, and reading the blend information off the label.  The Camissa winelist documents the region and vintage of each wine, and offers a description of the wines. Champagnes offered are Taittinger Brut NV (R600 per bottle, R150 per glass) and Brut Rosé NV (R750/R190), Billecart-Salmon Brut Rosé NV (R1295), and Bollinger Brut N/V (R1450). MCCs offered are Villiera Starlight Brut NV at R240 per bottle and R65,79 (!) per glass, while Graham Beck Brut costs R260/R65, and its Brut Rosé ‘N/V 2009’ (sic) costs R320/R65.   More Chardonnay options are offered than for any other varietal.  Only one Shiraz is available, the Anthonij Rupert Protea Shiraz 2012, at R180/R45.

One would expect that a restaurant chosen for a Chaîne dinner would pull out all the stops, to impress the attendees, and to prepare a menu that is out of the ordinary relative to its standard fare, to impress such a group.  We were disappointed in this respect.  Our waitress stretched across us to place the dessert spoon on the right, from the left, but she was very helpful in organising a copy of the A4 Camissa Brasserie Menu and A5 Dessert Menu, with interesting colour spots on them.  The Camissa pay-off line ‘Quintessentially South African at the Table Bay’  is not reflected in the Camissa menu, few of the dishes reflecting South African cuisine.  The interior decor has no link to the Cape heritage which the menu is meant to reflect.  The errors on the winelist, including grammatical ones, as well as the typing errors on our set menu, are unforgivable for a five star hotel.

2 replies on “Camissa Brasserie at Table Bay Hotel: chic interior, does not live up to ‘Cape heritage food’ promise!”