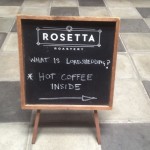 The Sweet Service Award goes to the Camps Bay Promenade, the Palms Centre, and Rosetta in The Woodstock Exchange, for their proactiveness in countering the Stage 2 loadshedding for Woodstock, the city centre, Tamboerskloof, and Atlantic Seaboard last Saturday.  The Promenade in Camps Bay has just installed its generator (the four Kove Collection restaurants in the building had already installed their own generators), while the Palms Centre also has a generator. Rosetta in The Woodstock Exchange was organised, having pre-brewed its coffee, but was not available with foam! All other coffee shops and eateries in Woodstock, The Fringe, Tamboerskloof, and Camps Bay could not offer coffee nor breakfast between 10h00 and 12h00.  It is a surprise that a centre such as The Woodstock Exchange does not yet have a generator, given the severity and regularity of the loadshedding! 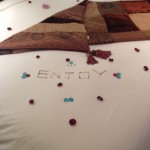 The Sour Service Award goes to Tonquani Lodge in Knysna, and its General Manager Maurita Borcherds-Hendricks. In April I was booked by the Department of Justice into this ‘5-star’ Country Lodge in the forest outside Knysna, with no mobile phone reception, which I was dependent on to continue running my businesses, and to remain in touch with my staff. Despite being ‘5-star‘ and having a ‘Dining Room’, they do not serve dinners! The accommodation is predominately in chalets, but I was first shown an odd double-storey suite, that had a bedroom upstairs and a bathroom downstairs, not meeting the Tourism Grading Council requirement of en-suite bedrooms. I was offered the room next door, and that was more acceptable, other than that the desk I needed to work at was in the bathroom!  I had to laugh at the welcome word ‘Enjoy‘ on the bed, built from matchsticks, and the bed strewn with plastic ‘gems’.  No welcome drink is offered, and no complimentary water was available in the room.  The room did not have cups and saucers for tea and coffee, only mugs!  The manager had an arrogant sing-song way of speaking, and left the property at 17h00, with only the porter on duty. Winter had started making itself felt, and I remembered the manager mentioning electric blankets. Unfortunately the (cheap Clicks ) Safeway blankets did not work, as neither of the two remotes were plugged in, and the wooden bed was too heavy for me to move it to plug in the remotes. I finally found a blanket in the bathroom, in a big plastic bag, but this had not been pointed out to me on arrival.  The room was in front of the kitchen, which meant that I was woken by its noise at 6h00, in addition to its noisy geyser, which was in the ceiling above the room!  Dead bugs were on the window sill in the shower.  The kitchen was not ready for the 8h00 breakfast start, and had forgotten to make the fruit salad.  When I told the manager about the electric blankets, she said that I should have called the porter, not understanding that I would have had to get dressed to get him to my room! An apology was not forthcoming!  One plus was that the wifi did work in the room. I did not hear from owner Brandon Robson-Parsons, which the GM should have made happen. Having to return to Knysna a month later for the same court case, I was delighted to hear that the Department of Justice and its tour operator Travel with Flair had changed its accommodation supplier (unfortunately to Fawlty Towers Protea Hotels Knysna Quays), due to a dispute with the Lodge, having originally been the only Department of Justice-approved accommodation supplier in Knysna!