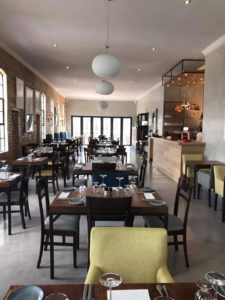 Reuben’s Franschhoek, and The Big Dog belonging to Terbedore Coffee Roasters, opened in Franschhoek in May. Both restaurants appear to be very popular amongst locals. A further new Franschhoek restaurant is rumored to be opening. The Promenade in Camps Bay is undergoing major changes, with Blues and Mezepoli appearing to have closed down, the former having operated in Camps Bay for 30 years, and having put Camps Bay on the tourist map. The Hard Rock Café is said to be opening in the Blues space, and Zenzero is undergoing a renovation.

#   Reuben’s Franschhoek has re-opened just off the main road, after a twelve month closure for renovations. (Photograph)

# The Granary Café has opened in The Silo Hotel in the V&A Waterfront.

#. The Silo Rooftop is a new rooftop bar and light meal eatery in The Silo Hotel.

# Primal Eatery #meatery has opened where Charcoal was located previously, with owner Brynn Felix and Chef Phil de Villiers, focusing on open-fire cooking of all dishes.

# The Hard Rock Café is said to open in The Promenade in Camps Bay, where Blues operated previously.

#. Dunkin’ Donuts will open 250 outlets in our country, the first outlet having opened at N1 City in Cape Town.

# Papa San, previously of Takumi, has opened his own restaurant Obi with Ben Bettendorf, on Long Street.

# Baconville has opened in Willowbridge, a second (franchised) restaurant by Richard Bosman.

# Black & Co has opened in Constantia as a coffee and gift shop.

# Chefs has opened in Gardens, with Chef Jenny Ward in the kitchen.

# Stepbrothers Deli, Locanda, and Bar has opened in De Waterkant.

# Chef Bertus Basson has opened The Deck at Hidden Valley.

# The owners of Jarryds have opened The Chicken Shop in Sea Point.

# Woolworths has opened a health restaurant NowNow on Longmarket Street.

# Harrington’s Cocktail Lounge has opened where Assembly used to be, with Sheldon Raju as Consulting Chef.

#  A truly Italian restaurant has opened in Parklands, called Ital Emporio & The Green Life, a joint co-operation between Davide Ostuni of Puglia Cheese and The Green Life.

#  Col’Cacchio is to open in the V & A Waterfront.

#   Terbodore has opened The Big Dog restaurant and coffee shop in Franschhoek.

#  Chef Margot Janse is rumored to be opening a restaurant on Môreson wine estate outside Franschhoek, with Susan Huxter.

#  J Something of Mi Casa is to open a restaurant in Cape Town, in addition to a Pretoria restaurant he  opened in March.

#   The Rib Shack is to open in Sea Point later this month.

#  Lou Lou’s Bar is opening in the Cape Quarter.

#   The Crazy Horse Gastropub is opening on Bree Street.

#   Melissa’s is opening in Hermanus in November.

#   Hussar Grill is opening in the Protea Hotel in Franschhoek.

# Baked at Bistro on Long Street and at Regent Road in Sea Point have closed down.

#   Blues restaurant has closed down in Camps Bay, after 30 years of operating.

#   Mezepoli has closed down in Camps Bay.

#  Raya Kitchen, belonging to Kitima, has closed down on Wale Street.

#   Rivendell Restaurant near Kleinmond and Bot River has closed down.

#   Ragafellows in Hout Bay has closed down.

#   Grill under the Milkwood has closed down.

# The Fat Butcher has opened in Stellenbosch.

# The Mess has opened in The Rockwell, previously Café Dijon

# Seabreeze Fish & Shell has opened, where Palma used to operate on Bree Street.

# Bootlegger has opened in Bakoven where Baked Bistro used to operate.

# SCHOON (de Companje) has handed over the running of its restaurant and business to Boschendal until the end of July. SCHOON will re-open elsewhere at an as yet unknown venue and at an unknown date. Boschendal will close the Church Street eatery from August onwards, renovate, and reopen with a new brand.

# Richard’s Supper Stage has relocated from Sea Point to The Rockwell Dinner Theatre in Green Point. The downstairs Bistro has closed down.

# Cassis has moved its shop in the Garden Centre into a central open space.

# HQ has taken over the Bistrot Bizerca space, to become an international concept restaurant.

#   The Classic Car Bar pop-up restaurant in the V&A Waterfront has closed down, with a new Kove Collection restaurant said to be opening in the space.

#   Zenzero in Camps Bay is undergoing a major renovation.

#   The third floor cosmopolitan restaurant at Villa 47 is said to be changing into an Italian restaurant, and to have appointed a Michelin star chef, in September.

#   The Italian owners of La Sosta in Swellendam have sold the restaurant. It will be operated under the same name by the new owner.

#   Aromatish Café and Bakery has opened where Yvette’s used to be in Hermanus.

#   Harbour Rock restaurant has taken over the operation of the Spookfontein restaurant in the Hemel & Aarde Valley.

#   Paradiso in Hermanus has new owners.

# Carl Habel is now the Manager of Nobu at the One & Only Cape Town.

# Chef Jochen Heathcote is now the Head Chef at The Restaurant at Villa 47, formerly at Myoga and Open Door.

# Chef Sheldon Raju is no longer with Chefs Warehouse nor is he involved with Chef Liam’s new Indian restaurant Thali.

# Chef Guy Bennett of Delaire Graff has moved to Bertus Basson at The Ritz.

# Chef Conrad van den Heever is heading up the kitchen at the new Seabreeze Fish & Shell.

#  Chef John Norris Rogers has been appointed as Head Chef of La Petite Colombe in Franschhoek, opening in August.

#   Chef Brad Ball has left Peddlars on the Bend, and is now a Consultant Chef By Brad Ball.

#   Chef Wessels van Vuuren has taken over the management of Café Blu in Hermanus.

#   Mon Desir in Hermanus will be run by new management from August onwards, serving Breakfast, Lunch, and Dinner Mondays to Sundays.

#.The Kitchen at Maison: closed until 4 July

# Camphors at Vergelegen: Closed until 14 June

#   Source in Hermanus is not doing dinners until August.