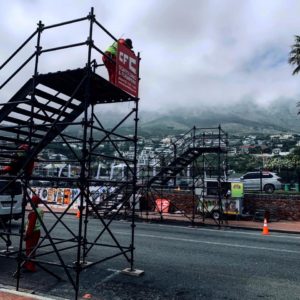 For days already leading Cape Town roads have seen yellow signs erected, warning Capetonians and its visitors of the times at which the roads will be closed on Sunday, the M3 to the Southern Suburbs, Chapman’s Peak Drive, Victoria Road in Camps Bay and Clifton, Beach Road in Sea Point, and the area around the Cape Town Stadium being closed for most of the day. The first cyclists depart from the city centre at 5h00.

The first Cycle Tour, then sponsored by The Argus newspaper, was staged as a protest ride by Louis de Waal, Bill Mylrea, and John Stegmann, to encourage the City of Cape Town to include bicycles in its urban planning for the city. It took some years for their protest to lead to bicycle lanes in the city centre and in Woodstock, but created an event that is the New Year’s resolution for many South Africans whether fit or not. A fair amount of keen international cyclists participate in the 100 km plus cycle race each year, a major boost to the local Cape Town and Western Cape economy, in stimulating the accommodation and restaurant industries in particular. Major race partners are Pick ‘n Pay, Rotary, and the Pedal Power Association.

The first cycle race had 500 entrants, which has grown to, and has had to be capped at, 35000 participants. The route commences for the first time at the Castle near Woodstock, continues on Nelson Mandela Boulevard, over Hospital Bend, along the M3, up Wynberg Hill, to Simonstown, through Scarborough, the scenic Chapman’s Peak, the infamous Suikerbossie Hill outside Hout Bay towards Camps Bay, past Clifton, Bantry Bay, and Sea Point, and is concluded at the Cape Town Stadium.

We wish all Cape Town Cycle Tour participants and related visitors to Cape Town a successful and good ride and enjoyable time in our beautiful city on Sunday. On Sunday friends and I will be cheering on the cyclists, from my terrace with a view on Victoria Road in Camps Bay.