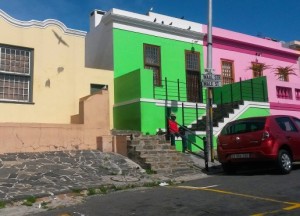 Earlier this evening German TV channel 3sat broadcast a flattering 45-minute documentary on Cape Town, entitled ‘Reisen in Ferne Welten: Kapstadt’ (Travel in far worlds: Cape Town). Cape Town is one of a number of destinations covered by the TV channel, including Canada and the Great Barrier Reef.

The focus of the documentary was to evaluate how our country has changed and developed in the past 21 years since the end of ‘apartheid’. German tourists like to travel to our country in the European winter, it was said.

The documentary describes the Cape as the ‘Cote Azure of Africa’, and as a ‘piece of Europe at the other end of the world’, Cape Town being the ‘whitest city of South Africa‘, despite having different population groups (unfortunately labeled in terms of skin colour in the background information)!

However, the ‘White‘ population is the smallest in Cape Town, the information states, all the ‘Black‘ and ‘Coloured‘ residents of the city incorrectly described as living in ‘township ghettos’ on the edge of the city. Homes are described as ‘tin huts‘, without running water, generalizing this for all persons of colour! Despite the hardship of poverty, crime, and high unemployment, the inhabitants have an ‘active social life‘.  This includes meeting at church services, at the hairdresser, and at the culture centre in Langa.

The City is described as having many different ‘faces’. No two suburbs are similar, says the documentary:

#.  Woodstock is described as the meeting point of hip Capetonians, the suburb once having been the centre of car repair workshops and drug dealing. Its ‘rough charm remains‘, and the Neighbourgoods Market at the Biscuit Mill is shown, described as the area’s ‘Fressmeile’ (eating mile), the size of it rather exaggerated. Not one word is mentioned about The Test Kitchen, but instead ‘the hippy style’ The Kitchen of owner Karen Dudley is introduced to viewers. She laughs when she shares that she has ‘Whites‘ working for her now, which would have been unthinkable 21 years ago, as would having her own business in a previously ‘White‘ area. Her most exciting achievement to date was having Michelle Obama for lunch. ‘It is the best gift she gave us‘, she enthused.

#   District Six was the previous mixed race residential area in the city, and all its buildings, except churches and mosques, were razed when apartheid was introduced. The District Six Museum on Buitenkant Street was introduced. The manager said that the area has never been replaced as ‘an area for people of all colors to live together‘. ‘Invisible walls still divide communities’, she said.

#.  Across the road is Truth, with its old industrial design. Owner David Donde in his distinctive hat and outfit was interviewed. Truth was described as the ‘hipster central of Cape Town’, and is featured in many gastronomy-guides.

#   Rapper Jack Parow makes a brief appearance, and states outright that the corruption in our country is bad. He also states that while ‘Whites’ were previously advantaged in getting jobs, it has changed in that persons unable to do the work are given jobs.

#.  Bo-Kaap is the area of the much-photographed semi-detached houses of relatives of Moslem slaves from Malaysia and Indonesia, claimed to attract the most tourists in Cape Town (not accurate as the Waterfront and Table Mountain Cableway attract far more visitors).  One can take cooking lessons with Fadiela Williams in her house. Indian food is strongly spiced, while Cape Malay dishes contain lots of spices but the emphasis is to make the dishes taste good. The colorful houses in the area reflect the creation of the Rainbow Nation from 1994. Fadiela said she would not sell her house for the €400000 offered, it being her home, her heritage, and her culture.

#   ‘Waterkant‘ (sic) was described as the area inhabited by rich South Africans and foreigners, but their predominant same-gender partner preference is not mentioned!

#   False Bay is introduced via Kalk Bay, with its seals; Muizenberg, being a surfers’ paradise which is controlled via shark spotters sitting high up on the mountain; penguins at Boulders Beach, which battle against whales, seals, and sharks as well as leopards to become a meal! Cape Point is surprisingly not mentioned.

#  Kirstenbosch is oddly criticized for its ‘expensive’ €4 entrance fee.

#   Going up Table Mountain is recommended.

#.  Camps Bay still is the home of the ‘rich White Cape Town‘. Exaggerated house prices of up to ‘€30 million’ are quoted for the suburb. Weird is an interview on Camps Bay Beach with resident and New Media Publishing Copy editor Aviva Singer, reflecting her safety angst to the interviewer. She painted a very negative picture of the noble suburb, especially when she criticized in a ‘Penny Swallow’ moment the ‘masses’ of people of colour taking over the Festive Season of what she clearly believes to be ‘her‘ beach!

#   Township houses have no running water, and Langa residents fear walking to their homes at night, something they did not do before.

#.  Winelands around Cape Town still have predominantly white wine makers. However, there is an increasing number of ‘Black winemakers‘, and this includes Ntsiki Biyela of Stellakaya, the first female winemaker of colour. She studied winemaking via a bursary, never having tasted wine before. She still feels excluded from the wine industry, she said.

#   Hermanus is known as offering the best land-based whale watching in the world, Southern Right whales coming close to the coastline. Eric Davalala is the Whale Crier, blowing his kelp horn when he spots a whale.

#   Grootbos offers Flower Safaris, and its Nature Lodge has a tree nursery, a piggery, and chicken farm. Owner Michael Lutzeyer says they must ‘give something back to nature‘.

#  The West Coast National Park is known for its wild flowers, ostriches, and weaver bird nests.

#   Paternoster is a fishing village which has changed, said fishermen, their traditional homes making way for holiday houses for ‘Whites’ from Cape Town, even though this benefits tourism.

Tourists are attracted to Cape Town for its nature, including high mountains, white beaches, penguins, whales, and other wildlife.

Despite the occasional racial references throughout the documentary, and reference to corruption, the representation of our beautiful Cape Town and surrounding tourist attractions more than made up for this, hopefully attracting interest in visiting our country and Cape Town. The documentary ends in suggesting that all tourism to our city and county will help make it a better society!  As the film was made last year, unfortunately no mention is made of the favorable exchange rate for tourists!