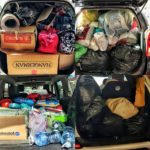 The Sweet Service Award goes to the people of Cape Town, who came to the party in donating clothing, food, beverages, and bedding for the residents of Imizamo Yethu, who were left destitute after a devastating fire this past weekend. Donations were dropped off at the fire stations in Sea Point and Hout Bay, at Pick ‘n Pay outlets, at La Parada Constantia Nek, and at schools in Hout Bay. A collection drive on Ryan O ‘Connor’s Breakfast Show on Kfm on Monday raised in excess of R1 million alone. All non- perishable foods and beverages left unused due to the cancellation of the Cape Town Cycle Tour went to the township residents too. Uber transported all donations to the Sea Point fire station to Hout Bay at no charge. The Cape Town Cycle Tour prize monies of R220000 will be donated to fund the relief efforts after the Hout Bay fires.

The Sour Service Award goes to Multichoice, which service has gone from bad to worse! I needed to fix a viewing problem, and called the Call Centre. I was put through a rigorous process of things to do to address the problem by Magdalene, including removing the LBH cable, the power cable, and removing and reinserting the Smartcard. I found it difficult to reinsert the LBH cable, not understanding why I was having to be a technician ! I called again, and went through a similar procedure. When I asked for a supervisor, I had to wait for ages for the call centre assistant to tell the  supervisor what I had said to her so far, instead of speaking to me directly. He oozed arrogance! I was then told to bring in my decoder and remote (to N1 City) , to have them checked out. I then called an installer company to sort it out for me. I was told that I am being charged for a separate M-Net decoder which I have not had for 16 months! It has been impossible to get a number for the Billing department – they no longer put one through to them, and I was given a number to call in Johannesburg! The number, given to me twice (011) 577-5949), goes through to a fax machine! Koos Bekker, how could you allow Multichoice to deteriorate to this level of patheticness? Netflix should teach you how to do it!