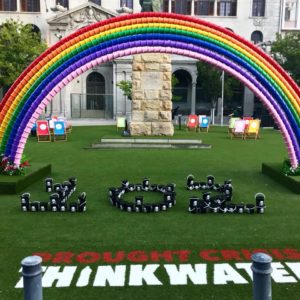 Yesterday I attended the launch of a water saving awareness campaign initiated in the heart of Cape Town by Urban Lime, on Church Square. Mayor Patricia de Lille announced that the City of Cape Town’s recent forecast of an extension of the water supply ‘Day Zero’ by two months, to 13 May, has been amended to 3 May 2018, given an increase in water consumption during the recent rain.

Mayor de Lille officially launched the ‘Urban Park’, which has been created on Church Square, opposite the Groote Kerk. A 500 square meter round artificial grass carpet, with a Rainbow as well as the Everyday Life (by Pedro Pires) art installations, is designed to request residents and businesses to share water-saving ideas and initiatives. The Rainbow artwork in the Urban Park is the most prominent, and artist James Milborrow created it with 550 one-litre plastic beach buckets, symbolic of 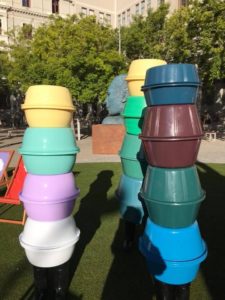 households locally collecting shower water in buckets and reusing it to flush toilets and in their gardens. The Rainbow is about 4 meters in height. The black buckets beneath the rainbow represent the amount of over-use of water relative to the City’s target. The Urban Park public space provides a stage for art and performance.

Urban Lime is a property development company operating in London, Cape Town, and Durban. In Cape Town the company 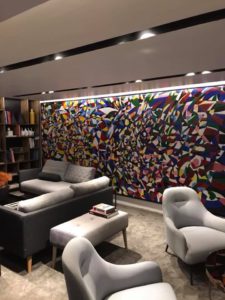 is well-known for its regeneration of the top-end of Bree Street. Currently it is redeveloping the Victorian building Speaker’s Corner, an office, retail, and restaurant space on 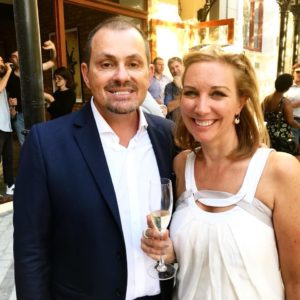 the corner of Church and Parliament Streets (photograph right of the Lounge for use by tenants). Jonny and Katie Friedman own Urban Lime (left).

At the event Mayor de Lille praised those saving water, but mentioned that it is impacting on the City’s income. However, the City of Cape Town will not increase the price of water for now.

Day Zero: when is it, what is it, and how can we avoid it?

In October I said that if consumption is not reduced to 500 million litres of collective usage per day – or put plainly: every Capetonian uses no more than 87 litres each per day – we were looking at about March 2018 when supply of municipal water would not be available.

I am pleased to announce that due to the efforts of the City of Cape Town and the residents of Cape Town, Day Zero has moved to 13 May 2018. Many Capetonians have heeded the call to reduce their consumption dramatically and we thank you.

The City is also doing its bit. As we bring additional supply online from February onwards with more new water coming online in the months thereafter, Day Zero will be pushed further.

We have already brought additional water from the Molteno Reservoir in Oranjezicht and the Atlantis Aquifer, with two million and five million litres per day from these sources respectively.

At this stage, there are seven projects already under way in the first phase. These are Monwabisi, Strandfontein, the V&A Waterfront, and Cape Town Harbour desalination plants; the Atlantis and Cape Flats Aquifer projects; and the Zandvliet water recycling project that will be producing an additional 144 million litres per day between February and July, with the yield from these projects rising incrementally in the months thereafter. In addition, we have 12 projects in the advanced stage of planning that are ready to proceed if required.

But this can only work if everyone plays their part: residents and the City.

As part of my commitment to communicate more frequently on the City’s plans and preparedness, today I want to bring you into my confidence and tell you precisely what will happen if we reach Day Zero.

To keep essential services and vital industry running, we have calculated that at 13,5% dam storage the City will turn off almost all taps. This is Day Zero.

On Day Zero:
• Residents will have to collect a predefined quantity of drinking water per person per day from approximately 200 collection sites across the city. The quantity will be based on the minimum requirements for people to maintain health and hygiene. At the moment, the plan is that we will distribute 25 litres per person per day which is in line with the World Health Organisation recommendation
• We are working on an estimation of up to 20 000 people per site per day
• Based on demand, we are considering extended or 24-hour operations at these sites
• The City’s Water and Sanitation Department especially will be considering the impact on sanitation services. An extensive public health communication campaign will be mounted in advance to ensure that all sanitation systems continue to function and limit the risk of disease
• The City’s Water and Sanitation Department, City law enforcement teams, and the Disaster Risk Management Section are conducting preparedness exercises to be ready should Day Zero come
• The City is consulting with the South African Police Service and the National Defence Force to ensure the safety of residents at these sites and maintain general law and order. Today teams are testing how a real water collection point will work. This is one of many preparedness exercises that the City is undertaking

Day Zero can be avoided. Capetonians have done amazing work to save water. Most residents are saving water but we need every single person to use the prescribed 87 litres per person per day. If we don’t have everyone restricting their water consumption, we will reach Day Zero in May.

The City is doing everything it can, we are working around the clock and pursuing all possibilities, and we are getting advice from experts to deliver on our plan to produce additional water from multiple sources between February and July next year.

This plan to avoid Day Zero will only work if we all stay on track, if residents keep saving, and if we do everything in our might to keep the augmentation plan on track and moving.

I will do my part, leading a team of dedicated staff who are working extremely long hours to bring additional water online.

Cape Town, the situation is serious, but we can make it if we all do our utmost in partnership. We can avoid Day Zero by working together’.

At the launch yesterday Mayor de Lille reiterated that the City of Cape Town is looking to augment the supply of water for Cape Town, as it can no longer rely on rain water only. She said that the shortage of water in the Cape is the ‘new normal’, something that we will have to get used to. She implored Capetonians to continue to save water, the water usage still being higher than the target of 500 million liters per day. She announced that the City of Cape Town will publish a Water ‘Dashboard’ every Tuesday, to document water consumption as well as water saving in our city.