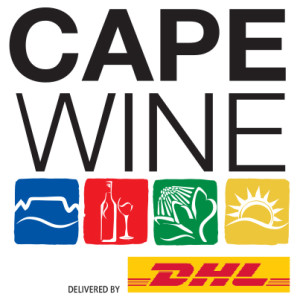 The highlight of the Keynote addresses to open Cape Wine 2015 yesterday was the refreshing address by Franschhoek wine and hospitality investor from India, Mr Analjit Singh of the Leeu Collection, seeing the positive in almost everything about his interaction with our country in his multi-investment programme in Franschhoek.

Mr Singh has bought three smallholdings behind Grande Provence, to become Leeu Estates; the former Rusthof is opening in December and is to be renamed Leeu House; Le Quartier Français has been added to the Leeu Collection most recently; as has Heritage Square across the road from the former Rusthof, on the main road. 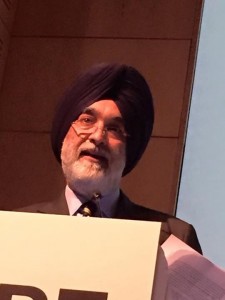 bought a 50% share in Mullineux Wines, now known as Mullineux and Leeu Family Wines. Recently the 110ha Roundstone farm was bought for the Mullineuxs, to grow their own fruit, in a move to secure their own quality supply, given the increasing number of foreign investors entering the local wine market. They have 9 ha under vine now, and will be planting another 21 ha over the next three years. They plan to grow Syrah, Grenache Blanc, Chenin Blanc, Clairette, Cinsaut, and Grenache.  Mr Singh emphasized the passion that he and the Mullineuxs have in expressing the Swartland in their wines, growing the reputation that Chris and Andrea Mullineux have already established with their wines in our country, after having worked in wine in the U.S.A, France, Spain, and then in our Winelands, winning the accolade of Platter’s 2014 Winery of the Year! Top viticulturist Rosa Kruger consults to Mullineux and Leeu Family Wines, and they focus on Rhône and Mediterranean style wines, producing what they do best.  In Franschhoek they have developed The Owner’s Vineyard, to make top quality wines, even replacing soils. In Franschhoek, additionally, a red and a white wine will be produced under a separate label.

Mr Singh mentioned ‘best in its class‘ twice in his talk, clearly reflecting his business philosophy.

Mr Singh spoke about price, wondering why wines can command a price of $1000 in the Napa Valley, when our local wines find it hard to command $100 a bottle for excellent wines. He urged the wine industry to produce wines of the highest quality, and to not undersell our wines. He also urged our industry to not copy other wine regions, such as Burgundy, but to rather create something unique.

Mr Singh was diplomatic in ‘addressing’ our government, and the issue with tourism visas, India being one of the countries affected with the requirement of Biometric data for visas for all members of the traveling party. He pleaded for the country to be opened up to all, to attract tourists and wine buyers, which will benefit employment locally. He is working on a community development initiative with other wine farmers in Franschhoek, he said. He called for a reduction of red tape, and for taxes to be reinvested into the wine industry.

Mr Singh heads up one of the largest companies in India, Max India Limited, and fell in love with Franschhoek when he came for the 2010 Soccer World Cup. Instead of visiting the village for a relaxing break, he was astounded by the friendliness of the locals, and wanted to invest in the village that has now become synonymous with Mr Singh, who appears as a kind and generous person, yet sets high standards. His confidence in investing in South Africa broadly, and in Franschhoek specifically, reflected throughout Mr Singh’s talk. 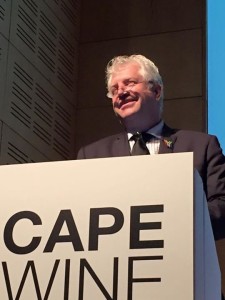 Alan Winde, Western Cape Minister of Economic Opportunity, has Tourism as well as Agriculture and Agri-Processing divisions, literally pairing wine and foods. He welcomed the 350 exhibitors and 100 plus buyers at Cape Wine 2015 over the three days of our country’s largest wine expo, usually held biennially.

Minister Winde said that Wine Tourism generates R6 billion per annum for our country’s economy, representing 1% of our country’s GDP. The wine industry generates R36 billion per year. Our country is seventh largest in volume in the world, and produces 4% of the world’s wine. One million bottles of South African wine per day are shipped around the world daily, he said. Exports have grown from 50 million liters in 1994 to 422 million liters last year. Our wine industry has been lauded for producing the largest volume of Fairtrade wines globally. Industry initiatives for enhancing sustainability were praised by Minister Winde. He encouraged tourism to the Western Cape, offering tourists good quality products and good value. 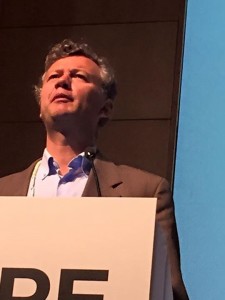 and he used the analogy of banking for the wine industry. A base of tradition is required, set by Jan van Riebeek 350 years ago when he made the first wines in our country. The sweet wines of Constantia were world-renowned, written about by Jane Austen and Baudelaire, and drunk in the royal courts of Europe, and even by Napoleon when he was held in captivity in St Helena.

Mr Jordaan said that wine is like a weed, choosing the most beautiful locations in our province to grow. Our wine region is unique, surrounded by two oceans, in one of seven floral kingdoms in the world, with diverse flora of 10000 species, and elevated mountain ranges. We have the oldest viticultural soils dating back 500 million years. New wine regions have been created, such as the southernmost Elim region, Bot River, Hemel en Aarde Valley, highest altitude Cederberg, the Spice Route, and more. The number of wineries has grown from 200 in the ‘Nineties to 600 today.  Somewhat more white wine varieties than red are planted (55%/45%), with a shift to red compared to twenty years ago. Half of our wine production is exported.

Mr Jordaan spoke about innovation in packaging, soon glasses becoming part of our wine packaging such as created by Stormhoek. He also mentioned Vivino, an App which provides information about the wine when one scans the label of the bottle. He highlighted local innovation, such as using Rooibos chips in making wine to prevent the use of sulphur, playing Mozart to the vines, planting Fynbos in the vineyards, documenting and rating all wines in a (Platter’s) guide, and even having the American President drink our country’s (Graham Beck) MCC. Mr Jordaan said the industry is still in its infancy, with an exciting future for creating an optimal blend of Tradition and Innovation. 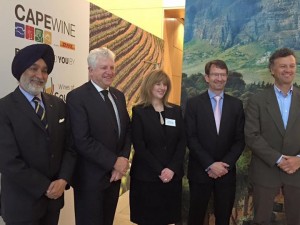 WOSA CEO Siobhan Thompson welcomed all the Cape Wine 2015  delegates, and illustrated that wines are just like people, being a rich mix of contrasts. Wine has nervy energy, and is the blend of a pragmatist and a dreamer. The quality of wines is improving as is the recognition of our wines. New blends and new varieties are being produced. We have icon wines with a long-term brand reputation. Fair labour conditions are being improved, and past wrongs are being righted.

Wine Tourism and Wine Marketing have made great strides in the last 21 years, said Ms Thompson, and has developed a young, energetic, curious, and dynamic South African wine industry!