It was by chance that I saw a programme for the ‘Food Hospitality World Conference’ when I registered for the Good Food & Wine Show.  With the e-mail from Wired PR came the Conference programme, with a fascinating list of talks by local and international food and wine speakers, bringing the world to Cape Town, and giving our industry a taste of what lies ahead for the Good Food & Wine Show running at the Cape Town International Convention Centre from 29 May – 1 June. What was unbelievable was the poor attendance in the exhibition hall in general and in the ‘Conference’ venue too, tiny in taking about 50 attendees, many of them hospitality students.

Yesterday’s list of talks was food and wine focused, and due to guest house commitments I arrived right at the end of Miguel Chan’s talk on Chenin Blanc, which ‘has gained a surge in popularity recently’, the programme notes 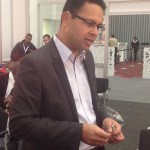 revealed. Chan is a wine buyer and sommelier at the Tsogo Sun group of hotels. He has promised notes about his talk, which I will add to this blogpost when received.

Very surprising was the talk by Michelin 2 star Chef Carlo Cracco from Italy, where he owns Ristorante Cracco in Milan.  He is unable to speak a word of English, so fired away in Italian, without it being explained to us that his colleague (we think) would translate batches of sentences for us.  On the TV screens photographs of his book, his 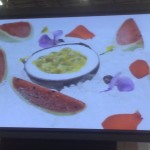 involvement as a judge in MasterChef Italy, and beautifully plated food was to be seen whilst we tried to understand what Chef Carlo was saying.  He said that it was an honour for him to be in Cape Town, also participating in the Good Food & Wine Show.  He spoke about the importance for chefs to understand the cultural environment in which they are cooking, the terroir from which the ingredients come, and to help educate others about the history and origin of the food that is being prepared.   The role of the chef has changed, having been a cook in the past, but now he/she need to communicate with their customers, who want to know the story of food, and the origin of the ingredients and the philosophy of the chef preparing the food.  Guests want to see the chef’s kitchen, and therefore he has opened his kitchen to a chef’s table, at which guests can sit down and eat while he and his team prepare the meal.

France used to have the world’s leading chefs, Chef Carlo said, but now chefs are travelling all corners of the world, to get to know more about cooking.  Chef Carlo said this is important to broaden their experience (it is ironic that Chef Carlo has not done much of this, not being able to speak English)!  Chefs from different countries help to expand the repertoire of techniques used by the chefs, learning from each other.  He said that ‘you need a heart to work in the kitchen‘.    He added that the advent of television in the kitchen has changed things for chefs, it being a powerful medium to reach a broad section of the population, and to 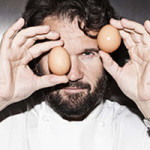 tell them the food stories they know about their suppliers.  TV shows add a dimension of entertainment, but for Chef Carlo the educational role is more important, there being so many food stories about Italian produce.  What the food shows have done is to increase the number of young cooking students.  Chef Carlo called for ‘Less is More‘ cooking and plating, with about three ingredients on a plate, and not 20 or more!  This helps the eater to differentiate the taste of the ingredients better.   Finally, he said the chef’s vision is important, and he/she must make time to find rare and unusual ingredients. 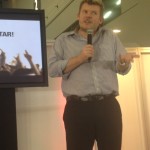 Robbie Williams, and clients such as M-Net, Qantas, BBC, BMW and more.   He invited us to ‘Break up with boring’, and said that celebrity chefs have become the new rock stars!   He told us that Jamie Oliver has a reputation of being a diva and difficult to work with, but in fact he is a pleasure to deal with.  He advised chefs wanting to do their own TV show, suggesting that they get it commissioned, funded by a sponsor, or participate in a competition such as MasterChef, but was scathing in referring it ‘to 20 seconds of fame for the winner’; find a hook that makes one unique; create a ‘sizzle reel’, to help sell the concept;  and build a brand, creating allied merchandise for customers to take home.  He cautioned that only enthusiastic chefs should do a TV show, they should focus, scathing in referring to Gordon Ramsay owning so many restaurants of which he loses Michelin stars as he is never there (are you listening Reuben Robertsons Riffel?); and finally he sounded a warning that the work in preparing the programs is very boring, and shared a philosophy of ‘look after those that looked after you‘ (did you get the message Reuben Robertsons Riffel?).

Whilst I have the highest regard for Wired PR and the good work they do, it was a surprise that no one knew about the three day show preceding the Good Food & Wine Show, and hosted three days after the end of Hostex, which is also aimed at the hospitality industry.  Restaurants are usually closed on Mondays, so organising the Restaurant talks on a Wednesday was a bad move.  Scheduling the best talks around lunchtime was also not clever, if the organisers had wanted to attract chefs.  Not surprisingly, none came!   It is a shame that so many chefs and restaurant owners had not heard of the Food Hospitality World exhibition and conference.  Attendance at the Good Food & Wine Show is a different story, starting today and running until 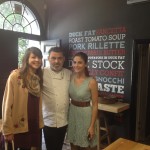