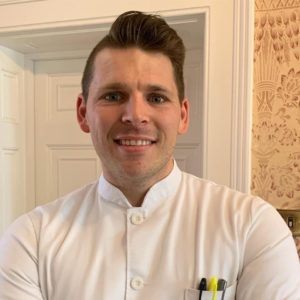 The most exciting news for the South African restaurant industry is that Interlude, at Leonardslee Lakes & Gardens in the UK, was crowned with a 2020 Michelin star today, the kitchen headed up by South African Chef Jean Delport, formerly of Benguela on Main in Somerset West. It follows in the footsteps of JAN restaurant in Nice, owned by South African Chef Jan-Hendrik van der Westhuizen, which also has one Michelin star. It may be no coincidence that both chefs studied at the very under the radar Zevenwacht Chef School.

From the first time that I ate at Benguela on Main, I became a fan of the restaurant and of Chef Jean, despite the Sommelier at the time, and the decor. Nothing else mattered, the food presented as Tasting Menus being exquisite. Somerset West has never been my favorite town, but I would find any excise to drive to it, to eat at the restaurant.  What shocked me at the time was that Eat Out disregarded the restaurant, never giving it a Top 20 ranking.

Benguela on Main owner Penny Streeter had bought two properties in the UK, one being Manning’s Heath golf course of which nine holes were converted into a vineyard for the making of sparkling wine for the first time in 2020, when the first grapes are to be harvested. Benguela Cove star winemaker Johann Fourie, formerly of the KWV, travels to the UK vineyard regularly to keep 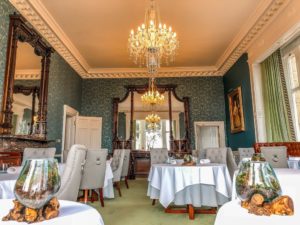 an eye over it, alongside his work in running the Hermanus winery. Not far from the UK Vineyard is Penny’s second property, Leonardslee Lakes & Gardens, Grade 1 listed gardens in Horsham, and first planted in 1801.

Chef Jean was enticed to move to the UK, to head up the kitchen of the Manor House of Leonardslee, offering High Tea in the afternoon, and fine dining at its Interlude restaurant in the same building in the evening. Just nine months after opening, Interlude has been awarded one Michelin star today, a fantastic feather in the cap for Chef Jean and his team. It is one of 23 new one Michelin Stars which were awarded today, bringing the number of one star Michelin restaurants in the UK and Ireland to 159. 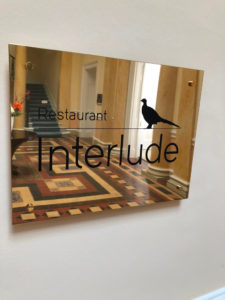 In the Michelin Guide 2020 this paragraph is part of the Interlude entry:

‘Both the Executive Chef and the Head Chef hail from South Africa, but the two surprise tasting menus keep their focus firmly on the local area, with produce foraged from the garden or sourced from nearby. Skillfully crafted dishes show the balance in their textures and flavours, and take on a creative, original style. They produce their own gin for the aperitifs and offer wines from their Benguela Cove Lagoon Wine Estate in The Cape.

In June this year my son and I visited Leonardslee, trying its Afternoon Tea, and lauding the changes that had taken place since we had last visited the property soon after its purchase in 2017. It was wonderful to see Chef Jean again, and to observe his growth since he left for the UK. I am even more sorry that we did not eat at Interlude, the drive back to my son’s home and he having to return to work the following day preventing us from doing so. 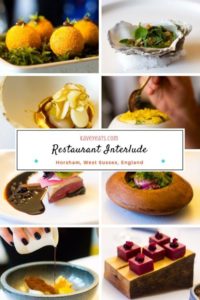 In June Chef Jean offered a 21 course Tasting Menu at Interlude, my notes about it from our visit being as follows:

‘At night time Chef Jean’s domain is Restaurant Interlude, the fine-dining restaurant, with 21 courses.. Fine-dining is his forté, and I have promised that we’ll come for a dinner on a next visit. Two dinner Tasting Menus are offered: the Garden Experience (£90) and the Estate Experience (£120).

I am sure that Chef Jean and his team will work at maintaining their precious Michelin star next year, and will work even harder in garnering more stars for Interlude in future.

A special love for food exists that gave shape to some of the world’s most ingenious dishes. No textbook or recipe can coax the magic that exists in a chef’s ability to draw inspiration from his environment and to highlight the significance of the seemingly smallest detail. 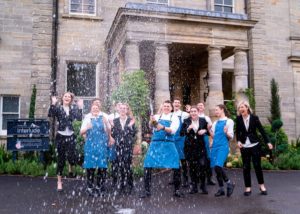 last night, hosted at the Hurlingham Club in London. The restaurant opened its doors only nine months ago, set within the historic Leonardslee Lakes & Gardens estate near Horsham in West Sussex.

The credit goes to the talented chef Jean Delport (31) who heads up the kitchen with an equally dedicated force behind him. It is only the second time that a South African born chef receives a Michelin Star for his restaurant and both of them studied at the same culinary institution outside Cape Town.

Where the love of food, wine, nature and service excellence comes together, a star is born. Set within these woodland gardens, the young Restaurant Interlude quickly became known for its special relationship to local produce. Guests get to dine in a historic mansion set in this beautiful and lush 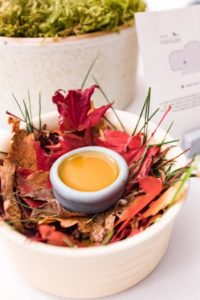 surrounds that is creatively and tastefully translated on every plate.

Leonardslee Lakes & Gardens forms a part of the Benguela Collection which includes Mannings Heath Golf & Wine Estate, also in the UK, Benguela Cove Lagoon Wine Estate (Hermanus) and Lakeside Lodge & Spa (Sedgefield). Owner and founder of the Benguela Collection, Penny Streeter OBE, set out to create a hospitality enterprise, investing in several restaurants on these properties. As with the medical recruitment business she built, the A24 group, Streeter has the foresight to invest in people she believes excel in their trade, taking a leap of faith where others won’t.

Growing up in Cape Town, Blouberg, chef Jean Delport has always been aware of his environment, his home town framed with mountains with the ocean on his doorstep. Karoo lamb and fresh fish was celebrated on the table with local vegetables, 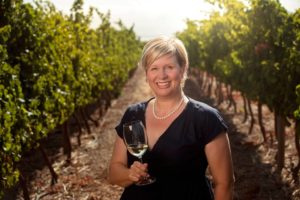 cooked simply but packed with flavour. “I was a busy teenager and I enjoyed helping my mom in the kitchen. Soon I was the one cooking most of the dinners for my family. When a friend introduced me to Crème Brûlée, I made it my mission to out cook him. I would research everything I wanted to know more about, until I was able to cook it to perfection.”

Delport met Streeter’s son Adam when he was completing a cooking course at the renowned restaurant Cavalli, just outside Somerset West, Cape Town. “When the heat is on in the kitchen, it is always a welcoming break when there is someone who can talk about football,” Delport adds jokingly. “But this also led me to my next career stop at Benguela on Main, the first fine dining restaurant the Streeter family started in South Africa.

“The owners had faith in me and offered me a blank canvas, trusting I would make a success of this 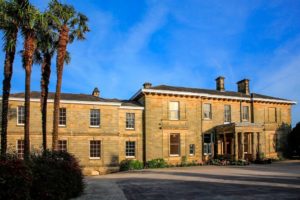 venture. Nothing can prepare you for the first six months of starting a restaurant so you need to rely on the basics of classic French cooking.” Benguela on Main quickly became known for their buffalo mozzarella and nectarine salad and the chicken parfait with smoked raisins and toasted brioche remained a classic until the end. “It is here where I learned the importance of using only a few strong ingredients that will guarantee that wow-moment.”

Delport’s culinary career led him to a garden of possibilities where everything he dreamt of as a young boy finally sprouted to life. “One of my most intimate memories with food was when I was shelling peas with my dad in his garden. He loved growing peas and sharing these sweet and earthy delicacies with me. Today as a chef I understand how important it is to respect the integrity of the smallest ingredient.

Starting a new culinary chapter at Restaurant Interlude, he imparted that same passion on chef Annie Badenhorst, a fellow student and colleague, that now holds the fort as executive chef at the Moody Lagoon Restaurant at Benguela Cove Lagoon Wine Estate. Like the South African Michelin-star chef Jan Hendrik van der Westhuizen, they started their career at the Zevenwacht Chef School.

“A kitchen is like a well-oiled machine – every cog plays a role to make everything seem effortless. You need your team to make a success of it. It is important to stay progressive and to build on your strengths while you never forsake the basic principles. Shortcuts will never pay off.” It all boils down to hard work and to remain true to yourself. “With your own spin on things off course.” Butter will always remain his magic ingredient, and limes are completely underestimated as an essential ingredient to highlight flavour, Delport says. 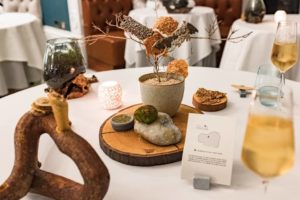 Age old traditions of curing fish and meat must be one of the reasons South Africans prefer bold flavours. Show me a South African that doesn’t love biltong! Guests at Restaurant Interlude are introduced to a flavour journey and I think that the majority of guests like being pushed out of their comfort zones.”

Delport’s imagination feeds off the ever-changing degustation menu at Restaurant Interlude, alluring guests with a sense of surprise in every course. The Restaurant Interlude philosophy embraces local, ethical and organic produce and most of the ingredients used are foraged from the estate. Every course unfolds an unexpected twist, like a smoky glaze reminiscent of a traditional South African braai.

“We are blessed with fresh fish and great shellfish; the scallops and oysters are fantastic. People visit a restaurant with a certain perception. It is up to us to capture their imagination using our surroundings as inspiration. Smart cooking echoes smart winemaking. It is the art to feel how far you need to intervene to allow a sense of place to shine through, to always respect the integrity of the produce at hand and then to craft it in a way that is unique to you.

The quest in finding natural gems, led to fascinating experiments with the sap of the Birch tree. In the beginning of Spring, when nutrients rush up the phloem of the tree, the earthy tasting sap is harvested and reduced to a syrup. They harvested 1023 litres this year that gave them five litres of syrup!  “We serve it with the raw, smoked scallops and pork belly to add a beautiful, earthy and savoury flavour with a hint of sweetness. South Africans will always be in pursuit of flavour and investigate ways of how to layer flavour in the simplest dish. It is a part of our heritage.” 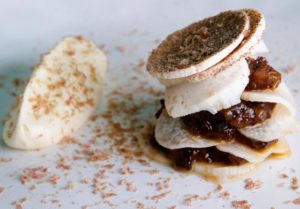 And what would Delport like his guests to leave with?

“A smile first and foremost. But I want them to feel like they had a unique experience, something different that was executed with care. The experience should ignite a love for the place they have just visited as much as they loved the food that was prepared for them. Every other course has an interactive element that reveals they journey, flavour by flavour.”

If the “wow” is captured by simplicity – like a honey dish layered with elements of pollen, wax and liquid gold set off against the sweetness of apricots and sheep milk sorbet, there is certainly a hive of customers lining up to bee there first.

For more information and high-resolution images, contact (+27)82 072 5451 or send an email to Samarie Smith samarie.smith@benguelacove.co.za