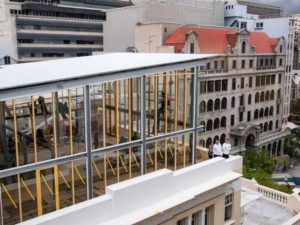 In an interesting move not seen before, La Colombe announced that its Restaurant Manager Jennifer Hugé would be leaving, after 14 years, to join a new city centre restaurant, but without providing details. Yesterday, the details were revealed, Hugé joining forces with Chef Ashley Moss in Chef Peter Tempelhoff’s new FYN Restaurant. The La Colombe restaurant group has no link to the new restaurant. 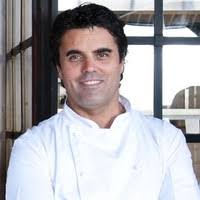 describing our indigenous plant life fynbos. It is said to be ‘…the realisation of a dream’ for Chef Peter. The cuisine is inspired by ‘South Africa’s culture, lore and society as well as Tempelhoff’s many journeys around the world’.

The new Restaurant and Bar is located on the top floor of Speakers’ Corner in Church Square, on Parliament Street in the city centre. It has a spectacular view of Lion’s Head and Table Mountain, and the building space has a ‘… Lower Manhattan feel with Tempelhoff absolutely loves’. Valet parking is offered for Lunch and Dinner. Landlord Urban Lime owners Katie and Jonny Friedman searched carefully for the right restaurant match for the space in their special heritage building with a view.

Tempelhoff has teamed up with two strong players, his Chef Ashley moving across from Tempelhoff’s Greenhouse Restaurant at Cellars-Hohenhort, having been in charge of its kitchen for the past four years. Hugé has very strong credentials as a service-driven Restaurant Manager, and won the inaugural John Psillos Award for Outstanding Contribution to Service in 2016. The La Colombe 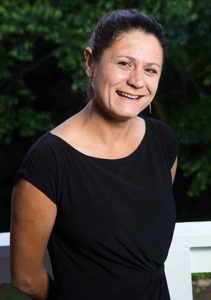 media release provided the following detail about her:

’Cape Town, 6 October 2018​) Jennifer Hugé will leave her position as Front of House Manager of La Colombe to pursue a new restaurant venture in Cape Town’s CBD, set to open in the coming weeks.

Hugé originally joined the La Colombe team as a waitress under Franck Dangereux, quickly moving into a relief maître d’ position, and subsequently front-of-house manager. Over the years she has become an iconic part of La Colombe, managing to tutor many inductees to the group, including current Head sommelier Joseph Dhafana.

Says Proprietor Chef ​of La Colombe, Scot Kirton, “We have been privileged to have Jennifer with us for the last decade, as she has been an instrumental part of driving La Colombe to become what it is today. She will be sorely missed, and our entire team wishes her all the very best in her new venture.”

Frequent diners at La Colombe will know ​Hugé not only for her warm and welcoming presence but incisive attention to detail – which earned her the inaugural ​2016 Eat Out John Psillos Award for Outstanding Contribution to Service​ – and also for her spectacular food and wine pairings, which complemented the iconic cuisine, delivering an exceptional, holistic dining experience.

During her time at La Colombe, Hugé has been an integral part of the team that has made a number of local and international awards possible, including TripAdvisor’s Best Restaurant in Africa in 2016, runner up in the 2015 Eat Out Awards and featuring in the top 100 of the World’s Best Restaurant Awards 2017’.

It’s a shame that so little information about the new restaurant is being revealed, so soon before its opening. No opening date has been revealed to date.

POSTSCRIPT 1 December 2018: Two days before FYN restaurant opened, I received a letter from Chef Peter Tempelhoff, banning me from his yet to open restaurant, reversing his welcome to me at his new restaurant just ten days earlier, at the Eat Out Awards, confirmed by his GM Jennifer Hugé too. Industry talk condems his action, and some serious diners have decided to boycott the restaurant in support! This is my response:

POSTSCRIPT 18/12: In settlement of an urgent application at the Cape High Court today arising out of the wording of parts of the FYN Blogpost dated 28 November 2018, I agreed to change the title and the second paragraph of the Blogpost to the present wording, and Tempelhoff agreed to uplift the ban against me visiting and reviewing his new restaurant FYN. This  settlement agreement was made an order of the Court by Judge Salie Hlophe today.

@minskymaus checking the #birds in the #garden #Ki

The Restaurant at @grande_roche opens in November