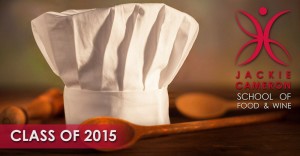 I was privileged to spend a part of yesterday at the Jackie Cameron School of Food & Wine outside Hilton, where former Eat Out Top 10 Chef Jackie Cameron has been teaching and training a handful of chefs since April to enter the restaurant industry through an 18 month theoretical and practical course.

Chef Jackie showed me around her School, and expressed gratitude to her parents for moving to a different section of their family home, so 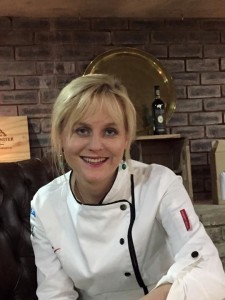 that she could realize her dream of opening the School. They have added a building housing the School classroom and kitchen, and have created a private wine cellar for small events, as well as a dining room with specially made pallet tables. They have created a room from which they can welcome visitors in future, and where Chef Jackie is planning an advisory service to locals about their ‘food flops’, and how to fix them. She will also sell a special blend of Terbedore coffee developed for her, and Simonelli coffee machines. 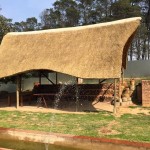 She hosts private functions, tailor-making events involving the preparation of food, and then enjoying eating it, suited to the budget of the clients.  This will lead to a planned restaurant next year. Her father is a very handy person, and assisted in the building changes, and added a lapa for the Weber classes Chef Jackie hosts on the first Friday of every month. Three students can be accommodated on the property, and a fourth (guest) room is being worked on,

Chef Jackie prepared and planned for the opening of her School for a number of years, obtaining the City and Guilds accreditation for the School in a tough and thorough process. Chef Jackie showed me the garden near the front door, with flowers, herbs and vegetables 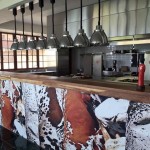 planted for the students to pick. On entering, one sees a wall poster of the indigenous Nguni cattle by Ed Schroeder, repeated on the counter to an open kitchen at the pass.

Chef Jackie is assisted by Chef Elaine Boshoff, who worked with her at Hartford House. Chef Jackie did a one-year intensive course at the Christina Martin School of Cooking, rated the fourth best chef school in the world in its hey day. For her kitchen she was advised by Culinary, and she has gas 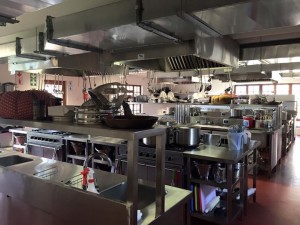 stoves (including Charvet) and electric ovens. There are serious extractor fans in her two kitchens. The library of recipe books is catalogued, and the students need a card to take them out. On the steps up to their kitchen, the students are encouraged to ‘never give up‘. Each student has her own work station, including a stove and oven, a basin, a fridge, as well as cooking utensils, including a Wonderbag for electricity-saving and slow-cooking.

Chef Jackie had invited me to speak about Social Media and blogging, which I did gladly, one of the students having a particular interest in starting her own blog. I shared that accurate spelling on menus is vital, one seeing so many spelling errors on menus and wine lists, especially with French terms. We spoke about coming out of the kitchen to greet patrons and obtain feedback as a chef. We also spoke about each of the students developing their own brand, and needing to be careful 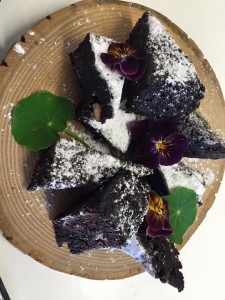 about what they post on Facebook, as their prospective employers would check their page in future. Kate made me a dry cappuccino, and brought a beautifully presented plate of chocolate brownies with it to the classroom.

Whilst the students enjoyed a class of cake decorating with award-winning outside expert Pam Alty, I was spoilt by Chefs Jackie and Elaine to a three- 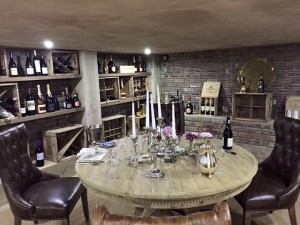 course lunch in the wine cellar, candlelit when there was a temporary loss of power. 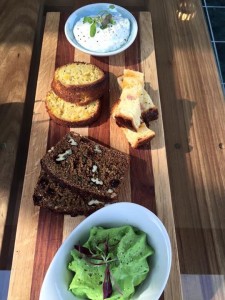 and raisin bread. Butter was available, as was a bowl of Maas curd and micro herbs, and a spinach spuma, all of which the students had assisted in making and baking (taking baking lessons with Graham Taute).

Their professionalism as chefs came to the fore when I had to tell Chef Jackie that the one thing I am allergic to is mussels, after she told me that they had prepared a mussel soup. Within a few minutes they had made an alternative plan, and I was served a 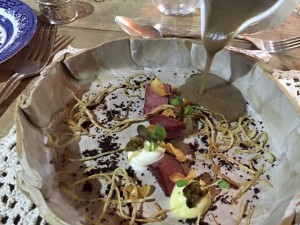 lentil soup, in a bowl which contained 35-hour sous-vide tongue, Greek gourmet yoghurt, Baba Ghanoush, crispy capers, potato spaghetti, as well as a nut and breadcrumb soil.  Chef Jackie poured the soup into the bowl at the table. This course has been intended to be paired with a Midlands Abingdon Viognier 2014, which I declined.

We spoke about the wine side of the course, and Cathy Marston will do an intensive Level 2 WSET course for the students. Winemakers from Muratie, Grangehurst, Le Riche, and more have or will visit the School. Every week Chef Jackie exposes her students to a wine variety, tasting different styles. She receives sample bottles from Vinimark for the students to taste. A number of chefs will address her students over time too, and some suppliers have already visited. The students visited major local suppliers in their first week. 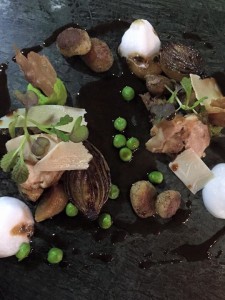 The dessert had peanut butter semifreddo as a foundation, with a 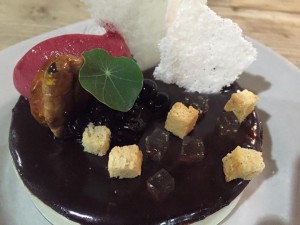 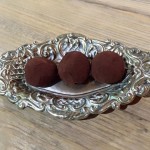 biscuits, and nasturtium leaves.  The cherry on top, so to speak, were truffles made with cigar infused ganache, accompanied by another of Kate’s dry cappuccinos.

Chef Jackie has tremendous energy, and was up and down the stairs from the cellar to the kitchen, whilst checking on her students regularly. I was impressed that French lessons are part of their course. Chef Jackie is very passionate about the food bounty on the Midlands Meander, and supports and promotes the suppliers as far as possible. She gave me a copy of her first cookbook, which was signed by herself, Elaine, and the students Katie, Carla, and Cara. A second book by Chef Jackie 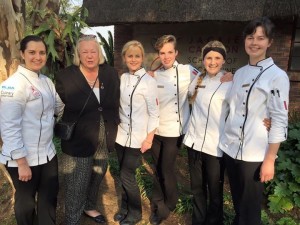 will be in production soon. Despite being so busy with her School, Chef Jackie made time for me at her School and to recommend restaurants to eat at, and food and wine suppliers to visit in the Midlands! Her students are incredibly lucky to have Chef Jackie as their culinary guide, and will be guaranteed jobs as soon as they graduate!