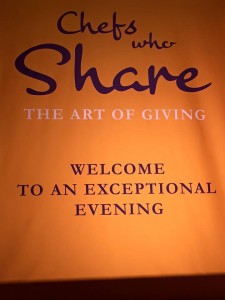 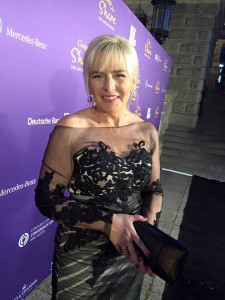 The chefs were paired as follows, each of them having one top Sommelier, and one Young Chef of the Year Finalist as an assistant too: 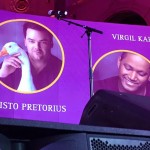 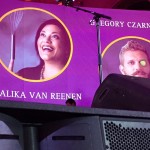 at the Cape Grace and Gregory Czarnecki of Waterkloof, and Sommelier Neil Grant of Burrata, Open Door, and Bocca. 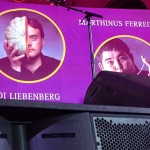 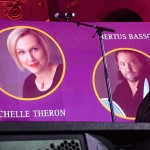 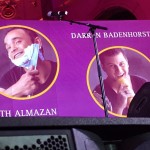 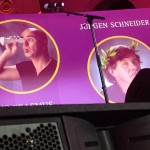 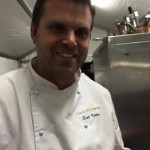 the table. I was delighted that I sat at one of three tables for which Chefs Scot Kirton of La Colombe and Chantel Dartnall of Mosaic cooked.  The detail in the dishes was outstanding, 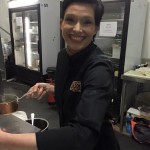 as were the detailed notes we received about each of the dishes and the wines paired with them. Chef Chantel’s mother Marie and her partner also sat at our table, as did long-standing acquaintances Charles and Elmien de Kock, and wine expert Juliet Cullinan, who now lives in Monaco.

Chefs Scot and Chantel prepared a four-course menu especially for their three tables of 36 guests in total, each set of chefs preparing a separate menu for their tables. The brief was to prepare a starter with a fish element, a soup course, a main meat course, and a chocolate-based dessert, each chef team having carte blanche in its choice of dishes served. Food and Beverage Manager for the evening Gavin Ferreira of the Twelve Apostles Hotel & Spa did a fantastic job in coordinating the food coming out of the kitchen for the 252 guests. 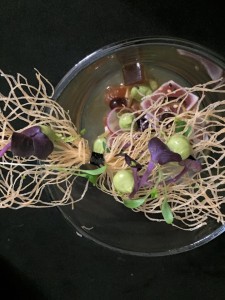 The starter course at our tables was presented to the table with a display of liquid nitrogen creating clouds of smoke.  The bowl of tuna tataki and tartare, organic chipotle smoked by the La Colombe pastry chef,  avocado, shiitake, kataifi, and confit lemon looked beautiful, and had been created by Chef Scot and his team. Chef Scot is an avid tuna fisherman. His dish combined a French Asian background with a South American influence, he explained in his notes for the dish. This course was paired by Sommelier German Lehody of Mosaic with Glen Carlou Unwooded Chardonnay 2014. 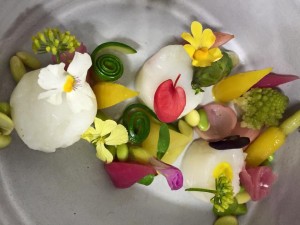 Chantel and her team, for which the plating was done in bowls in the kitchen, which I had photographed there. At our tables the broth was added to an infuser, heated from the bottom, drawing the base broth up into a glass bowl 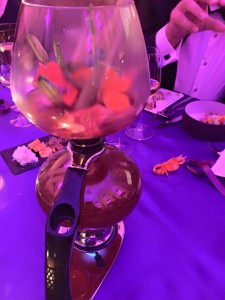 with hibiscus and lilies, infusing the taste of the flowers into the broth, yet not detracting from the West Coast rock lobster which had been in the bowl before the vegetable tea was added to our bowls. The name of the dish ‘The Alchemist’s Infusion‘ was apt! This dish was paired with Lemberg Hárslevelü 2013. 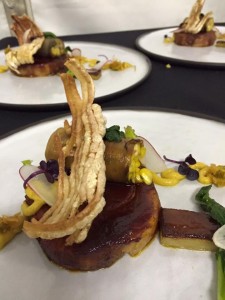 I left before the dessert was served, feeling another bite of the flu which had been plaguing me for the past 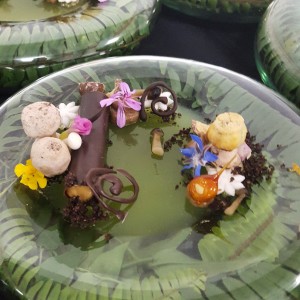 week. Chef Chantel had created ‘The Fantasy Forest‘, which was made with Guanaja 70%, Caramelia 36%, and Ivoire 35% chocolate, as well as dried pears. Chef Chantel drew inspiration for her dish from the soil colors, dry tree bark, droplets of tree sap, as well as wild flowers she had seen in the Francolin Conservancy in which their hotel and restaurant is based. The dessert was paired with Vondeling Sweet Caroline 2012.

Earlier this week we were introduced to the seven Finalist Young Chef of the Year candidates, and tasted their creative canapés.  The canapés formed one part of the evaluation of the ‘Chefs who Share’ Young Chef of the Year 2015, the other part of the evaluation being the handling of the chefs of themselves in the time that they were in Cape Town, including during the ‘Chefs who Share’ Gala Dinner. 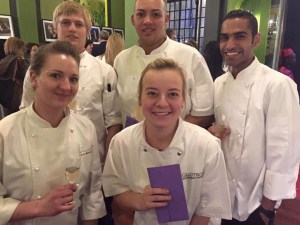 Opulent Living sent 75 restaurants and hotels invitations for their chefs aged 29 years and younger to participate in the competition. A total of 43 chefs entered, meeting the brief of creating a canapé not costing more than R25 each.The chefs had to send a recipe and methodology, a photograph, and further background information about their canapé, which was evaluated by a panel of judges consisting of Chef and TV presenter Lentswe Bhengu, Chef Tracey Younghusband, Silwood Vice-Principal Carianne Wilkinson, Food24 editor Tessa Purdon, cooking celebrity Naz Moosa, and Opulent Living’s Florian Gast. Chef Reto Mathis of Swiss International Air Line flew into Cape Town earlier this week 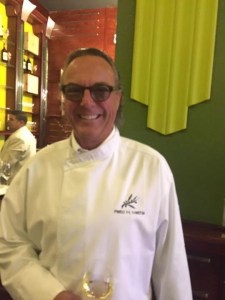 as the international patron of ‘Chefs who Share’ Young Chef of The Year Award. He and Lentswe evaluated the canapé creations, and the interaction by the young chefs with the Chefs who Share chefs they worked with in the two day period.

The seven Finalist Chefs and their canapé creations, which were served on Thursday evening, were the following: 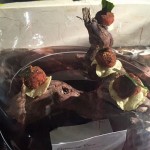 Germaine Esau, Sous Chef at Makaron Restaurant: ‘Beef in the vines under African skies, an enrobed beef tartare on a potato crisp, very creatively presented on vine branches. Germaine is an experienced competition winner, having already won the 2014 Unilever Food Solutions Senior Chef of the Year, second in the 2013 Young Chef  of the Year of the Cape Chaîne de Rôtisseurs, and joint 4th in the International  Jeunes Chefs Rôtisseurs in 2014. 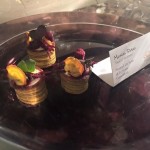 ‘Small & In-between’. She baked a Baumkuchentorte, with a delicious soft beetroot and cream cheese centre. 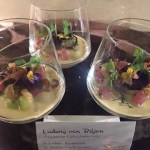 Ludwig van Biljon, Demi Chef de Partie at Indochine at Delaire Graff:  ‘Singaporean Laksa panna cotta’, with tuna tartare, tangy cucumber, and a curry paste, creating strong Asian flavours. Nice was to see the flowers in the canapé design, the only one of the seven chefs to use flowers. 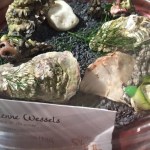 Roche:  ‘Motion of the ocean’, an attractive presentation with shells, using poached oyster and compressed apple. He studied at Warwick Chefs School in Hermanus, and worked at Granny Mouse Country House in the Midlands before joining Grande Roche two years ago. 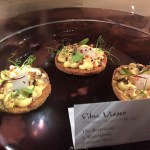 Edna Visser, Commis Chef at The Restaurant at Waterkloof: ‘The land, the sea & the sky’, using apple cider and scallops in her creation. 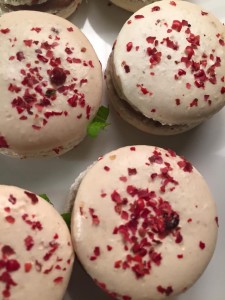 Indigo Restaurant, Grootbos Private Nature Reserve: ‘Pink peppercorn macaroon with duck liver pâté and candied apples’, a very popular canapé. Her canapé, her vivacious personality, as well as her conduct during the two days in Cape Town was judged the best, and she was named ‘Chefs who Share’ Young Chef of the Year 2015 during the Gala Dinner. She has won a trip to Europe, working in a Michelin-star restaurant, and visiting Champagne, and Moët et Chandon in Épernay specifically. 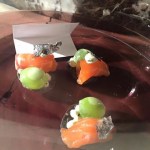 Last week we were introduced to a Preview of the Art and experiential items, which were auctioned on Thursday evening:

*   A 9-liter bottle of The Secret 7 Blend made by the seven Sommeliers participating at the Gala Dinner on Thursday. At a recent function, 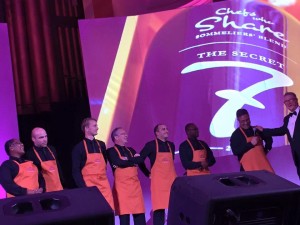 one of the sommeliers told me that the wine has been made at a Malgas winery. The components of the Blend will remain a mystery. It raised R21000 at the auction.

*   A 12-day cruise around the Mediterranean, on the Crystal Serenity

*   Two tickets to the Laureus World as Sports Awards 2016

*   A wine experience with wine writer Michael Fridjhon, including dinner at Tulip House. 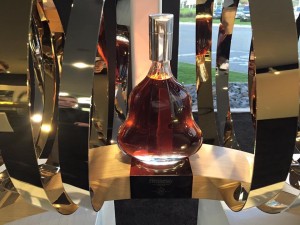 A Hennessey 250 Collector Blend decanter and Celebration Display, which caught my eye in the Mercedes-Benz showroom last week. As I was photographing it, Niel Mouton from the activation company Clint Cawood Professional Productions came to polish the bottle even more, to make sure that it was perfect. It is seldom that I have seen such passion for the job by a young man, who shared information with me about the cognac, and its history. His company was responsible for its launch in Johannesburg in the Circa Gallery, the most successful of all the international launches, including those held in Moscow, Ghuanyzhou, and New York. He told me that one bottle can cost up to R45000.

*   In the last minute Chef Reto added an Auction lot, comprising a flight for two to Zurich, and three nights in St Moritz, attending the St Moritz Gourmet Festival which he organizes. 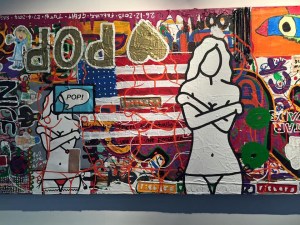 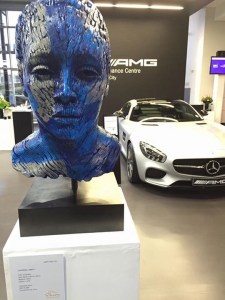 Anton Smit, Lionel Smit (right), Russell Travers, and Schalk van der Merwe was cleverly displayed throughout the
showroom, complementing the artful Mercedes-Benz cars. The highlight of the Auction was the R180 000 final 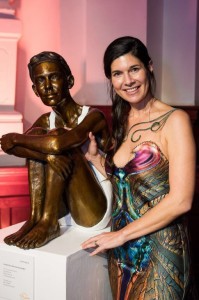 Our table was astounded by the uniqueness of the cuisine that we were spoilt with, each dish being special in its presentation and taste. Chefs Scot and Chantel came to our table regularly, and were kind in allowing me to photograph their dishes in the make-shift 42 meter kitchen alongside the City Hall, shared with the other six chef teams, as the lighting inside the City Hall was not ideal. I look forward to seeing how the Young Chef of the Year Finalists grow over time, and which restaurant kitchens they will eventually run, their calibre already being evident!

Disclosure: We received a bottle of Bulgari Omnia Eau de Toilette and a box of Frey chocolates on departure.  I was an invited guest of Opulent Living.