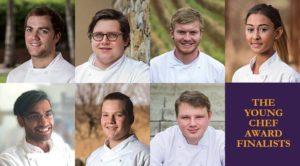 A total of 77 chefs under the age of 30 years was invited to participate in the Chefs who Share Young Chef Award 2016 competition. The brief was to design a creative canapé for the Chefs who Share Gala Dinner. Not only will the canapés of the seven Finalist Young Chefs be served at the Gala Dinner, but they will also work alongside the fourteen local and international chefs in cooking for the Gala Dinner, esteemed chefs such as Margot Janse of Le Quartier Français, Marthinus Ferreira of DW Eleven-13, Chris Erasmus  of Foliage, Vineet Bhatia from London, Vincent Rodier of LUX* Resort & Hotels in Mauritius, and Dirk Gieselmann of the Four Seasons Hotel The Westcliff.  The winning Young Chef will be judged on the creativity of the canapé, as well as on his/her team spirit, ability to work with top chefs, personality, and skill to be an ambassador for our country and for Chefs who Share.

The winner of the Chefs who Share Young Chef 2016 will win a trip to Europe, flown by Swiss International Air Lines, and will work in a Michelin-star restaurant. The prize includes a visit to the Moët & Chandon headquarters in Épernay, to experience the culinary and oenological highlights in Champagne. The selection of the Young Chef Award 2016 will be made by Reto Mathis, Swiss International Air Lines Ambassador, and by Lentswe Bhengu, Ambassador for the Young Chef Award.

The seven Chefs Who Share Young Chef Award 2016 Finalists are the following:

#   Anand Bhana of Hartford House, who is a Finalist for the second year running

The Chefs who Share Young Chef Award 2016 has the potential to change the lives and to promote the growth and development of the finalists generally, and of its winner specifically.  Last year the Young Chef Award was won by Jamie-Lee Saunders of Grootbos.