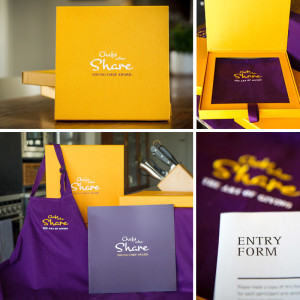 Opulent Living has announced the seven Finalists for its Young Chef of the Year 2015 competition, with six of the Finalists working at Western Cape restaurants and one in KwaZulu-Natal.

The forty entries were evaluated by a panel of judges, consisting of Chef Lentswe Bhengu, Chef Tracey Younghusband, Silwood Vice-Principal Carianne Wilkinson, Food24 editor Tessa Purdon, cooking celebrity Naz Moosa, and Opulent Living’s Florian Gast. They evaluated the entries received from young chefs under the age of 30 years, who were tasked to design a canapé costing no more than R25 each, having to send their recipe, photograph, and costing of their dish. The competition entry forms were sent to 75 top restaurants around the country, with an invitation to enter.

The young chef candidates were enticed to enter the competition, with the carrot of being flown to Cape Town two days before the Chefs who Share – The ART of Giving Gala Dinner in the City Hall on 10 September, to work on their canape’s, which will be served with the Moët & Chandon Impérial pre-dinner drinks. They will also become assistants to the seven sets of chef teams of two, preparing a unique four-course dinner for 36 guests each, a total of 240 guests paying R3000 each to attend the dinner. The seven Finalists will work under the mentorship of Swiss Chef Reto Mathis.  The winner will win a trip to Europe with Swiss Air Lines, cooking in a Michelin-star restaurant, as well as visiting the Moët & Chandon headquarters.

The seven Young Chef of the Year 2015 Finalists are:

*   Edna Visser, Commis Chef at The Restaurant at Waterkloof: ‘The land, the sea & the sky’ 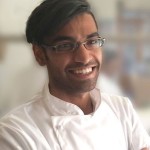 I was lucky to meet the KwaZulu-Natal Finalist Anand Bhana at Hartford House last week, who joined their kitchen in June, after having done an internship at the five-star country hotel earlier this year.  He is excited to have been named a Finalist so soon in his culinary career. The Hartford House job is his first since completing his 18-month studies at the Prue Leith Chef’s Academy.  Anand told me that he is excited to work with new Executive Chef Constantijn Hahndiek at Hartford House, enjoying the quiet setting and learning a lot in his first full-time job. For his dish ‘Ocean Adventure‘ he 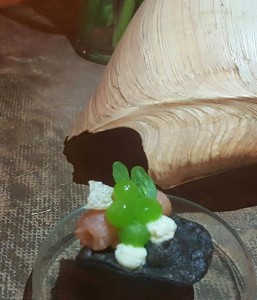 made pasta dough, to which he added squid ink, making it look like black coral reef when deep-fried. He added salmon gravadlux, lemon and orange zest, herb cream cheese, topped it with green cucumber and apple pearls, and garnished it with dried salmon skin. Anand’s dream is to open his own fine-dining restaurant eventually, probably in Cape Town.  Anand is a talent to watch!