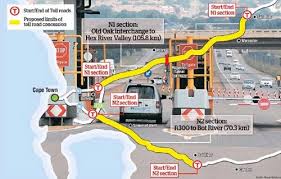 Brett Herron, the City of Cape Town Councillor and Mayoral Committee member for Transport, Roads, and Stormwater, is a busy man, fighting the Golden Arrow Bus Services on the one hand, and the South African National Road Agency Limited’s (SANRAL) proposed N1/N2 Winelands Toll Highway Project on the other.

Yesterday we heard in a news broadcast that Golden Arrow is taking its appeal of a recent court decision to allow the roll out of further MyCiTi Bus routes in Cape Town to the Supreme Court.  This will mean a further delay of the eagerly awaited and heavily delayed launch of the Atlantic Seaboard route from Hout Bay through Camps Bay, Sea Point, Tamboerskloof, to the city centre and the V&A Waterfront.  Last month the City’s bus service did not run for three weeks due to the SA National Transport and Allied Workers Union calling a strike over wages, and caused traffic chaos when the Justin Bieber and Bon Jovi concerts were held in the Cape Town Stadium!

Today the Councillor has issued a media statement, triumphantly announcing that the City’s urgent interdict to stop SANRAL from going ahead in developing its proposed Winelands N1 and N2 toll roads has been successful, due to then national Transport Minister Jeff Radebe not having been fully informed about the costs of the toll road development.  The N1 toll road is planned from the R300 turnoff to Sandhills near Worcester, and the N2 toll road from the R300 turnoff to Bot River.  We have written previously that wine farmers and estate owners, and agricultural producers, were up in arms when the toll road announcement was first made public 18 months ago, driving up food costs and being bad for tourism!

The City’s interdict application was assisted with some toy-toying outside the Western Cape High Court by his fellow Tourism, Events and Marketing Mayoral Committee member Grant Pascoe, and a rent-a-crowd. Pascoe is better at marketing the DA than he is at marketing Cape Town via his newish Tourism, Events and Marketing Directorate, having announced the interdict victory on his Facebook page, and linking the victory to the DA!

The City of Cape Town scored two victories in its attempt to halt the proposed N1/N2 Winelands Toll Highway Project in the Western Cape High Court this morning.  The court has granted the City’s application for an interdict against the South African National Roads Agency Limited (SANRAL), seeking to halt the Agency from taking any steps to implement the proposed project, pending the final determination of the City’s review application. The City was also successful in its application that SANRAL be compelled to provide a number of documents which formed part of SANRAL’s decision making process; and which SANRAL have been refusing to provide.  The City’s people and its economy simply cannot be burdened by unnecessary toll roads.  SANRAL’s decision is one that affects us all, but that will have a particularly profound effect on the poorest and most vulnerable groups that call Cape Town home”.

The toll road project would place a R10 billion financial burden to provide services to SANRAL, which the City of Cape Town’s ratepayers would have to bear.  The bulk of the Western Cape wine estates and its visitors would be affected by the implementation of toll roads outside Cape Town.