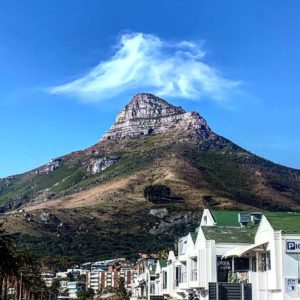 #Grateful for another sunny day, at 22C; for another social and eating-out day; for a peaceful day and one of spoiling; for a short surprise visit for tea by Vivian Warby; for discovering Bo-Kaap Deli, now less than half the size of the former Batavia Café, meeting the owner Munier, and being impressed with the canopies erected over the pavements, given the reduced seating space inside; for a lovely catch up lunch with Michael MacKenzie at Oxalis Eatery in Wale Street; for chatting to Rafael and Marta, owners of OpenWine, which they have reopened on Wale Street, and meeting the most stunning Brazilian-South African Miguel there, singing my Blog praises – see the video 😱💙; for a walk through Camps Bay, happy to see that the City of Cape Town has erected safety barriers where the fence came down in the wind storm on Victoria Road, even if it took them two weeks to erect them; for a chat with Law Enforcement Officer Ivor Ramsay, always welcoming me into his office; for being happy for a big operation of removing Homeless structures around Maiden’s Cove and below Camps Bay High today; and for being happy and healthy. 🙏💙

My Blogpost today was about the team of former The Shortmarket Club chefs, who opened Tintswalo Kitchen two months ago, leaving the restaurant to return to the Shortmarket Club, said to be reopening after it closed down at the beginning of Lockdown, leaving Tintswalo in the lurch, but opening the door to Chefs Warehouse to open a branch there, the fourth in Cape Town and the Winelands. Sadly I won’t be able to eat there anymore.

Oxalis Eatery had a nice vibe, and both Michael and I ordered the yellowtail ceviche, served with dune spinach, avocado, and a yummy soy and lime sauce. It was topped with a crisp made with squid ink and sago, unbelievable, as well as a beetroot and Bococini salad. Michael and I had not seen each other in two years or more, so there was a lot of catching up to do. Michael loves eating at top restaurants as much as I do. Tomorrow he returns to McGregor. #Thankyou for the spoil.

We chatted with Arno, not in a hurry to lend his name to any restaurant, he said. I was shocked to hear that all the Janse & Co restaurant staff were retrenched by the restaurant investors, including Arno, after whom the restaurant was named. The restaurant is to continue operating. 😱😢

I like the look of the new Bo-Kaap Deli, offering a menu for Sit-Down Breakfast and Lunch, as well as Deli items such as Woodstock Bakery sourdough bread, bagels and croissants from the Baker Brothers, and homemade koesisters, cheesecake, and other cakes.

Almost a week after posting my Sour Service Award to Checkers Sea Point someone from the company called to apologise. 😱

The Corona Virus Lockdown (Level 5), announced by our President Cyril Ramaphosa earlier to commence on 27 March and to continue until 16 April, subsequently extended to 30 April, lowered to Level 4 from 1 May, lowered to Level 3 from 1 June, lowered to Level 2 from 18 August, and lowered to Level 1 from 21 September, is an unprecedented event in my lifetime. I am posting my daily Facebook post to journal this Corona Lockdown Journey, perhaps to serve as material for a future Book.

Note: My Blog is being showered with ads by Google, as are most other web-related articles. Please be assured that I have no control over this at all, and that I receive no revenue for this unauthorised use of my Blog as its advertising platform.