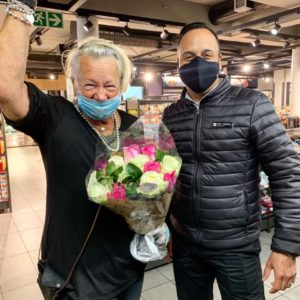 #Grateful for all the glorious rain that has fallen since last night, with a happy garden, and it not being too chilly; for two walking gaps in between the rain, allowing me a Camps Bay walk and a Woolies shop on the way at lunchtime, and an afternoon one in Bakoven with slight drizzle; for the amazing kindness of receiving a bunch of roses from Woolies Manager Gary Arendse for Women’s Day, so spoilt with this branch so close by; for being so inspired by all the stories of the women restaurant owners in the Cape, posted here as well as in the Facebook Group; for surviving a dreadful attack in a Camps Bay Facebook Group; for a rainy day afternoon snooze; for dancing the balance of my steps to Kfm; for a Discovery Cashback for my healthy Woolies food purchases; and for being happy and healthy. 🙏💙

I asked all the female Restaurant owners that I know plus others I was referred to why they started their restaurant(s), what makes them different to men as a restaurant owner, and for a Women’s Day wish. I love the diversity of the replies. I was surprised at how few women own restaurants. Restaurant owners included Jennifer Morris Judi Fourie Prim Reddy Sharon Segall Benitha Nel Judy Lamprecht Justine Bee Isabella Niehaus

So proud of these strong yet feminine women, none complaining about the tough times they are operating in. 👏👏👏

There is a war brewing in Camps Bay with a past homeless person Michael who worked for me last year in cleaning up Camps Bay, I having to fire him when he didn’t pitch for work, and couldn’t take instructions. Today a friend of his posted in the Camps Bay Community Group, warning about ‘that Chris woman’ as being a ‘con artist’ about my claims of cleaning up Camps Bay. He must have blocked me, so I could not see it, but friends sent screen shots. It went on and on, and some locals reported it to the Group Admin, and gave him a blast. What shocked me is that the Group Admin approved the post, and took hours to remove the post and ultimately to block him from the Group. It hit home to me that this was such male verbal abuse on Women’s Day, of all days. 🥵🥵🥵

I was allowed an opportunity to respond luckily:

I am shocked to hear from friends that a Calvin Young is disparaging me in this Group. I have never met him, and this is not the first time that he has done so. I’m surprised that Admin has allowed his post. I am unable to see it, he possibly having blocked me.

The background: Calvin is a friend of Michael Shange, who sits at the Tidal Pool begging for money from locals and day visitors, supposedly for use to clean up Camps Bay. Michael worked for me and for Suzanne Ackerman Berman in cleaning Camps Bay last year, but both of us had to let him go, because of his unreliability and dishonesty. Michael is busy with a very active begging campaign in the past two weeks.

I work with Joel from the Safe Space homeless centre in town, who comes here every second Saturday. I pay him from the contributions which our kind Camps Bay residents have made to me to keep Camps Bay clean.

Please let’s keep donations and contributions in Camps Bay. Thank you to all for support, and for standing up for me Haley Conolly van Aswegen and Tracy Jackson.’

The Corona Virus Lockdown (Level 5), announced by our President Cyril Ramaphosa earlier to commence on 27 March and to continue until 16 April, subsequently extended to 30 April, lowered to Level 4 from 1 May, and lowered to Level 3 from 1 June, is an unprecedented event in my lifetime. I am posting my daily Facebook post to journal this Corona Lockdown Journey, perhaps to serve as material for a future Book.