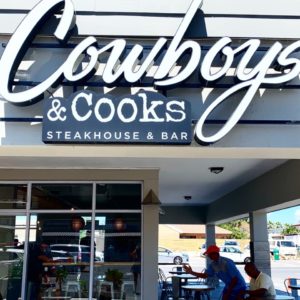 Yesterday a group of ten writers was invited by Jack & Jill Communications to attend a Media Lunch at the recently opened Cowboys & Cooks, the new steak restaurant and bar in Sunset Beach, owned by Michael Townsend and operated by Stuart Bailey of the C & C Group. We tasted various starters, main courses, and desserts, and were told what good quality Chalmar Beef the restaurant serves, and were shown the cuts, and explained the taste profile of each. Writers were astounded by the reasonable prices of the dishes, when they perused the menu.Cowboys & Cooks Steakhouse & Bar was created by Michael Townsend, one of his three new restaurants, with Sevruga in the Waterfront, and a new boutique restaurant being developed in Sea Point, which will open later this year.  It is planned to open further Cowboys & Cooks Steakhouses and Bars, on the corner of Rheede and Kloof Streets in town, and in Stellenbosch. Michael had always wanted to open a 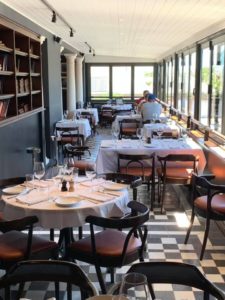 Steakhouse, and Cowboys & Cooks is a synergy of Tiger’s Milk and Hussar Grill, the latter group of restaurants having belonged to Stuart before he sold them to the Spur Corporation. The new restaurant opened on 28 November, and will be officially launched this evening. Michael founded the Harbour House Group over twenty years ago, creating strong restaurant brands such as La Parada, and Tiger’s Milk. Stuart (in the photograph below) joined the Group, working his way up to COO, before he and Michael left the Group a year ago. In 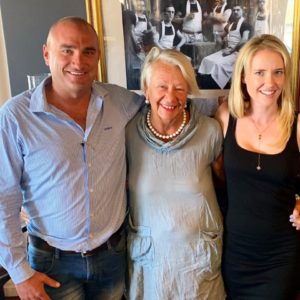 Cowboys & Cooks they have created a modern edgy sexy steakhouse, which caters for families with children too.

The restaurant seats 130 patrons, and has done extremely well in building a client base amongst Sunset Beach and Table View residents, many even driving from the centre of town to taste the excellent steaks. Stuart emphasised that while many chefs open restaurants in trendy areas, they have chosen a suburban area like Sunset Beach, which has never been serviced by a good quality restaurant. Michael and Stuart are taking the new restaurant so seriously that they are 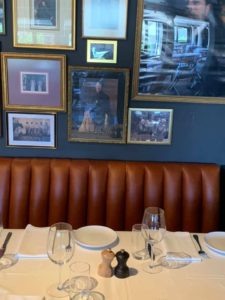 creating additional exclusive parking for Cowboys & Cooks patrons. Stuart shares that the landlords are so impressed with the quality of the new Cowboys & Cooks restaurant and the patrons that it is attracting, that they are investing in upgrading the centre infrastructure.

Tables are covered in starched white table cloths, reflecting the seriousness of the dining experience offered, with white napkins, and Baguette stainless steel cutlery. Each table has luxury Peugeot wooden salt and pepper grinders. At our table olives were offered 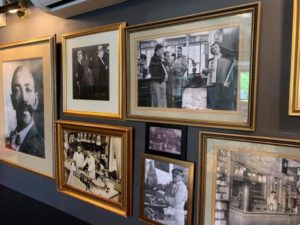 in bowls. The restaurant has a library look in some sections, with shelves of books, brown leather 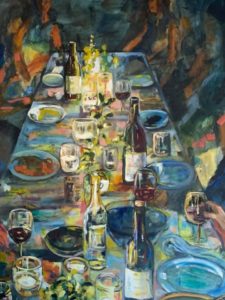 banquettes, many framed photographs on the walls, and a large original oil painting by Cael Nel. One section houses a large bar, with bar chairs. The kitchen is open-plan, and its cooking equipment reflects the trend to charcoal grill cooking, the grill especially made up for the restaurant. The Chalmar Beef used exclusively in the restaurant is 100% grain fed and free-range, more expensive to source, but the best quality that it can offer. 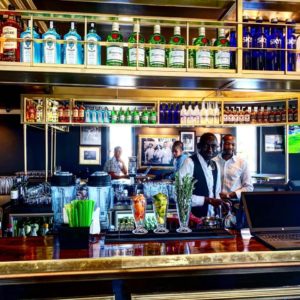 We were offered water, which I stuck with throughout the lunch, Bloedlemoen Gin & Tonic on tap 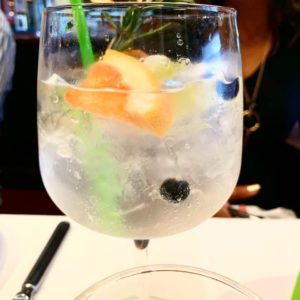 , as well as white and red wines. Leather bound menus with good quality board for the pages typed in a classic Typewriter typeface show a reasonably sized offering of Starters, Mains, and a small offering of Desserts. The line fish for the day was salmon, served 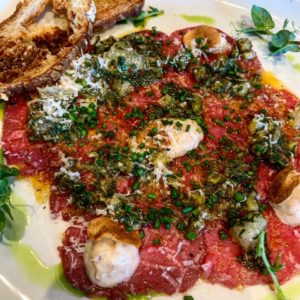 with salsa verde, and Japanese mayonnaise (R180).  A main course of grilled calamari costs R118, while grilled prawns are SQ.

Starter platters were the following: 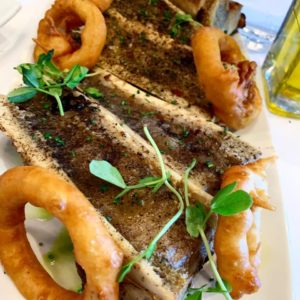 #   Black mushrooms filled with a mix of other mushrooms, spinach, and feta, a rich starter costing R68

#   Mussels – I did not taste these, being allergic to mussels. They are steamed, served with a garlic and wine cream sauce. (R125)

#   Calamari – I loved the grilled baby calamari tubes, with a lemon taste, served with chilli and lime butter (R78)

Very impressive was Phumeza bringing a wooden board with various cuts of meat to our table, and quickly and 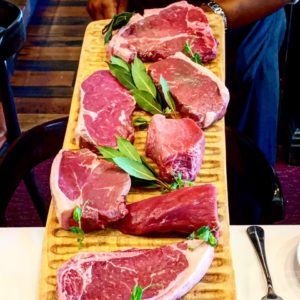 confidently telling us about each:

#  500 gram melt-in-the-mouth T-Bone, the marrow in the bone infused into the steak (R290), we were told. Ideally it is eaten with a sauce, or topped with a Café de Paris butter.

#  300 gram Ribeye steak, which is more tender than Rump or Sirloin, she said, having fat throughout the 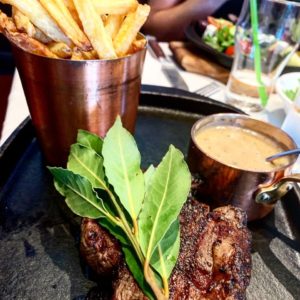 #  Fillet has no fat, and a sauce served with it was recommended when ordering this cut. There are two styles of fillet:

*.  Tail cut fillet, a fillet mignon, and also the cut used for Chateaubriand (R235 for a full portion), which is flambéed at the table with brandy, and usually served with a Bearnaise sauce. Chantel (my table neighbour) and I shared this dish, with the 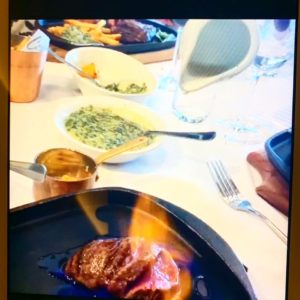 meat flambéed with the brandy at the table. We had chosen a Café de Paris butter, with herbs, and anchovies,  instead of the Bernaise sauce, the fillet being incredibly tender, and tasty, melting in my mouth. I ordered roast butternut and grilled barbecue mushrooms with the fillet, these being superb.

#  300 gram Sirloin steak on the bone, which has more marbling, the fat giving the steak more flavour. (R180) 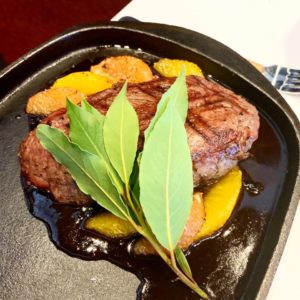 Stuart told us proudly that a number of his staff worked with him at the Hussar Grill in Camps Bay since 2006. 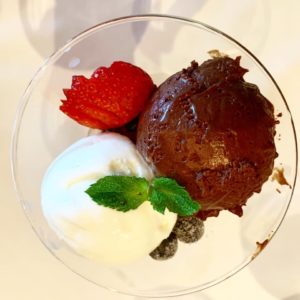 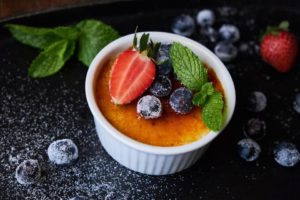 Dessert options are limited to a mouthwatering Cognac Chocolate Mousse, with a scoop of vanilla ice cream, and a strawberry; Créme Brûlée; oven-baked cheesecake; and vanilla ice cream and chocolate sauce, costing R55/R65.

The Winelist is included in the Menu and takes up more space than the Food offering. Vintages are not specified per wine. Prices are reasonable, wine-by-the-glass prices ranging from R55 – R98 for white wines, and R 65 – R95 for red wines. In the ‘Bubbles’ sections Veuve Clicquot Yellow Label champagne is offered at R950, as well as local MCCs Graham Beck (R400), and Pongracz Brut and Brut Rosé (R115 per glass/R350). De Luca Prosecco is available at R95/R285.

It was a lovely lunch, with excellent food and service, and a great camaraderie amongst us writers, not everyone knowing everyone else at the start of the lunch.

Disclosure: We were spoilt with a generous professionally packaged Media Goody Bag, which including a USB stick with the media release, a R200 Uber voucher, a voucher for a return visit to the restaurant, and two bottles of Constantia Royale Sauvignon Blanc 2017.