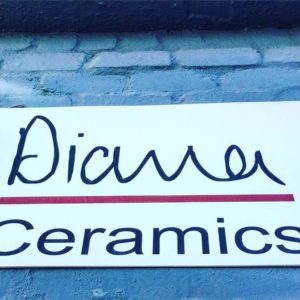 On Thursday I attended a function in the Cape Town Harbour, and spontaneously called ceramicist Diana Ferreira, to ask her if I could visit her studio in Paarden Eiland close by. Diana is one of our country’s leading ceramicists, specializing  in restaurant dinnerware. 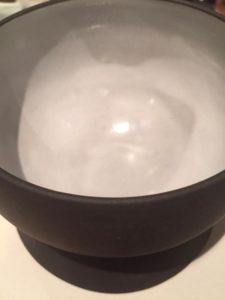 reputation. She has a umique design style, black clay being her distinctive colour, and the lip on her plates is another unique Diana design style.

When she runs through her client list, it becomes obvious how powerful her reputation is.  Her first Michelin star restaurant client is JAN in Nice, owned by Chef Jan-Hendrik van der Westhuizen. He featured her work and studio in his Blog earlier this year, and even more orders flowed in as a result. Her client list is a Who’s Who of top restaurants in our country, including La Colombe, Ellerman House, Greenhouse, Terroir, Tokara, Neill Anthony The Private Chef, Benguela on Main, Singita, Overture, Mondiall, Bukhara, Social Kitchen in Exclusive Books Hyde Park, La Parada, Myoga, Kokkedoortjie, The Kitchen at Maison, Ryan’s Kitchen, and Chef’s Warehouse (having just completed the order for their new Beau Constantia branch opening soon). She has clients in Dubai, Amsterdam, and in Berlin too. 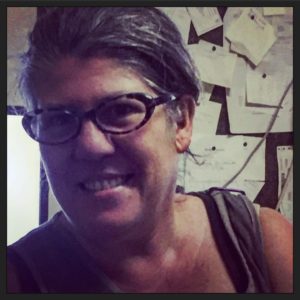 Diana was extremely open about her past, telling me that she had been working as a nurse. At the age of 40 she had a ‘midlife crisis‘, wanting to get out of the medical field. Initially she made glass beads. Her former boyfriend was a mould maker for Continental China, one of the top such persons in the field, and from him she learnt how to make moulds. She got into ceramics seven years ago, and set herself apart in working with black clay, of which she had made some samples to display at Design Indaba.  Chefs Eric Bulpitt and PJ Vadas of The Roundhouse became her first clients, wanting her work. She also was the first to supply restaurants with plates without a lip. She said that the beginning was a battle, and she was tempted to return to nursing, but The Roundhouse order was a breakthrough, and things in her business became better over time. Making her own moulds has given her an edge.

Diana told me that a lot of her work is repetitive, and it is while she is doing this work that she thinks of new products to make and new glazes to use. She is admirably hands on, doing all the glazing herself. She works with her colleagues George and Rosie. She has four kilns, with a smaller one which gives her a quick turn-around time.

We talked about ceramic trends for dinnerware. She said that she is unlikely to create new plate shapes, because it would mean new moulds to make. White remains a popular colour for chefs. She is seeing a trend to plates with a patterned texture, and linked to glazes too.

Diana told me that she is having such fun in her business, and that she does not want her old (nursing) life back.  She is a recognised dinnerware designer, and her creative work is assisting in putting our country’s restaurants on top local and international restaurant lists, with an increasing international clientele too.

Disclosure: Diana gave me a gift of a ball bowl with a stand, in the photograph on the right above.