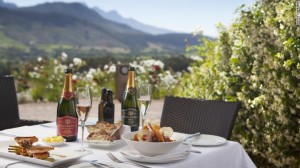 In my book CNN is a credible news agency, but this image has been severely dented by an article entitled ‘7 stunning Cape Town vineyards with food as good as the wine’, written last week by one Griffin Shea. Not one of the seven wine estates featured are in Cape Town!

The article introduction is short and sweet: ‘It’s no secret that in Cape Town, good wine abounds. But wine farms also host some of South Africa’s best restaurants, which pride themselves on serving up meals from ingredients often grown just steps away from the tables. These restaurants have won enough awards to fill walls, but like so many of South Africa’s best places to eat, they’re generally relaxed, unpretentious affairs where the prices won’t break the bank. Many of the menus are deceptively simple, heavy on local ingredients and farm fare, but prepared with passion and care’.

It does not state on which basis the wine estates were selected, but obviously they had to have a ‘great‘ restaurant, and are ‘stunning‘!  All seven wine estates are in Stellenbosch and Franschhoek, in which area alone there must be more than a hundred such wine estates, let alone another hundred or more in the Winelands of the Western Cape as well on the two wine routes in Cape Town!

Intrigued by this geographic error, I Googled Griffin Shea, and discovered that he is the (Johannesburg-based) publisher of Griffin Guides and SmartApps, which are available for African cities Cape Town, Durban, Johannesburg, Lagos, Luanda, Maputo, Nairobi, Port Louis, and Pretoria. The Cape Town page entries were all written on one day (15 May) by Veronica Nyathi, and cover a mix of accommodation ranging from the Twelve Apostles Hotel & Spa, the One&Only Cape Town, and Ellerman House, to lodges, as well as art galleries and shops, theaters, tourist attractions such as Table Mountain, and a handful of pedestrian restaurants, none of them based in the Winelands! One of the roughly 40 entries is ‘Franschhoek and Stellenbosch Winelands‘, demonstrating how geographically challenged and lightweight Griffin Guides is, sharing the following: ‘Visiting the Franschhoek and Stellenbosch winelands requires at least a day trip from the city. If you’re short on time, Franschhoek is more contained, making your journey all the more enjoyable as you walk along the streets lined with shops and some of the finest dining in South Africa (and the world). In Franschhoek, start from the church in the charming town center. 29 Huguenot Rd’. Clearly Griffin does not know Franschhoek and Stellenbosch, writing nothing about the latter at all!!

The seven wine estates with restaurants featured are:

*   Haute Cabriere: ‘fine dining inside of a mountain‘!

*   Noble Hill: no details about the wines, ‘high-end Mexican food‘.

*   Spier: ‘kids can range as freely as the chickens‘, focus on Eight ‘farm-to-table restaurant‘.

*   Babylonstoren: contrasts the Cape Dutch architecture and history with the ‘modern sensibility about cooking‘.

*   Jordan: ‘regularly ranked among the best in South Africa‘, and Jardine at Jordan is one of only two Eat Out Top 10 restaurant on the list.

*   Hidden Valley:   The Eat Out Top 10 Overture restaurant name is not mentioned, but its focus on traditional South African dishes is, including the onion salad ‘slaaphakskeintjies‘ (sic)!

Referring to the ‘best restaurants‘, combined with views and good wines, one is surprised that more wine farms were not included, especially in Stellenbosch, which has become the Gourmet Capital of our country. Obvious omissions are Delaire Graff with its two restaurants, Boschendal, La Motte, Grande Provence, Maison, Tokara, Cavalli Estate, Waterkloof, De Grendel, Steenberg, Rust en Vrede, Simonsig, Kleine Zalze, to mention a few.

Mariette du Toit-Helmbold has worked hard at creating brand ‘Stellenblog‘, her new name for Stellenbosch, and she must be devastated that all her marketing services for the Stellenbosch Wine Route have gone to waste as the ‘Stellenblog‘, ‘Stellenbosch‘, and ‘Franschhoek‘ (yes, she does the marketing for #FranscHHoek too, selling its unique benefit of having two Hs in its name!) brands do not appear in the article at all, even though the wine estates are located there! Perhaps she should have stayed on at Cape Town Tourism!

One hopes that CNN will appoint a writer with a better sense of geography for our region, and preferably based in Cape Town or the Winelands. It is sad to admit that had the writer been true to his headline, he would not have had more than two ‘stunning’ wine farms/restaurants on his list for Cape Town!