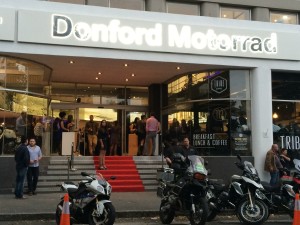 Cape Town has a new new-generation BMW Motorrad Cape Town lifestyle showroom on Buitengracht Street, a pilot 2600 m² hub for motorcyclists, and home to a smart Tribe restaurant.  The German BMW Motorrad CEO is extremely happy with how the Donford BMW Motorrad Cape Town has turned out, the first of a new-generation of lifestyle stores they will open up around the world.  The centre is an extension of Donford Motors in Stellenbosch, which sells BMW vehicles as well as motorcycles.  The design was done by Kalla Smit of TV3 Architects and Planners.

The red carpet was literally rolled out on the steps of the building which once housed the Bloomberg antique car showroom, and we felt quite out, male bikers dominating the guest list.  The showroom had been standing empty for some time, and Donford Motors’ Mark Philp and Leon Potgieter bought the building.  Leif Geuder from BECC (Brand 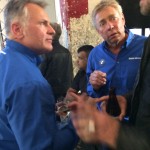 Event Communications Concepts) agency, BMW’s design agency in Munich, and Johannes Spreng from BMW’s head office, traveled to Cape Town, and worked on a design that reflected the soul of the building as well as of Cape Town, and was authentic.  As one enters the vast space, one sees the Tribe restaurant on the right, new and used motorcycles on the left with image wallpaper in the background, and straight ahead more motorcycles in blue, picked up in jackets and helmets lining the back wall. At the far back is the BMW motorcycle repair workshop, behind a one-way window one cannot see through.  Up above is the BMW Motorrad slogan of ‘Make Life a Ride‘, and a 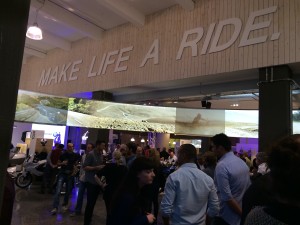 number of posters embodying this slogan.  It took four months from the designers’ visit to the opening of the lifestyle showroom, a very fast turn-around time.   The design of the Cape Town showroom is unique, never seen before, and probably unlikely to be copied. Showrooms in China and in South America are on the cards.  There are no guidelines set in stone for the design of BMW Motorrad outlets around the world.

Leon explained their motorcycle customers’ needs: ‘From having run both a BMW car dealership and a Motorrad, we learnt quickly that our customers want to get to know motorcycles at their own pace. They really just want a space where they can spend time, where they can feel comfortable and relaxed. They want to come in and listen to stories and tell their own stories and we wanted to create that environment for them’.   He added: ‘Today’s customer already expects that a motorcycle will have all the technical capability needed. The challenge is to convince them that the bike will give them the lifestyle that they want. This new emphasis comes at exactly the right time!’  Customer service is the foundation of Donford: ‘In our business, we don’t have a reception area because everyone is a receptionist, and everyone is responsible for the customer’.

We were welcomed by Mark, whose father Donald had opened Donford in Stellenbosch as a franchise, still operating after 40 years. 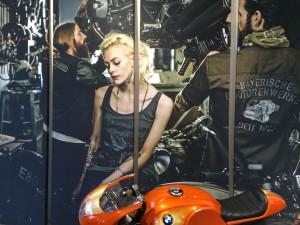 Mark told us that a year ago they had attended a BMW presentation about the ‘Future of Motorcycles and Lifestyle‘.  They felt that they should invest in the brand, and presented a plan to BMW, to which the feedback initially was that they were out of their mind.  Alexander Baraka, General Manager of BMW Motorrad South Africa, was instrumental in Donford getting the Cape Town franchise, trusting Mark and Leon, and the BMW head office specified that it be in Cape Town, a city in which they did not yet have a presence for motorcycles.   Mark and Leon had visited a number of BMW Motorrad outlets in Europe, including Milan. A business plan was presented for the Cape Town outlet at the BMW head office in Munich, and what was proposed resulted in ‘90 years of BMW Motorrad design be turned on its head‘!  The building has a long history, and the designers chose to retain some of the exposed brickwork in the walls, linking the heritage of BMW and Cape Town in the building. Cape Town hosting World Design Capital 2014 was an added attraction for BMW to open a motorcycle lifestyle showroom in Cape Town.

The Tribe Coffee Roasting restaurant has a long table at which one can sit with others, there is seating in the window facing the street, and there is a 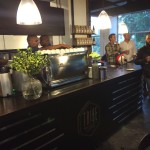 coffee table with a glass sheet resting on Boxer engines from BMW motorcycles. There are black leather 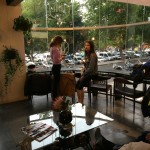 couches with the finest red stitching, so discreet that one has to be shown it to see it. The chairs are unusual in design, never seen elsewhere in Cape Town. Hanging plants by Opus Studio soften the hard mechanical interior elements. There are silver lines in the design which give the Tribe section an Art Deco feel.  Pendant light fittings were made from motorcycle engine parts.

Mark explained the collaboration with Tribe: ‘We want to entice non-motorcyclists to come in and experience the Cape Town lifestyle. We’d like people to come and enjoy the café, people who aren’t necessarily there for the bikes, and who might then want to venture out onto the floor and visit our beautifully engineered products. What better way to do this than with a café that has wonderful coffee? That’s why we positioned the café right at the front of the showroom, looking out onto the street’.  The interior designer was Michelle Trimborn 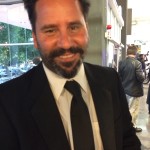 of Design Quarters. We spoke to Jake 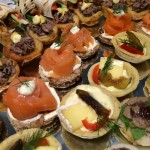 Easton of Tribe, who is very excited to be part of the new lifestyle showroom, having a roastery and coffee shop in Woodstock. Jake told us how they treated the floor, to give it an old garage feeling. They do sell their coffee to other restaurants (e.g. The Lunch Depot), and the dry cappuccino I drank was very strong.  Chef Maureen Muller will be in the kitchen.