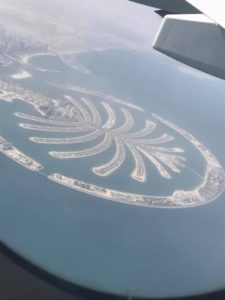 I had the misfortune to experience Dubai under less than perfect conditions, and with it Emirates airline, which once was the best airline in the world (now dropped to number four, as rated by Skytrax)! A City Tour by Sun Tours helped to restore my appreciation for what Dubai has to offer!

A comedy of errors began when Flight Centre called me on Friday afternoon, to tell me that our 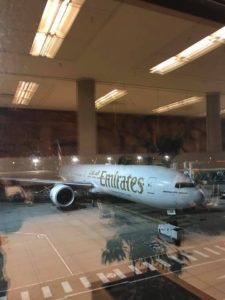 flight to Nice via Dubai was delayed by two hours. This meant that my Dubai-Nice flight would be affected, and that I would have to stay in Dubai for the night, only able to travel a day later. I had planned everything for this trip so well, but started feeling palpitations when I received this news, as Flight Centre Garden’s Centre branch read me the terns and conditions, saying that it was the airline’s right to postpone flight departure times, irrespective of the effect on connecting flights. Flight Centre had no clue as to my rights as a passenger, where we would stay, and what the food and beverage arrangements would be. Flight Centre knew nothing, acting as if this had never happened before to a flight that they had sold tickets for. They referred me to the Emirates desk at Cape Town International airport. The desk knew nothing either. They told me to speak to ground staff in Dubai. 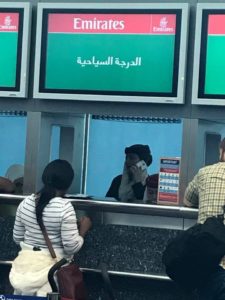 Dubai was not prepared for a plane-load of Capetonians arriving with no knowledge of our onward connections. A Connections set of desks had one staff member, which grew to four when I lost my cool about the shocking service. We were not welcomed nor were we offered a drink or seating. It took 90 minutes to receive a replacement boarding pass for the replacement flight, and a hotel voucher, which included buffet meals. Promises made for inclusions were broken. Interaction by the Emirates staff was rude and self-righteous, with no empathy expressed. Directions to find the hotel desk in the massive airport, at the opposite end to where we arrived, were vague. Here we had to wait for a shuttle, making it three hours between arrival in Dubai and arriving at the Copthorne Hotel Dubai, a three-star Emirates-owned dive!

Instead of being shown the hotel check-in desk, we were herded into the Buffet restaurant, to finish the Breakfast Service. For each meal we had to show our Boarding Pass. The more than 600 hotel rooms appeared to be occupied by passengers who had missed flights, not many looking happy! We could have any egg style, as long as it was 10 minute hard boiled! Almost all the accompanying foods were finished and not replenished.  My request for a dry cappuccino was declined rudely by a Manager, one only being able to drink what the machine can make, and a dry cappuccino was not on the menu. When I checked in, there was another queue. The wifi password had to be fetched from the Business Centre. I asked whether Emirates, which owns the hotel, and which caused the problem, would pay for all of us Capetonians to go on the City Tour, given that we were in a city we had no intention of spending 24 hours in. The hotel receptionist laughed at me! The bar fridge in my room did not work, and despite reporting it to the porter on checking in at midday and again to the Reception at 16h00, nothing had been fixed on my return at 22h30. It took an hour to get an ice bucket (a little Tupperware container) with a few blocks of ice, and the fridge replaced. 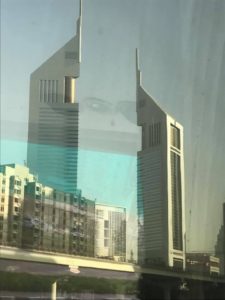 Sun Tours organized the two-hour and Foyr-hour city Tours, as well as desert safaris with dune drives, as well as Traditional Dhow Dinner Cruises, with a desk in the Copthorne Hotel. They wanted to charge an additional fee for paying by credit card for the City Tour, and I protested, as this extra cost was not specified in their brochure. They blamed the card machine company, but I did not have any charges added elsewhere for using the credit card in the time that I was in Dubai. The Manager kindly reduced the card fee, and the booking was made.

Our tour guide was Errol, herding a large Tour bus full of us to various highlights in Dubai, traveling down the wide Al Shief Road, on which we saw numerous tall buildings. Our first stop was at the famed Al Farooq Omar Bin 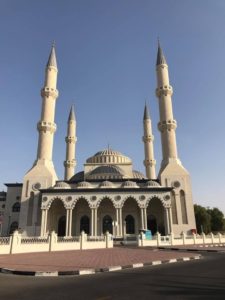 Al Khattab Mosque, referred to as the Blue Mosque, one of 1500 mosques in Dubai, and one of the largest in the city, large enough to hold 2000 worshippers. The Blue Mosque is named after the well-known Mosque by the same name in Istanbul, and is located in a residential area. We were each given a bottle of cold water, the temperature being just over 40C. All religions are respected in Dubai.

Dubai became known for its oil in the ‘Sixties, but since then concentrates more on Tourism (main source of income now) and Trade. It is one of seven Emirates of the United Arab Empire UAE) , with Abu Dhabi, and five others. The UAE supplies 10% of the world’s oil. Dubai is the Cultural Capital of the UAE, and Abu Dhabi the official capital. The 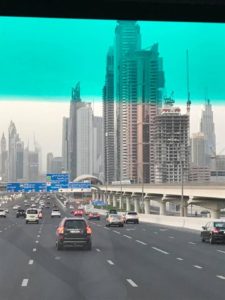 two cities are 160 km apart. Foreigners may not own property, but can lease on a 99 year freehold system.  Dubai has a population of 2,5 million, and the UAE 9,2 million.

We sweltered on the hot day, and everything is air-conditioned, short of getting in and out of a bus! The summer temperature peaks at 48C, 53C being the highest ever recorded temperature. Winter temperatures range from 17-23C.

We were told that 80% of Dubai’s water is desalinated, and only 20% comes from natural sources. Dubai only receives 15cm of rain per year, and the water is recycled extensively.

Our tour guide confused us with the number of records which especially the 5-star hotel buildings in Dubai hold. So, for example, the JW Marriott Hotel Marquis in Dubai is the tallest hotel building in the world, with Burj Al Arab 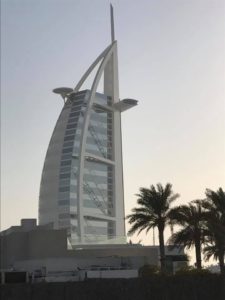 (photograph left), and Emirates Tower Two (photograph above left, with 65 floors ) being on the world’s tallest hotel list too.  We drove past the palaces of the Royal Family, and saw the area in which other members of the family have their homes (to put it mildly), each with a private beach!

One of the best-known areas in Dubai is the Palm Jumeirah, 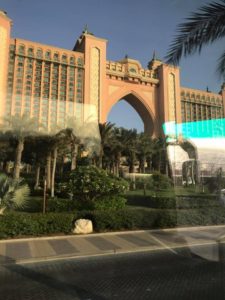 the layout of the residential and hotel area being in the shape of a palm tree, but only visible from the air (main photograph) and not at all when one drives through it. It was created on reclaimed land. It also has the Aquaventure Waterpark, and Dolphin Bay. It has nineteen 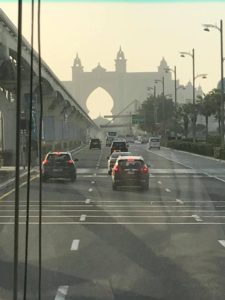 hotels, one of them being The Atlantis, a sister hotel to the one with the same name in the Bahamas, built by Sol Kerzner.  It has 1539 rooms. $16 million was spent on the fireworks alone, for the launch of the Atlantis Hotel! Rates range from $500 to $4300. The world’s leading hotel brands are found here, including One & Only, Kempinski, Sofitel, Taj, and Waldorf Astoria.  One section of the roadway in the Palm Jameirah is built underwater. A second Palm is being constructed, which will be even bigger than Palm Jumeirah.

The highlight for most of us was the Dubai Fountain Music, behind 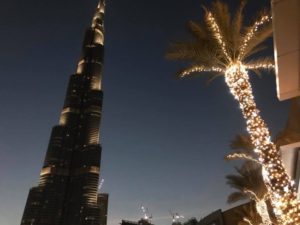 the Dubai Mall (with 1200 shops, fortunately walk-through only!) and alongside the Burj Khalifa, 828 meters in height and the tallest building in Dubai and in the world, with 160 storeys. In the evening 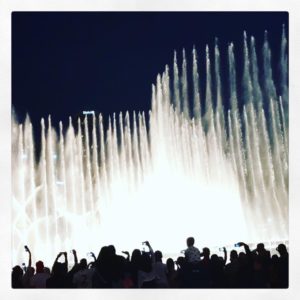 the water fountains are synchronized to songs, a different one every half an hour, until 23h00. The water, light, and music ‘performance’ was very dramatic, almost sounding like fireworks at times. The show we saw, at no charge, was Adele’s ‘Skyfall’. The song changes each half hour. It is the world’s tallest performing fountain. There is no sales tax or income tax in Dubai. I think that it is still an expensive city, judging by the cost of  a dry cappuccino at Dhms 15 (about R50) in Dubai Mall. 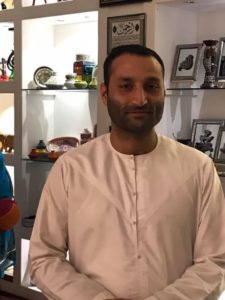 chocolate confectionary, and home goods. It was unbelievable that one of the staff approached me, and started speaking to me in German, not knowing anything about me. He told me that he had lived in Hamburg for a while. I asked him how he knew, and he told me that he just did!

Our tour ended at a Soukh market, consisting of two sections: a 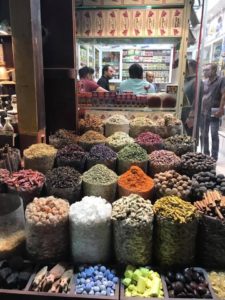 Spice Market, which seemed to have many spice stalls, with each offering almost identical spices.  The Gold Market consisted of numerous stores selling gold jewelry in particular. We saw the world’s largest ring, in the window of one of the jewelry shops, and certified by Guinness. The Sun Tours brochure informed that Dubai is known as ‘The City of Gold’, due to its many gold jewelry shops.

I loved the name of the Dubai Creek, which made me think of a dry river bed in the USA. It is exactly the opposite, being a wide passage of water, allowing boats to enter its Harbour! 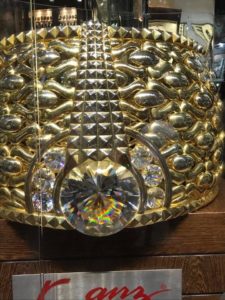 We arrived back at the Copthorne Hotel Dubai, a measly 3-star hotel, and were once more herded into the dining room, with most of the dishes served at lunch time served at dinner time too!

I was lucky to sit next to Thembie on the bus tour, who had also 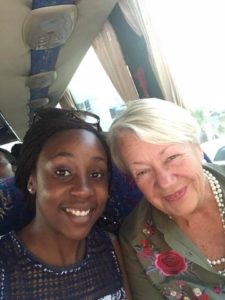 flown in from Cape Town, and was heading to Missouri, to further her studies, via an Emirates flight to Boston. Thembi had also lost her connecting flight due to the late arrival of the Emirates flight in Cape Town.

Yesterday morning we received an old-fashioned wake-up call, at 6h00, so that we could get to the airport in time for our flight to Nice. The service and quality of aeroplane and food was very much better than we had experienced on the Cape Town leg of the Emirates flight!

I will not easily book an Emirates flight again.