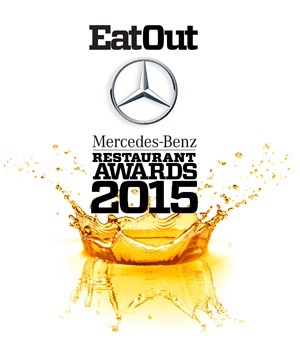 On Sunday the eagerly awaited Eat Out Mercedes-Benz Restaurant Awards 2015 winners will be announced at its Gala Lunch, to be held at new event venue SunExhibits Centre at GrandWest. As is our tradition, we attempt a prediction of the Eat Out Top 10 winners as well as comment on the other awards to be presented at the Lunch.

The Mistico Equestrian Centre outside Paarl had been criticized as the Eat Out Awards venue, and I was told telephonically by Abigail Donnelly today, when I called to chase the  invoice for the Lunch, that due to ‘unforeseen circumstances‘ the venue for the Awards has been changed to SunExhibits Centre on the GrandWest property. Abigail laughed (almost hysterically) and said it was Friday the 13th. This was followed up by email, providing new directions. Mistico are refusing to provide any details, and have referred me to New Media Publishing for further information. It is most odd that a function venue be changed two days prior to the event, not reflecting well on both parties! Earlier this year we called the venue choice ‘a dark horse’, and may not have been too far off the mark!

Our prediction for the Eat Out Top 10 Restaurant Awards follows below, in no particular order. We apologize to the chefs left off the list in advance, given the tough competition this year:

The Test Kitchen – Chef Luke Dale-Roberts’ restaurant ranked 28th on the World’s 50 Best Restaurants in June, with no other local restaurant to challenge it in the number one spot. Whether the award should go to Head Chef Ivor Jones or to Chef Luke is another question.

Mosaic at The Orient – I have eaten Chef Chantel’s food at two Chefs who Share dinners, and at her restaurant 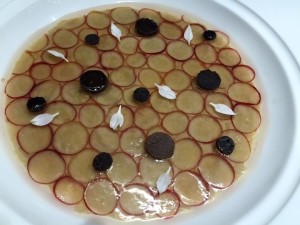 outside Pretoria last week, and was impressed by the ingenuity of her dishes, and her beautiful plating. White glove service for cutlery changes, small  service issues from waitrons and sommelier.

The Tasting Room – Chef Margot Janse, in her 20th year at the helm of the Le Quartier Français kitchen. 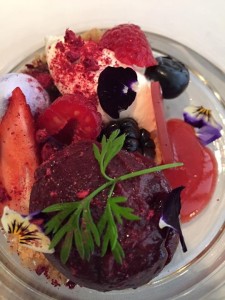 DW Eleven-13 – the restaurant is hard to find, but once inside, it is slick, organised, with discreet service that impresses, with immaculate bathrooms, and exceptional flavours in Chef Marthinus Ferreira’s dishes, most of which he brings to the table himself. He apologized profusely for his inappropriate acceptance speech of last year when I visited last week.

La Colombe – the move to their new venue at Silvermist has done the restaurant well, and Chef Scot Kirton and his team are receiving rave reviews.

Rust en Vrede – very low on the restaurant radar, and the loss of Sommelier Joakim Blackadder may have affected service.

five hundred – Chef David Higgs has announced his departure for 11 December, and has handed over the running of the kitchen to Chef Candice Philip, whilst still overseeing the operation for the next month. Very impressive service in chefs bringing plates to the tables, and explaining the ingredients, with white glove service for cutlery changes, on a visit last week. Very unexpected disappointing service from sommelier and restaurant manager. Surprising is how many chefs feel that Chef David does not deserve the award, given that he is leaving, and that he has travelled so much this year. I do not agree, given that he has been honorable about announcing his resignation due to opening his new restaurant 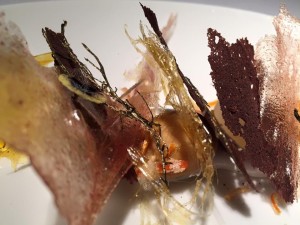 in March, and that he has allowed Chef Candice to take over so that she has the full year in the kitchen, to qualify for the Eat Out Top 10 Restaurant Awards for 2016, despite the uncertainty about  Luke Dale-Roberts moving into five hundred as a pop-up from 21 January  – 31 March, using the current five hundred staff. We do know that it will be called ‘Luke Dale-Roberts at The Saxon‘, and will offer a seven-course dinner on Tuesdays to Saturdays at R1330 without wine/R2100 with wines, far more expensive than five hundred. This may mean the end of the five hundred brand, which is synonymous with Chef David. Other Top 20 chefs, including Chef Bertus Basson from Overture and Chef Luke Dale-Roberts from the Test Kitchen, have been away from their kitchens this year. In the past two chefs resigned a month after receiving their Top 10 Restaurant Awards, which is less than honourable.

Overture – our view is that the restaurant does not deserve nomination this year, as it has a new Head Chef Adele Grewar, who has not been in the Overture kitchen for the prescribed twelve months.

Jordan Restaurant with George Jardine – it has its favorites, and has undergone an interior upgrade. It lags behind other competitors in this regard.

That brings me to ten restaurants, and other than five hundred being excluded due to Chef David’s departure (which should not be, as it is a retrospective award), it leaves the younger guard (with two exceptions) out in the cold:

Chefs Warehouse & Canteen  – I have motivated why this restaurant does not belong on the Top 20 list, it not being fine dining, its decor not being at the level of the other competitors, it having limited choice, Chef Liam Tomlin moonlighting at Singita, etc. The granddaddy of chefs has not taken kindly to my feedback, and has unfriended me on Facebook, and got his friends and suppliers to badmouth me on my Blog! One wonders how he will react if he does not make the Top 10!

Foliage – bad mushroom incident at the restaurant, no license for wines for 6 months. Chef Chris Erasmus made Top 10 two years ago whilst at Pierneef à La Motte.

Camphors at Vergelegen – low key feedback about the restaurant from diners. Made Top 10 two years ago when the kitchen was headed up by Chef PJ Vadas.

The Restaurant at Waterkloof – the food creativity and plating by Chef Gregory Czarnecki is exceptional, but the service is not.

Indochine – Chef Virgil Khan is praised for his excellent Asian dishes, made Top 20 in 2013 too.

Tokara – Chef Richard Carstens has been waiting patiently for a Top 10 slot, but it may not happen this year due to the competition from the ‘old guard’. If five hundred does not make it, then the slot should go to Chef Richard.

The Kitchen at Maison – Chef Arno Janse van Rensburg travels to kitchens internationally in our winters, but the restaurant is not fine dining enough to make the Top 10.

Pot Luck Club – the restaurant belongs to Chef Luke Dale-Roberts too, and we know how Abigail feels about Chef Luke. However, there is no space in the Top 10 for a second restaurant.

Other awards presented on Sunday will be:

San Pellegrino Chef of the Year – will it go to Chef Chantel Dartnall of Mosaic again? 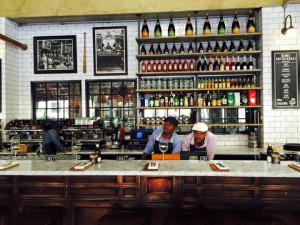 Judges for the Eat Out Top 10 Restaurant Awards were Abigail Donnelly, Jackie Cameron from the Jackie Cameron School of Food and Wine, blogger and Food Network presenter Siba Mtongana, and MasterChef SA judge Benny Masekwameng. Not everyone is happy with the judges choice, which was influenced by Mercedes-Benz specifications, it is said.

The chefs preparing lunch on Sunday have been announced, and attendees are holding thumbs that it will be better than last year’s Gala Dinner:

Interesting is the paragraph in Eat Out‘s announcement: ‘The Chef’s will be collaborating with Byron de Carvalho of Foodsters to ensure a knockout meal for all guests’! Last year the Gala Dinner meal, at a cost of R1800, was a disaster. De Carvalho is a trained chef who has cooked on yachts, in top local kitchens, and started Shesha Film Food. The Foodster Group, a collaboration with ex-Taj marketing executive Theo Cromhout, does not appear to have its own website, so does not explain how it differs from the Shesha Film Food company. Both companies have a Facebook page, but this does not clarify the role of each.  The food photographs on De Carvalho’s own website look superb. De Carvalho is an unknown entity in the Cape Town food scene!

We look forward to Sunday, and wish all our top chefs the best of luck!

POSTSCRIPT 13/11: Interesting is the feedback re the venue change which we have received from a commenter to this Blogpost!  ‘Hi, Word is the venue change goes hand in hand with the firing of Foodsters who under quoted the other bidders and then were not able to meet agreed requirements such as free student labour and sufficient equipment for a course featuring pies of some sort. Should be quite a mess considering the chefs are more adept at feeding 40 guest with a dedicated team of 15 or more at staggered times instead of 200 plus plates at once. Another money-grabbing fiasco, methinks!’

POSTSCRIPT 14/11: I have been told that the reason for the venue change is the fly problem on the Mistico Equestrian Centre estate, which was discovered yesterday!

POSTSCRIPT 16/11:  My informers were spot-on! Flies were the reason for the venue change. Foodsters and Eat Out had parted ways before Friday already.