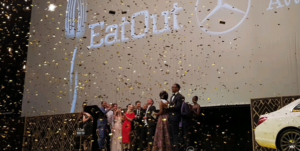 At the Eat Out Restaurant Awards 2017 this evening, held at GrandWest, some shock results stunned the restaurant industry. Eat Out continues its love affair with Chef Luke Dale-Roberts, with three of his four restaurants making the Top 10 Restaurant List, a spectacular achievement! The biggest shock was the spectacular slide of La Colombe, the restaurant which had all the opportunity to make the number one slot, but only making the seventh rank, a karmic reaction to the restaurant losing focus, opening too many restaurants, and getting involved in restaurant politics!

Linked directly to this Top 10 Restaurant List is the following Awards: 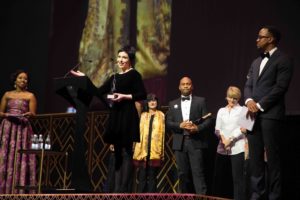 #.  Eat Out S. Pellegrino & Acqua Panna Chef of the Year: Liam Tomlin of Chefs Warehouse & Canteen on Bree Street, a restaurant which won Best Tapas restaurant in the Eat Out Everyday Eateries Awards last month, but which could not even make Eat Out Top 10, in fact making only the 21 – 30th rank, a miserable performance! Once again it shows Eat Out amending its past procedure with regard to this Award, the fourth slot chef even winning this award, as happened last year. Surely this Award should have gone to Chef Ivor Jones from Tomlin’s Chefs Warehouse at Beau Constantia, having made the fourth slot on the Top 10 Restaurant Awards List?!

The ranking of the restaurants in 11 – 20th position was mentioned for the first time this year. Eat Out expanded the list of Finalist restaurants from 20 to 30 this year, leaving at least ten bitterly disappointed Restaurants this year:

Other Award winners were the following:

#.  Eat Out Retail Capital New Restaurant of the Year: La Petite Colombe, a surprise that the restaurant which only opened on 1 August received this accolade so soon after opening, given that Eat Out would have had to make the decision in the first month of operation of this restaurant, to send the Eat Out magazine to print! Interesting is that Chef Jan-Hendrik van der Westhuizen announced this Award at the event! We made a case that his Michelin-star restaurant JAN should have made the Eat Out Top 10 Restaurant List, being the best South African restaurant in the world!

Eat Out Top 30 Restaurant shortlist 2017: Why is JAN restaurant missing? Chefs Luke vs Liam, breaks its own eligibility rules on three restaurants!!!

#   Eat Out Graham Beck Chefs’ Chef, selected by chefs, but the procedure for this vote and eligibility were not defined by Eat Out: Kobus van der Merwe, of Wolfgat in Paternoster.this is a new Award,  introduced this year.

#   Woolworths TASTE Eat Out Bursary: Bryan Mlotshwa, who will be studying at the Jackie Cameron School of Food and Wine.

Complaints were aired on Twitter about the quality and quantity of the food, or lack of, and the poor shuttle service between the car park and the event venue.

It was the first year since writing about Restaurants in over ten years that I have not attended the Eat Out Awards, having left my booking far too late, and being on a waiting list with 79 others. Next year I will book immediately!