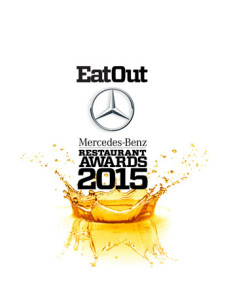 The Eat Out judges are doing the rounds in evaluating our country’s Top 20 restaurants, from which they will pick their Top 10 Restaurants for 2015, to be announced at a Gala Lunch at Mistico Equestrian Centre outside
Paarl on 15 November.

Last year a number of restaurants made it to the Top 20 shortlist, possibly by default, as the largest number of chef changes ever took place in 2014, making the restaurants linked to those chefs ineligible to be considered for an Eat Out Top 10 award.  This affected Hartford House (Chef Jackie Cameron starting her Jackie Cameron School of Food and Wine), Delaire Graff (Chef Christiaan Campbell joining Boschendal), Camphors at Vergelegen (Chef PJ Vadas opening The Hog House on the Werf at Spier next month), and Pierneef à La Motte (Chef Chris Erasmus opening his Foliage restaurant last year).

This year the changes at Executive Chef level have been minimal, with Chef Constantijn Hahndiek at Hartford House being one of only two senior chef appointees who will not be eligible for the Eat Out Top 10 Awards this year, as he has only worked at the KwaZulu-Natal country hotel for the past six months. Chef Hylton Espey at Equus at Cavalli Estate took over from Chef Henrico Grobbelaar earlier this year, and therefore also is not eligible for the Top 20 shortlist this year. Eat Out rules dictate that the most senior chef must have worked at the restaurant from 1 November 2014 until 31 October this year. Some movement has been visible at the lower chef ranks this year, but this does not influence the restaurants’ Eat Out Top 10 status.

Interesting is that Eat Out has changed its judges for the Top 10 evaluation, of which three are Abigail Donnelly, Chef Jackie Cameron, and Blogger and Food Network UK presenter Siba Mtongana. The name of the fourth male judge eludes us currently! Chef Benny Masekwameng, MasterChef SA judge for Seasons 1, 2, and 3, has been 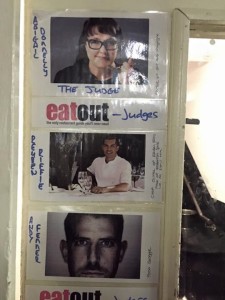 seen eating his way around Cape Town and the Winelands too, but at restaurants that would be considered candidates for the Eat Out ‘Best Of’ awards, which does not make sense, as these will be chosen on the basis of a mathematical calculation of all the reviews on the Eat Out website, or so Eat Out says!  Chef Benny has, however, also visited Maison and The Tasting Room in Franschhoek, for example, both of which are Top 20 shortlist 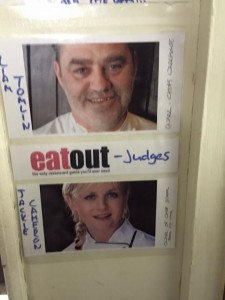 candidates.  Funny is seeing the photographs of potential Eat Out judges in restaurant kitchens, even if they are largely out of date! Sneaky is that Abigail Donnelly books under an alias, and so arrived at one restaurant recently at which not one of the senior staff was on duty that day! In another instance, a brand new restaurant front-of-house person did not recognize Abigail, and insisted that there was no space for her at the restaurant, until a waiter intervened, having recognized her! A table was quickly organized!

We have excluded the following restaurants from the Top 20 Restaurant shortlist prediction: 9th Avenue Bistro in Durban and Harvey’s in Umhlanga, having been dissatisfied with both restaurants when visiting in August, leaving KwaZulu-Natal without any representation this year; Bosman’s at Grande Roche has not made Top 20 for a while, and the hotel is waiting to get sold!, Babel at Babylonstoren has gone under the radar as far as its chef goes; The White Room at Dear Me, on the Top 20 shortlist last year, closed down after the departure of Chef Vanessa Marx; Café Chic only opened in February this year, so will not be eligible this year; and The Werf at Boschendal only opened in April, so is not yet eligible. David Higgs’ departure from five hundred will not affect the restaurant’s eligibility, as he is handing over in November, and leaving in December.

Our Eat Out Top 20 Restaurant shortlist prediction is as follows, in no particular order :

*  The Tasting Room at Le Quartier Français, unaffected by the purchase of and take over by Leeu Collection

*.  Mosaic at The Orient, last year’s Chef of The Year, and Chef Chantel Dartnall went on a trip to 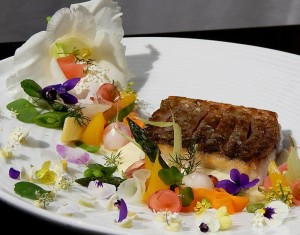 South East Asia this year, to broaden her inspiration (photograph)

*.  La Colombe, the move from Constantia Uitsig to Silvermist having done Chef Scott Kirton and his team the world of good!

*.  Jardine at Jordan, the decor having been a let down in the past, but said to have undergone a renovation.

*.  Overture is a tricky one, as Chef Bertus Basson has handed over the kitchen to Chef Alistaire Lawrence at Spice Route and to Chef Adele Grewar at Overture, and spends a month away for The Ultimate Braaimaster filming, as well as time traveling overseas. Both chefs have not spent a full year in their respective restaurants.

*.  Terroir has been in and out of the Top 20 shortlist, but still has its loyal fans, despite being expensive.

*.  Indochine* made it to the Top 20 shortlist in 2013, and is highly regarded for Chef Virgil Kahn’s Asian cuisine.

*.  The Greenhouse at Cellars-Hohenhort has just had a decor makeover, and Chef Peter Tempelhoff’s withdrawal from the Mondiall partnership should stand him in good stead, freeing him up to concentrate on the restaurants in the hotel group.

*.  Foliage is eligible to be in the Top 20 shortlist, Chef Chris Erasmus having opened his own restaurant in June 2014. Will the recent incapacitation of guests eating mushrooms count against the restaurant?

*.  Staying in Franschhoek, it is time that Chef Ryan Smith be recognized for his spicy small-plate cuisine at Ryan’s Kitchen. The move of the restaurant to its new home in Franschhoek’s Place Vendome has given his restaurant a tremendous lift, opened him and his wife Lana up too, and transformed his cooking, making this one of the finest Franschhoek restaurants now.

*  Grande Provence* has been on the Top 20 shortlist since Chef Darren Badenhorst took over the kitchen, with the exception of last year. He seems to have withdrawn, and is very low-key, but did make the Finals of the S. Pellegrino Young Chef of the Year for Africa and the Middle East this year.

*   Chef Michelle Theron was Chef Chris Erasmus’ right hand at Pierneef à La Motte*, and took over the kitchen when Chef Chris left to open his own restaurant last year. I was disappointed with my last dinner there, the service levels falling short, a baby allowed at dinner, and the food presentation not being up to standard. The restaurant should not be eligible for Top 20, with its Culinary Director Hetta van Deventer having become a reviewer for Eat Out, a serious conflict of interest!

*   Chef Rudi Liebenberg of Planet Restaurant* at the Belmond Mount Nelson has been on the Top 20 shortlist since he moved to Cape Town. He has not made the Top 10 whilst at Planet.

*   Last year Chef Eric Bulpitt (with business partner Chef George Jardine) made it onto the Top 10, in his first year of opening The Restaurant at Newton Johnson in the Hemel-en-Aarde Valley. He may have been lucky in making Top 10, with so many restaurants not eligible last year,

*   Delaire Graff has Michael Deg in the kitchen, one of the new generation chefs who have inherited their kitchens through their Executive Chefs leaving, as happened last year when Chef Christiaan Campbell moved to Boschendal.

*.  La Mouette was delighted to make the Top 20 shortlist last year. It has since done an interior decor upgrade.

*   Springfontein Eats* has been very low-key in the past year, and despite Chef Jürgen Schneider having owned a Michelin-star restaurant in Germany, the restaurant did not make the Top 20 shortlist last year. Perhaps it will be luckier this year.

*   Tokara has been unlucky, its Chef Richard Carstens not having made Top 10 since he joined Tokara. He has been on the Top 10 list whilst he was at a number of other restaurants in the past.

*   Waterkloof Restaurant has a most talented Chef in Gregory Czarnecki, especially for his plating, but he seems to have lost his passion, no longer sharing his beautiful dishes. When I last ate there, I was disappointed by the service staff, who seemed to do their best to ‘sabotage’ the good work done by the kitchen team.

*   Makaron* at Majeka House receives both good and bad feedback.

*   Many feel that DW Eleven-13* will not make the Top 20 shortlist this year, given the stream of expletives by Chef Marthinus Ferreira at the 2014 Eat Out Awards!

*   Chef Michael Cooke at Camphors at Vergelegen is very low-key, and was previously at La Colombe. I have not heard of anyone eating there and providing feedback.

*.  Maison Chef Arno Janse van Rensburg impresses with his annual food trip, Denmark having been his destination this year. The restaurant has become very expensive, and I experienced my worst value for money for a dessert when they re-opened after their winter break.

*.  Borage Bistro* is eligible, but their marketing is low-key and does not sell the tremendous credentials of Chef Frank Marx, who has worked with Chefs Luke Dale-Roberts and Heston Blumenthal. The demise of its Manager may be a blessing!

*.  Burrata* is eligible to be in the Top 20, its Chef Stephen du Bruyn having headed up the kitchen since Chef Annemarie Steenkamp moved across to sister restaurant Bocca last September, and to Open Door in May.

*.  Azure* at the Twelve Apostles Hotel & Spa is eligible for Top 20, Chef Christo Pretorius having headed up the hotel kitchen for more than a year, after the departure of Chef Henrico Grobbelaar.

The list above has stretched to 30 restaurants, far beyond the requirements for the Top 20 shortlist.  I have marked with an asterisk which ten restaurants may have a lesser chance to make the Top 20 list, given the larger number of contenders.

POSTSCRIPT 9/9: We have received further feedback that Chef Benny Masekwameng has been eating at Eat Out Top 20 Restaurants on our shortlist! Chef Vanessa Marx, formerly of Dear Me, has also been observed eating in the top restaurants.