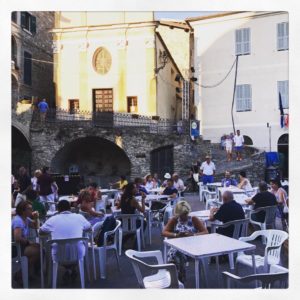 Yesterday evening I ventured up the steep lane to the square in the village in which I am living in Liguria province, celebrating not only the Catholic religious holiday of Ferragosto, the Assumption of the Virgin Mary, but also a successful first two days of writing my book. 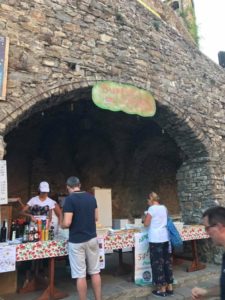 village square over some weeks, which was finishing off last night. I decided to experience it, to get a feel for Ligurian cooking, or so I thought. I had been to the square the day before, having indulged in a dry cappuccino and a coffee gelato at one of the two restaurants on the square. Last night these two restaurants carried on with their trade, but the locals had set up a temporary Buffet Del Teatro, and seating in the square, to tie in with the Theatre Festival. The idea was that one eat at about 19h00, it still being light, and then enjoy a theatre performance, for which one had to pay extra. I loved how the sun shone onto the Catholic Church overlooking the village square, given the public holiday. 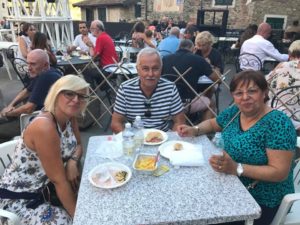 I saw a lone lady sitting at a table, and asked her if I could join her. She agreed, after asking me if I was ‘solo’. Her parents joined us shortly, and so began a conversation via slow speaking, sign language, and Google!

The food offering was more basic than I had expected, on the savoury side at least, the offering 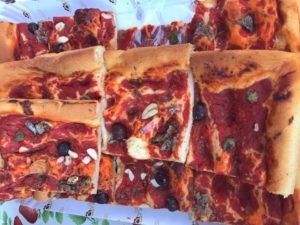 being focaccia, pizza, torta verde (chard and ricotta pie), and panino (sandwiches with salami, other cold meats, and with cheese and tomato), costing between €1-3. Beer was charged at €3, a bottle of local wine €9, a glass of wine €1,50, and coffee at €1. 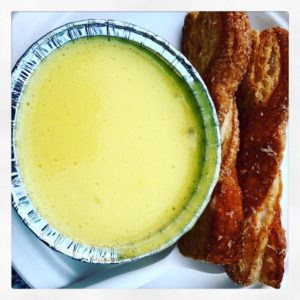 I am trying to avoid eating anything containing flour or sugar, in continuing my journey of weight loss, but I could not resist ordering the traditional Italian dessert Zabaglione, at €5, it being served warm. It is made with egg yolks, sugar and Marsala, the ingredients being whisked over a double boiler until thick like custard. I also spotted a beautiful looking Tiramisu, 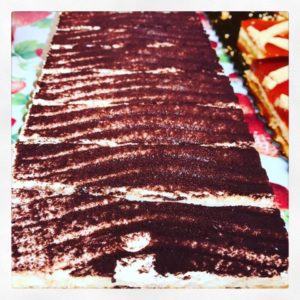 offered in slices, at €3, which I took home as a treat for today. It is a coffee-flavored Italian dessert, made with finger biscuits dipped in coffee, layered with a whipped mixture of eggs, sugar, and mascarpone cheese. 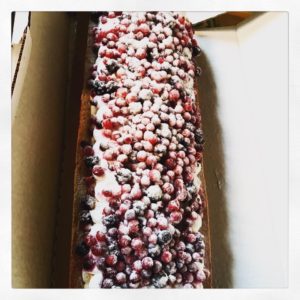 I saw a Berry Torta as well, which had not been cut into slices, covered with cream and berries.

There were two more Tortas, one a chocolate and the other an apricot one, both attractively presented, and each costing €3 per slice too.

We had an interesting conversation about why I am in 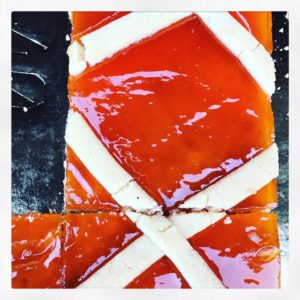 the village, and I had to try to explain in broken English and Italian that I have come to write a book. It was harder to explain the content of the book, and why I am in the village ‘solo’, with our language barrier. We spoke about Cape Town, and they saw images of Camps Bay, with the Beach, and the Twelve Apostles as a backdrop. It appeared that they had not heard of our country before!

In the village square I bumped into Barbara, a chef from Johannesburg, whom I had met the day before, and she came over to chat, it being so much easier to converse in English. She kindly invited me to join her for dinner with her family this evening.

But I was immensely grateful to my ‘adopted’ Italian family for the company for the evening, and for being able to taste the two delicious Italian dessert treats.