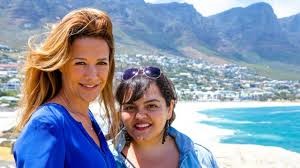 Yesterday evening ARD, the largest TV station in Germany and second largest broadcaster in the world, screened a movie ‘Einfach Rosa – Wolken über Kapstadt’ (‘Simply Rosa – clouds over Cape Town’), a most beautiful representation of Cape Town, and comes at a most welcome time to attract German tourists to our beautiful city and neighboring towns. It was filmed in Cape Town earlier this year.

The storyline briefly is that Mark and Nandi from Berlin fly to Cape Town to get married, with only four days to plan the wedding, with wedding planner Rosa and her assistant (in the photograph above, taken at Maiden’s Cove, with Camps Bay in the background) racing through Cape Town for flowers, a wedding cake, a wedding dress and suit, rings, and more.

The film showed off so much of our city’s beauty, including:

The bride-to-be’s mother lives in a mansion in what must be Bishopscourt, and she tells the father of the groom-to-be that he does not have to pay for the wedding, as he should not think that ‘black people’ in South Africa are all poor! The father-of-the groom is grumpy, complaining about the variable Internet connection. He also moans about the prices of the food at The Restaurant at Waterkloof, mentioning R1400 for a starter, ludicrous of course. He regards the price for a venison main course at €50 as indulgent and expensive! The grumpy father also makes the dreadful statement that Cape Town is the ‘crime capital of the world‘! The wedding caterers are called ‘Restaurant Stellenbosch’. The fantastic sunny weather all summer long in our city gets a very favorable mention.

The movie ends off differently compared to how things were planned, but it works out well for all the key characters of the movie! And it is Cape Town that comes out best of all!