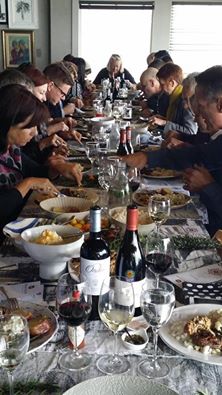 On a rainy wintry day last Sunday I and 21 other food lovers were lucky to enjoy a most fabulous five-course food feast at the seaside home of Isabella Niehaus in Langebaan, called the #LangTafelopdieDuin.

Bella is a most enterprising person, having established the Palm’s Market at the Palm’s Centre, she and many of her stallholders bringing the platteland to the city every Saturday. I met Bella there, and she has always been extremely friendly and welcoming to me.  Bella also does food styling, assists others to write books related to food, and seems to be on the go continuously.  She does one #LangTafelopdieDuin per month.

I had seen photographs of previous #LangTafelopdieDuin lunches at Bella’s house, 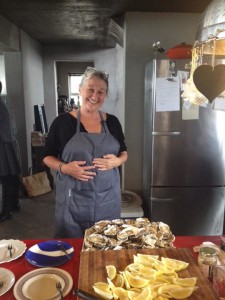 and the location of her home and view from there looked impressive.  The rain held off until we arrived in Langebaan, and Bella’s directions were perfect in finding her home.  No matter that it was grey, overcast, and cold, there was such lovely warmth in the collection of guests which Bella had assembled around her long table, set up in the seafacing room with a fireplace, and open plan to the kitchen, where Bella spent most of the time. She seemed in her element, and was not distracted by guests chatting to her, and photographers capturing her dishes from every angle. She had only one assistant helping her with the food preparation and clean-up, a collection of guests helping to clear dishes after each course.

The benefit of a #LangTafelopdieDuin lunch is the luck and joy of meeting other guests, Val and Andre Müller (he has German roots) being extremely friendly, and we landed up sitting next to each other at one end of the table, and we talked non-stop about food, restaurants, and Franschhoek. It felt as if Val and I had known each other forever! Next to Val sat RSG (Radio Sonder Grense) presenter Haidee Muller, whom I had met in their studios when I did a radio interview with Nina Timm, a bubbly and witty guest. Food writer Fritz Brand, writer of the Blog ‘Real Men can Cook’, was an avid photographer at the lunch.  I had met Karen Doyle at the Palms Market when she too had a stand, and she is now the Brand Ambassador of Ormonde Vineyards. She is a very close friend of Bella, and gave her moral support throughout the lunch. 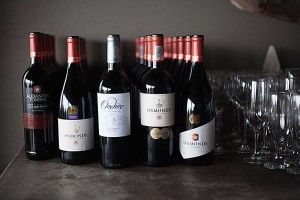 Ormonde winemaker Andre Rheeder spoke about the wines, and he had paired Bella’s courses with the Ormonde, Ondine, Alexanderfontein (the name of the family farm), and Single Vineyard Chip off the Old Block wine ranges, grapes grown in the nearby region between Darling and Yzerfontein, and their tasting room is in Darling. Guests were welcomed with an Ormonde Barrel Selection Sauvignon Blanc 2014.

Bella’s table was beautifully laid, with a table cloth covering the long table, with 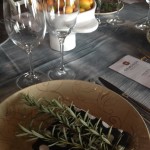 beautiful plates, a mix of material serviettes, branches of lavender on each plate setting, and bowls of kumquats adding splashes of colour on the table. Even the bottles of water looked colourful, with slices of oranges and lemon.  Bella welcomed us all, and she knew that there were some birthday people at the table, and we sang for both Alan and Anna. 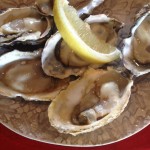 Our first course was big and juicy oysters which were sourced from the area, and were paired with Ormonde Sauvignon Blanc 2014 too.  The second course was mussels, which Andre and Karen paired with Ondine Semillon 2014.  A number of us were allergic to mussels, and Bella was kind enough to make a delicious mushroom risotto to which she had added 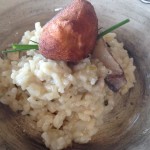 wine, and topped with a mini vetkoek, protesting that risottos are not her strength, but it was outstanding.  The wine pairing for the risotto was Ondine Chardonnay 2013.

Andre was an informative speaker, telling us the story of Undine, the origin of the name of the wine, based on a book by Frederic de la Motte Fouqué. Undine was a water spirit who longed to have a soul, and to achieve that she had to become mortal.  A ballet based on the fairytale was written specially for ballerina Margot Fonteyn. 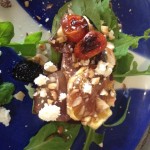 A beautiful pear salad with beetroot, orange, infused olives, nuts, and feta was paired with Ormonde Chardonnay.  The wine was named after a winning thoroughbred racehorse which did well despite having a lung defect. The analogy is that as much as the horse was thoroughbred, so are the Ormonde wines.

The main course was a real plattelandse Sunday lunch one, with lamb shank (paired with Chip off the Old Block Cabernet Sauvignon 2013), and pork (paired with Ormonde Theodore Eksteen 2008 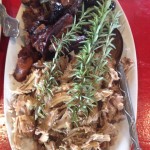 , named after the family grandfather, and a blend of 65% Shiraz and 35% Grenache), with which was served steamed green beans, whole cauliflower with a cheese sauce, samp, a very tangy coriander and mustard sauce, and sliced sweet potato.  The Ondine Cabernet Franc 2010 was also opened for this course. 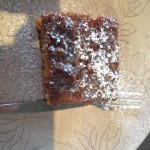 As if we had not eaten enough, Bella had created two desserts for us.  Her malva pudding had a balanced sweet taste, and it was paired with Ormonde Shiraz 2013. Créme Brûlée was served in small sweet glass containers. 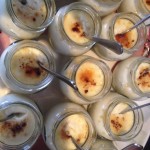 The afternoon sped by because we had such a good time. Before we knew it, it was 17h00 already, and the trip back to Cape Town was lying ahead.  It had been a wonderful afternoon, new friendships had been made, and Bella was more than generous with her fabulous food feast, as was Ormonde Vineyards with their special wines.

Disclosure: I received a bottle of Ormonde Shiraz 2013 from Karen Moyle when I left.  I was a guest of Bella at the lunch.