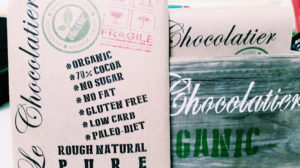 Last year I was subject to an urgent interdict in the Western Cape High Court with a demand to remove a Blogpost about the misleading packaging which Le Chocolatier had used for its chocolate slabs, claiming them to be sugar-free and Banting-friendly. In a landmark case in terms of freedom of speech and defamation in digital Social Media, Judge Dennis Davis refused the demand for my Blogpost to be taken down, with only two sentences required to be removed from the Blogpost. The case sets a precedent for future cases regarding defamation on Social Media platforms.

The Blogpost was based on an article in Noseweek, published in July 2015, as well as a Facebook page entitled ‘Le Chocolatier South Africa Scam’, on which various interested parties documented their tests of the product claims:

At the outset of the hearing, Judge Davis disclosed that he is diabetic. He acknowledged that eating a chocolate that claimed to be ‘sugar-free’ could prove to have dire consequences, even leading to loss of life, for diabetics.

After the hearing and Judge Davis’ judgement, Le Chocolatier founder Daniel Waldis, who has proven himself as a fraudster, who has sat in prison in Switzerland, and to our last knowledge has been refused re-entry into our country, tried to persuade me via What’s App messages to remove the post, claiming that it was costing his company in lost business, and that it would be good for me spiritually! I have ignored his request.

My legal firm MHI Attorneys requested permission to write a story about the case, for its client newsletter, given its historical value, which follows below:

On 21 November 2016 Judge Dennis Davis handed down judgement in the Western Cape High Court in the matter between WALDIS AND ANOTHER v VON ULMENSTEIN 2017 (4) SA 503 (WCC).

In this case an urgent application was instituted by Le Chocolatier, a producer of premium chocolate products, and its founder, Daniel Waldis (“the Applicants”), against Christiane Von Ulmenstein, represented at the hearing thereof by MHI Attorneys and Advocate Adam Brink. Von Ulmenstein is a blog writer and restaurant reviewer who writes generally about tourism, restaurants and wine, focusing on Cape Town and the winelands area. The relief the Applicants sought was an order to interdict her to remove the allegedly defamatory post made on her blog as it then was: www.whalecottage.com [now www.chrisvonulmenstein.com].

FACTS:
Von Ulmenstein’s blog post dated 23 July 2015 followed on an independent article published in July 2015 in Noseweek, a national magazine, which focused on allegations regarding the mislabelling by Le Chocolatier of its chocolates as ‘sugar-free’ which allegedly was not the case. Von Ulmenstein’s article focused on the same subject matter and highlighted how such practices may be life-threatening to diabetics. The article further challenged the labelling of said chocolates as organic – contending it was a fraudulent claim by Le Chocolatier. Von Ulmenstein further challenged whether Le Chocolatier’s chocolates were handmade. Von Ulmenstein wrote that these chocolate slabs were imported as chocolate bars from abroad and remade into slabs prior to being sold by Le Chocolatier. Her blog post lastly contained paragraphs of alleged financial difficulty Le Chocolatier faced at the time and described its founder as a fraud looking for business opportunities even at the expense of the health of its consumers.

The Applicants argued that the blog post was defamatory as it attempted to portray them as dishonest and fraudulent, because Von Ulmenstein had not properly verified the facts contained therein as accurate. The Applicants further argued that the blog post infringed their right to privacy and Le Chocolatier’s right to take part in day-to-day commercial activity without the fear of being unfairly defamed. Von Ulmenstein’s defence was that her blog post constitutes fair comment. Furthermore, the post is truthful and made in the public interest as it relates to public health.

The Applicants countered that von Ulmenstein cannot plead truth and public interest as a defence, because the information was already in the public domain due to publication by Noseweek, as aforementioned. The Applicants further contended that her post was untruthful and made solely with the intention to defame the Applicants.

In respect of a report submitted and relied upon by the Applicants regarding the sugar content of its chocolates, Judge Davis found the report to be ‘extremely vague’. A further report submitted and relied upon by the Applicants, compiled by the Cape Winelands District Municipality following an inspection of Le Chocolatier’s products, conducted in terms of s 82 of the National Health Act 61 of 2003, was held to show that there was some form of mislabelling of the Applicants’ products at some point in time, which necessitated relabelling. Accordingly, Judge Davis held that the defences of truth and public interest, as well as fair comment, could be relied upon by Von Ulmenstein in the circumstances.

However, Judge Davis found that parts of the blog post were beyond justifiable under the abovementioned defences and that these parts were accordingly defamatory. To this extent Judge Davis ordered that Von Ulmenstein delete the parts of the blog post relating to the chocolates being life-threatening to diabetics and relating to Le Chocolatier’s founder being a fraud who looks for business opportunities even at the expense of the health of his customers.

Von Ulmenstein was awarded costs in respect of a wasted hearing on 12 May 2016. However, no other award in respect of costs was made.

CONCLUSION:
The judgement represents an innovation in respect of the relief granted. Judge Davis opted to allow the entire post to remain published save for the above two offending sentences. Accordingly, Judge Davis did not consider the defamatory parts as having tainted the entirety of the blog post, and the publication of the remainder of the post was justifiable. Such an order is only possible with modern forms of publication which allow for subsequent editing thereof, as opposed to traditional forms of publication such as newspapers and magazines which require the entire article to be retracted.