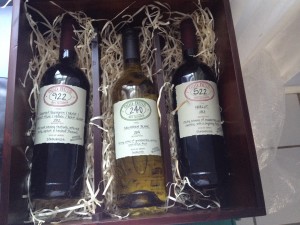 Last night we were a group of about 40 participating in the first Virtual Twitter Tasting of three Checkers Odd Bins wines, paired with a selection of cheeses from Checkers.

The secret of the Checkers Odd Bin is explained on the back label: ‘Every so often we manage to bring you the odd bin or two of wine from a famous  wine farm. To be able to offer you these exceptional wines at a price far lower than what you would pay for them under their original labels, we have vowed to keep their origins a closely guarded secret.  However, once the wine has been tasted, we are certain that its secret shall be revealed‘.  The Odd Bin front labels look hand-made and appear hand-written, and the dominant information is the bin number.

The invitation to participate in the Twitter Tasting was received via e-mail from Checkers, the retailer having selected the participating Tweeters.  As promised, we received an sms to the value of R160, allowing us to select three cheeses, each within a range of cheese suggestions per wine to be tasted, with  a recommendation made by Checkers as to the most suitable cheese.  On Monday we received an (unannounced) delivery of  a beautiful wooden presentation box with the three wines.  A general invitation had been Tweeted, for wine lovers wishing to participate in the Tweet-up to buy their own wines and cheeses, and join the Twitter conversation.

The tasting panel was Anel Grobler of Spit or Swallow, her husband Jan Laubscher from Wine Times, Karen 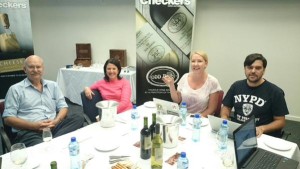 Glanfield of #UnWined, and an unnamed  Checkers advisor, to whom we could direct questions.  At 19h00 we had to introduce ourselves with a pre-written Tweet which was part of our Tweet-Up information. Anel was in charge, and she specified the order of tasting the three wines:

1.  Bin 240 Sauvignon Blanc 2014 from Durbanville, described on the bottle as having strong notes of gooseberries, nettles, and citrus fruit, was priced at an unbelievable R39,99.   Checkers had recommended Halloumi to be paired with the wine, but also suggested ricotta, Mozzarella, and feta.  We had bought the Dairy Belle Halloumi. 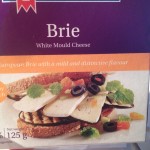 Bin 522 Merlot 2013 from Stellenbosch was described as having fruity aromas of raspberries and cherries, with a lingering finish. The price of R49,99 is equally reasonable.  The cheese pairing recommendation by Checkers was Embroy Camembert (we could not find this at Checkers, so chose an Emborg instead!), but other options were Edam, Ementhal, Gouda, and Gruyère. 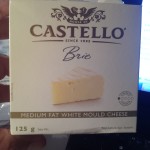 and Petit Verdot) also was from Stellenbosch, also cost R49,99, and was described as having a rich and creamy texture, with red berry apricot and tea-leaf flavours.  The cheese recommendation by Checkers was Wyke Mature Cheddar, but other suggestions were Brie, Camembert, Roquefort, Pecorino, and Parmigiano, the first three cheese styles having being selected most frequently by Tweeters.

It was a fun way to get to know the Checkers Odd Bins range, not known to most of the Tweeters.  It also introduced many to the Checkers cheese range, the Wyke Mature Cheddar receiving a thumbs-up in particular.   The Twitter Tasting trended during the virtual tasting.